Rosario Dawson Joins Her Love on the ‘Lead With Love’ Tour

Rosario Dawson Joins Her Love on the ‘Lead With Love’ Tour 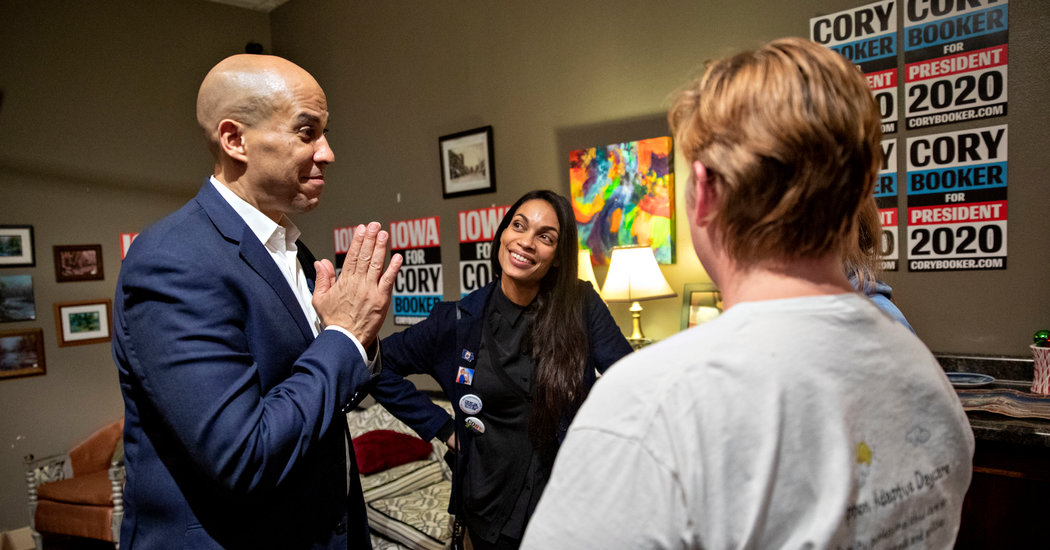 IOWA CITY — Senator Cory Booker was in a frantic sprint for a little extra zest in Iowa.

“Baby, if you want salsa it’s in the last aisle!” shouted Rosario Dawson, the actress, activist, singer and fashion designer, as Mr. Booker dashed past the organic chips, tossing a bag of their favorite, Forager Super Greens, onto their growing checkout counter pile.

With $100 of vegan campaign trail goodies from Natural Grocers purchased in a five-minute barnstorm of the store, they piled into an S.U.V. to the next event on Mr. Booker’s four-day blitz across Iowa that his campaign has called the “Lead With Love” tour.

For a candidate whose campaign theme is an overall message of love and unity, who uses the word “love” more often than a wedding playlist does, who ends his stump speech emotionally telling crowds, “I see you, I love you,” having Ms. Dawson on the trail brought a more intimate kind of love into a day on the trail.

Running for president can be both intensely personal and personally lonely. Staff becomes family, but loved ones are usually far away. For Mr. Booker, the senator from New Jersey, and Ms. Dawson, who have been dating for more than a year, the time apart can seem unrelenting; he spends every waking moment campaigning for president and, she — aside from her time spent working on projects, and for organizations and companies — appeared in more than a dozen shows and films in 2019 alone.

“It was a very emotional night last night because we haven’t seen each other,” Ms. Dawson said on Saturday, in the midst of campaigning with Mr. Booker. On top of a busy professional schedule, she has been helping her 62-year-old father through surgery for pancreatic cancer. “This stuff is intense. It’s really strenuous,” she said. “And it’s so public all the time, that there’s a really beautiful intimacy somehow that we’ve created and maintained on this journey that’s been really important for me going through this personal journey.”

The couple does find ways to talk almost every day, they said. Mr. Booker famously reads her books over the phone, and sometimes leaves the day’s passage on voice mail, as he goes page by page. They’re currently working their way through “Welcome to the Monkey House,” a selection of short stories by Kurt Vonnegut.

“The first story we read, it’s a romance story about a bumbling guy reaching for a woman well out of his league,” Mr. Booker said of the short story “EPICAC” in the Vonnegut book.

“That was his choice,” Ms. Dawson said, as they both started giggling. “He was like, I know the first one to start with.”

And Mr. Booker uses breaks in campaigning to make it to Ms. Dawson’s events. He joined her on the red carpet for the premiere of “Zombieland: Double Tap,” which features Woody Harrelson — “he was chatting up Woody about veganism,” Ms. Dawson said, laughing — and the couple was the last to leave the after party.

Her scheduled arrival in Iowa so excited Mr. Booker that it took a special plea from Ira Lit, his college roommate who is volunteering in Iowa for the campaign, to get the senator to agree that after 15 hours of campaigning he needed to go to his hotel, shower, rest and wait for Ms. Dawson, rather than drive another hour to meet her at the airport.

When Mr. Booker arrived at his hotel at midnight, he raided the minimart, his 6-foot-3 frame walking unsteadily back to the front desk as he balanced stacks of Oreos, crackers, water bottles and other snacks in both arms. “Rosario might be hungry when she gets in,” he explained to the bemused staffers looking on.

He couldn’t help mentioning her in his stump speech at every stop on Saturday, even calling out to her midsentence as he was offering a donation to the Center for Workers Justice of Eastern Iowa to ask if she had his wallet.

At an event in Davenport, Mr. Booker took a question from someone named Athena, which prompted an aside about Ms. Dawson’s film credits.

“My girlfriend is recognized because she was in this movie,” Mr. Booker said, referencing the popular “Percy Jackson” fantasy films. “She played a Greek goddess.”

Some candidates’ spouses have taken on roles of their own: Chasten Buttigieg, the husband of Mayor Pete Buttigieg of South Bend, Ind., is a popular surrogate and fund-raiser; Jill Biden, who has a doctorate in education and is married to former Vice President Joseph R. Biden Jr., gives policy briefings; Jane Sanders is the most important adviser for Senator Bernie Sanders of Vermont; Bruce Mann is about to campaign solo for his wife, Senator Elizabeth Warren of Massachusetts. But Ms. Dawson is the lone political partner who is independently famous and a better-known figure than her significant other.

Yet she also slid seamlessly into the surrogate role for Mr. Booker at a half-dozen campaign events in Iowa over the weekend. She has braved the post-debate spin room in the past, and often sees her own selfie lines form on the trail.

“He’s the only candidate on the stage at the debate talking about, ‘We need to address the child poverty system,’” she said as a gaggle of women formed around her after taking selfies with her in Davenport, echoing the candidate’s message that his voice and platform need to be on the December debate stage.

Ms. Dawson, of course, is no stranger to politics. Growing up in New York City, she helped her mother campaign and canvass for local politicians, “licking stamps and envelopes and pushing for local city councilmen and women.” She was an active surrogate for Mr. Sanders during the 2016 primary. She co-founded Voto Latino, a nonprofit voting rights organization, 15 years ago; is active in the Lower Eastside Girls Club of New York; and is on the board of V-Day, a global nonprofit to combat violence against women.

The thought of running for office herself has occasionally crossed her mind.

“I’ve had definitely a lot of friends who called me Senator Dawson over the years, which cracks me up,” she said. “I’ve always been sort of curious about it.”

A goal of her time on the Iowa campaign trail, however, would also meet a need for the Booker campaign. Though the team has taken an R.V. on the road in both Iowa and New Hampshire, no one on the campaign currently has much experience driving the bigger vehicles.

But Ms. Dawson does.

“I would drive an R.V. in a heartbeat,” she said with a laugh.

Both Mr. Booker and Ms. Dawson recognize that their time together on the trail may be limited — Mr. Booker jokingly asked the crowd in Davenport to invite Ms. Dawson to be a surrogate for him if he has to be in Washington for an impeachment trial — but Ms. Dawson said she felt the same budding energy of a late upswing that Mr. Booker said he saw around the state.

“However way this campaign is going, it’s already a success, and it has been a success this entire time because of the message that he’s putting out into the world,” she said. “No matter what, I’m having a lot of faith and hope about how this election is going to go based off of just that alone. If this energy translates into this general election, we’re going to be okay.”

The pair has been dating for more than a year, now, but they still surprise each other. Ms. Dawson was able to join Mr. Booker for his “Daily Show” appearance last month in New York. The candidate started juggling to kill time in the green room. “I started swooning,” she said, laughing.

Throughout the swing on Saturday, they stole private moments and glances, seeming to savor the time together, even if it was mostly being spent in conditions that generally minimize romance — on the road, with plenty of campaign staff and reporters nearby.

Winding through the streets of downtown Cedar Rapids, the name of a bar, The Lost Cuban, caught Ms. Dawson’s attention.

“Ha, that could be named after me,” she said.

Mr. Booker turned around from the front seat, and in a half whisper, responded: “But I found you.”