Former law clerk for Ruth Bader Ginsburg: “She had been my hero”

‘Give diplomacy a chance’: Greece PM invites Turkey for talks

Google to block political ads after US election polls close

Pope Francis: COVID-19 crisis a chance to ‘come out better’

First black hole ever photographed appears to be “wobbling” 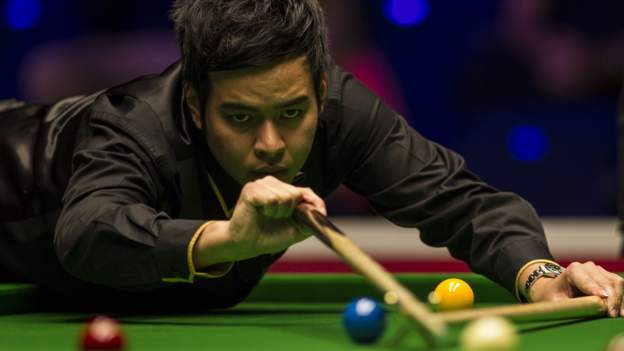 Thailand’s Noppon Saengkham caused the biggest upset of the World Championship so far by beating 2005 winner Shaun Murphy 10-4 in the first round.

Murphy missed superb chances to win the next two frames and his opponent calmly capitalised on the 10th seed’s errors.

Saengkham, 28, knocked in breaks of 60 and 76 to record his maiden victory at the Crucible in his second appearance.

He will face either Mark Selby or Jordan Brown in round two.

On the other table, Mark Allen made breaks of 136 and 105 in the first two frames before Crucible debutant Jamie Clarke responded with a century of his own in a high-quality match which Allen led 5-4 at the end of the session.

Murphy said his performance had not been affected by the sudden death of his former manager and mentor Brandon Parker, whose funeral he attended in Portugal last month.

Murphy told BBC Sport: “I was very much below par across the whole match – probably the worst two days of my snooker years came together at the worst possible time.

“My form has been good this season with two titles and other finals, so this was a shock to me.

“And I can say that the build-up to the tournament had no impact. I came here wanting to honour Brandon Parker’s memory.

“You dream of winning the title and dedicating it to him and things like that. But I would never dishonour him by saying that has caused me a problem.”

Saengkham estimated up to one million people will have watched the match in a country whose appetite for snooker owes much to former world number three and two-time Crucible semi-finalist James Wattana.

“James taught me everything – how to come here and speak the language,” said Saengkham. “He taught me how to get through because for an Asian player to come to the UK is difficult.

“I felt a lot of pressure but I just tried to concentrate on the table and not think about all those people watching me.

“For the last three or four days I have turned my phone off and not done anything on the internet. If I turn my phone back on it will be too much pressure with all the messages.”

Six-time world champion Steve Davis: “Noppom played so well, and was knocking in a lot of balls very confidently, but it could have been a completely different match with Shaun 1-0 up when he missed a ridiculously easy red in the second frame. Things went weird for him from there and it started to look like he wasn’t concentrating fully.”

Seven-time world Stephen Hendry: “Noppom’s clearance to win the match was stunning. We’ve seen top players go 9-4 up and all of a sudden get scared of the winning line. He looked so composed and he’s beaten one of the best players of the season 6-3 and 4-1 in two sessions which is very impressive.”

Former law clerk for Ruth Bader Ginsburg: “She had been my hero”