The land we came from: The river of tears and sadness 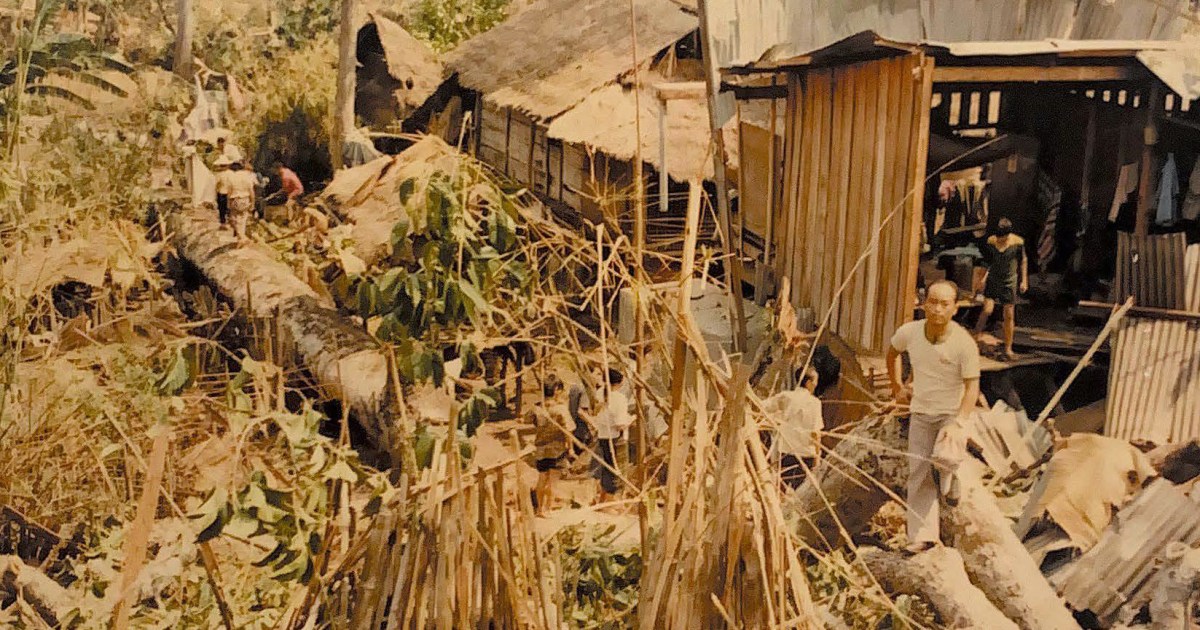 In this series “The land we came from”, we asked writers to reflect on the environment they grew up in and how it has shaped their lives. Here, author Kao Kalia Yang remembers the river of “tears and sadness” she grew up around in Ban Vinai Refugee Camp in Thailand, where tens of thousands of Hmong people fled after the Americans withdrew their troops from Laos and the Hmong were sentenced to what survivors describe as genocide by the incoming communist government in 1975.

The water smelled of growing things. The tiny rocks underneath its surface were murky and grey. The little tadpoles that swam along its banks were shaped like the surface of my nails, they gathered in groups, their little black tails moving behind them swiftly. Every night, it was my job to go and call my older sister Dawb from the river for dinner and our bath time.

Dawb, along with the mid-sized cousins, gathered along the river’s edge. It snaked near the lower part of our side of the compound, beside the bathing well with its broken concrete base. The children spent long hours, bare feet in the water, close to the banks catching tadpoles, looking for snails, and other living things. On the hottest days, the water was particularly putrid but they had long gotten used to the smell.

In Hmong, the adults referred to the river as Dej Kua Quav. It meant: River of Faeces. We children didn’t interrogate the adult name. It was the only river in our lives.

In Ban Vinai Refugee Camp, there were no other rivers, just the occasional well with its dark round mirror of the sky. We were contained on that piece of dry land, surrounded by grass hills. The boundaries of the camp swelled and grew in the wake of the wars across Southeast Asia: America’s Secret War in Laos, what was known as the American War in Vietnam, and the disastrous outcome of Pol Pot in Cambodia. For tens of thousands of us born in that captive place underneath the blazing Thai sun, that river was a source of flow, of movement, in lives that were caught in waiting.

Each night, looking up from the smoke of the fire ring, my mother said, “Kalia, go and get your sister from Dej Kua Quav. It’s disgusting. I don’t know why she insists on getting lost in it.”

Each night, I followed my mother’s orders. Cognisant that her words carried in my mouth may not be sufficient, I found myself a couple of thin fallen twigs to carry in my hands on my walk down towards the river.

My childish objectives were simple. I had no plans of using the twigs. I carried them only to wave in the air to punctuate and strengthen my words.

One particular evening, I stood at the bare banks and called for my sister time and again. Hers was one of many heads bent towards that dirty water, busy at work. A cool wind blew the dry dust around me. I turned towards it and accidentally breathed in. I started coughing.

The cough could not be contained. I gasped for air. I tried to clear my throat. I felt my own thirst. I tried to swallow it down but the cough persisted. In fact, it grew stronger and fiercer until my face grew hot and my back folded towards the ground. No one looked up or asked if I was all right.

Once I could I straightened. In the growing dark, the shape of my sister had become difficult to distinguish among the bodies peering into the river’s surface. I walked along the banks, impatient to get back to my mother, the dinner of rice and fried fish that waited, and my favourite part of the day: the evening bath.

I stopped before a small head with thick hair pulled back in a messy ponytail and examined the narrow shoulders. I called, “Dawb”. She did not answer, look up, or acknowledge me. In a fit of surprising frustration, the twig in my hand sliced through the air, not hard, but hard enough.

My cousin looked up as her quick feet climbed that sloping bank. Before I knew it, I was flat on my back. Her face was before mine. Her hands were on my shoulders. She pulled my torso up and then pushed it down. I tried to keep my head from bouncing against the ground. She screamed, “Why did you hit me? Did you think you’d get away?”

I could only shake my head in fear balanced between the hard ground and the slanted brows of my cousin, her face a flowering anger.

It was Dawb who rescued me. She who pulled my cousin away and apologised on both our behalf. It was she who dragged my tear-stained face home to our mother, who when she realised I was fine, was disappointed in me. “Why would you bring sticks? Why would you hit your cousin?” Mother shook her head at me again and again.

Although I’d never drunk water from that river (I had heard stories of children in the camp who had taken drinks from the river, gotten sick, and died), I knew that it tasted like tears and sadness. It had caused tears and sadness in my life.

My mother had six miscarriages in Ban Vinai Refugee Camp after I was born. We didn’t have much food in the camp and each time she had something to eat, a bowl of rice or a bit of meat, she’d offer it to my older sister and me first, but for her, the pregnancy losses began because of what lurked in that river.

There was a horrible monsoon storm a year after I was born. Trees on our side of the camp fell across the buildings. On a night run towards safety, my father carried Dawb and I in his arms. My mother followed with the family’s meagre belongings. The river had grown in the rains. It gushed around them. Halfway across the river, my mother tripped. She lost sight of my father’s shoulders in the soaking rain. Swirls of debris rose around her. She felt a tug, what she was sure were hands on one of her ankles. Her head went beneath the surface of the water. My father made it to the other side before he stopped to call out for her, to look for her. Through the darkness, he saw a touch of white. My father left my sister and me on the shore. He jumped and grabbed for that bit of white. It was our mother’s shirt, her body struggling for air. The family managed to escape the force of that monsoon storm, but it lingered in Mother’s dreams for years.

Somewhere in between all the miscarriages, a shaman was called. He deduced that my mother’s spirit had taken flight sometime after my successful birth. A frightened spirit could not hold safe the lives of others, all the babies that came to them in Ban Vinai Refugee Camp after me.

Each time my mother had a miscarriage, I thought she would die. There was always so much blood loss. Her body was limp and without life in the water wagon the adults used to transport her to the camp hospital. Each time she came back to me, I grew more wary of what lurked in the river.

When we left Ban Vinai Refugee Camp in 1987, I was six years old. I quickly forgot about the river. It was not until a decade and a half later, when I was at Columbia University studying to become a writer, when one of my friends met up with an American doctor who had been to Ban Vinai Refugee Camp, that I learned: the river of my youth was nothing more than an open sewage canal. When I told my mother and my sister Dawb about the reality of the river, they both said, “Of course” – they who had been much more intimately connected to that river than I ever was.

Sexism in the workplace: Women scared to speak out in NHS

Afghan Pilots Who Sought Safety in Uzbekistan Transfer to U.S. Base

How TikTokers took down a Texas anti-abortion site