Why are there food shortages in the UK? 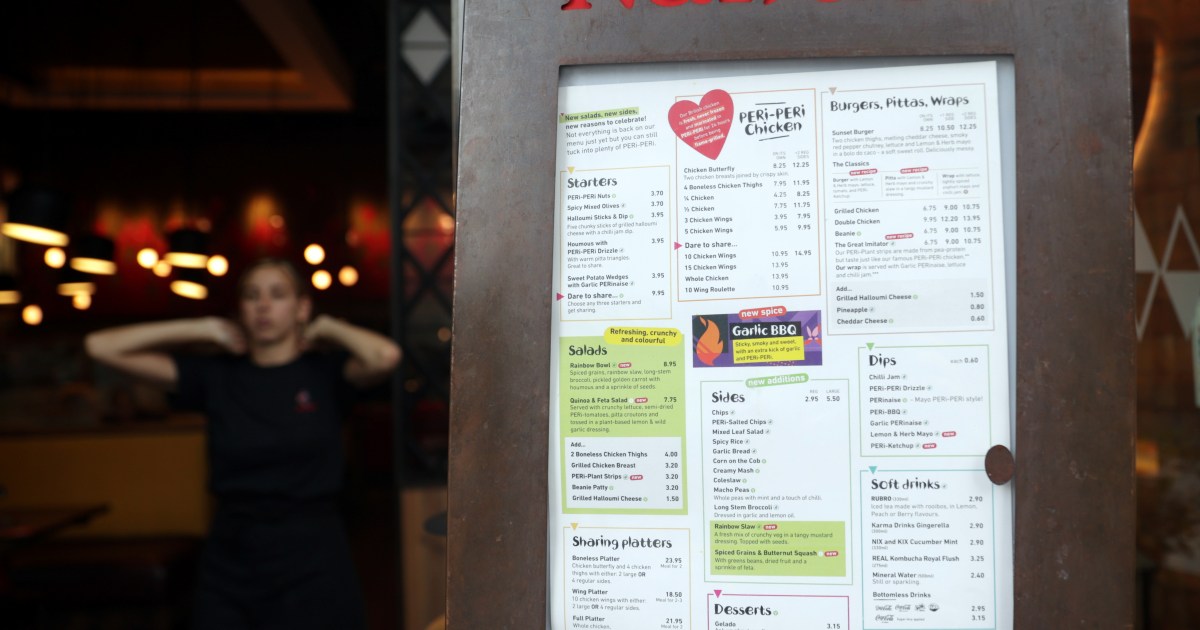 Yet food shortages across the United Kingdom have dominated headlines in recent weeks. Supermarket shelves have been sparse and restaurant menus have been modified.

Nandos, the popular grilled chicken restaurant chain, recently closed some of its units after running out of chicken, and various other big-brand outlets including the Greggs bakery and McDonalds have faced similar supply issues.

Steve Wilson, a disappointed Greggs customer in Brighton, told Al Jazeera: “I have two nearby, but both had menu items missing.”

He had wanted to order a fried chicken baguette on Just Eat, a food delivery app, but found “they only had one type” on offer.

He then called the branch to find out more. “They said it’s due to chicken shortages so had to stop offering certain items.”

In London, Ziad Elhassan visited the Mile End branch of Nandos and was frustrated to discover a scaled-back menu.

“This is the third time with no thighs in a month,” he said. “They have breast and wings but no thighs.”

When he asked for an explanation, he was told supply chain issues were to blame. “Thighs come from a different supplier apparently,” he added.

These shortages are in part due to demographic shifts catalysed by Brexit, Britain’s historic divorce from the European Union.

The British Poultry Council estimates that one in six jobs in the industry is currently vacant as a result of workers returning to the EU.

The Road Haulage Association says there is a current shortfall of about 100,000 heavy goods vehicle (HGV) drivers in the UK.

The labour shortages are also a result of the pandemic. Analysts say there are no food shortages as such, but rather labour supply issues in haulage and logistics caused by a combination of COVID-19 and Brexit.

“We have a UK specific economic shock, Brexit, coming on top of a global one, COVID,” David Henig, head of the Brussels-based European Centre for International Political Economy, told Al Jazeera.

The rise of online shopping, in particular next-day delivery, dependence on which has been exacerbated by the pandemic, means consumers want more deliveries – and faster, but that there are fewer drivers to deliver them.

Meanwhile, analysts say a global shortage of truck drivers has been an underlying issue since the mid-2000s.

In a recent interview with the Financial Times, head of policy at the Road Haulage Association Rod McKenzie, suggested, “The only place that doesn’t have a significant shortage of drivers is Africa.”

But the short-term implications of Brexit on Britain’s labour force are clear.

Independent research carried out on behalf of Logistics UK, a transport association, by RepGraph estimates that 14,000 EU drivers left the UK in the year up to June 2020, with just 600 returning by the second quarter of 2021.

At the same time, there is a backlog of domestic drivers who are waiting to take HGV tests that were pushed back during the pandemic, and the already dwindling pool of drivers is being further reduced by test-and-trace isolation rules.

In short, there are goods but fewer drivers to deliver them.

But driver shortage issues are compounded in the UK, Henig explained.

“They seem particularly acute … because of previous reliance on using EU staff.”

The government has outlined plans to draft in HGV qualified army personnel to fill the gap but industry leaders say this move does not go far enough.

Logistics UK and the British Retail Consortium recently wrote to the government calling for intervention, to allow European drivers back into the UK on short-term visas.

It is still unclear if the government will accept what might be perceived as a short-term political defeat.

Logistics UK anticipates the “crisis” will worsen with demand for goods to rise with the new school year, some businesses returning to offices, and the coming Christmas holiday period.

And analysts expect more disruption when full customs checks on EU goods are phased in.

By January 2022, all documents must be in order, and there are fears that both British border systems and businesses in the EU will not be prepared for the wave of new documentation.

“There may well be a permanent [impact] in terms of reduced supply and higher prices,” Henig said, “but shortages are unlikely to be the norm as long as major supply chains continue to hold.”

In the medium term, how the EU will respond to its supply strains is another question.

If the bloc takes a more protectionist approach, “there is a chance the UK recovers from our double shock better than the EU”, said Henig.

Such a recovery would likely be spun as a Brexit victory for the ruling Conservative government, but it is at least encouraging for British fans of southern fried chicken baguettes and Nandos chicken thighs.

Texas’s Radical Abortion Ban Will Be Devastating For Immigrant Communities

Coronavirus: What’s happening in Canada and around the world Friday

Coronavirus: What's happening in Canada and around the world Friday

UK threatens to send migrant boats back to France

How to watch the 2021 federal leaders’ debate, in English, Inuktitut or Denesuline