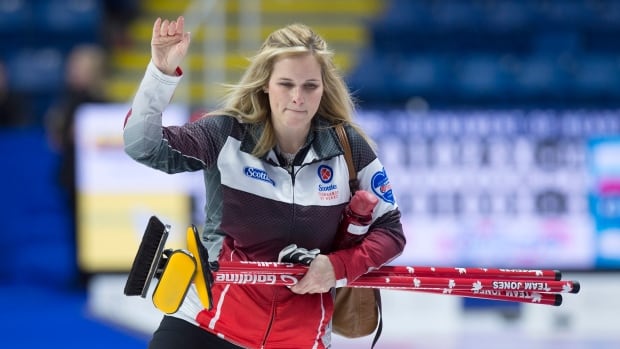 Canada is deeper in women’s curling talent and so is the rest of the world.

But reigning Olympic champion Anna Hasselborg of Sweden, world champion Silvana Tirinzoni of Switzerland and a rush of Asian contenders make wins harder to get both inside and outside of Canada.

“There’s no question it’s harder,” Carey told The Canadian Press. “Europe was always good, but they’re better now than they’ve ever been. Add Asia on top of that and it’s crazy.”

Hasselborg will try to defend her title at the $125,000 Masters in North Bay this week.

“When you look at a Grand Slam, which is your top 15 teams in the world, there’s at least half not Canadian,” Carey said. “We’ve never seen that before. That’s unprecedented.”

But few countries have as many strong women’s teams as Canada. Where once Homan and Jones were considered in a class by themselves, more are contending for titles.

“It’s daunting as a player, but I’m encouraged by it for Canadian curling,” Carey said. “We’re seeing actually quite a bit of depth.”

In her Alberta foursome’s first season together as a team, Carey defeated Homan in the final of the 2019 Canadian women’s championship in Sydney, N.S.

Carey, vice Sarah Wilkes and front end Dana Ferguson and Rachel Brown then missed the playoffs at the world championship in Denmark.

Carey is both grateful that her team has an automatic berth as Team Canada in the 2020 Scotties Tournament of Hearts in Moose Jaw, Sask., and hungry to return to the 2020 world championship in Prince George, B.C.

“Getting back to the Scotties is the big one,” Carey said. “That is a big carrot because you don’t have to go to provincials, especially being in Alberta where provincials is really hard.

“We’re certainly taking what happened last year and building on it and taking maybe some of those things that didn’t happen the way we wanted them to and building on those as well.”

The 35-year-old from Winnipeg moved to Alberta five years ago and won the 2016 Tournament of Hearts for the province with Amy Nixon, Jocelyn Peterman and Laine Peters.

Carey is based in Calgary where she works as the Cochrane Curling Club’s co-ordinator. Her teammates live and work in the Edmonton region.

With qualification criteria now set for the Olympic trials in just over two years, Carey would also welcome an early berth in the 2021 Roar of the Rings in Saskatoon.

Other avenues to one of nine trials berths include winning the 2020 Canada Cup or Tournament of Hearts, being a top-ranked team in Curling Canada’s Canadian Team Ranking System (CTRS) by 2021, or finishing top two in the pre-trials tournament.

“Basically you just want to nail it down sooner rather than later,” Carey said. “The sooner you do that the less stress you’re under for the next couple years because counting points and looking over your shoulder, that’s just exhausting.

“It’s a lot more stressful when you’re the last one to get in than it is if you’ve got it locked up a year or two in advance. Everyone wants a direct berth as soon as they can possibly get it.”