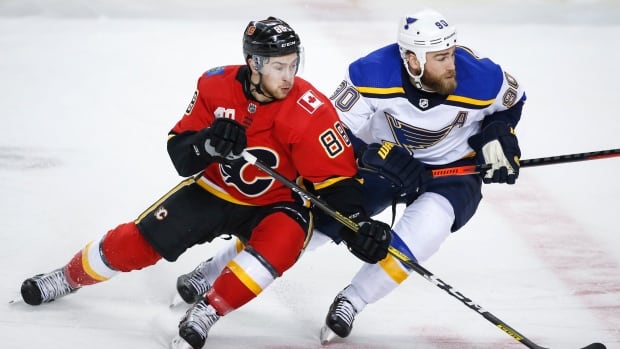 David Perron scored once in regulation and added another in the shootout as the St. Louis Blues ended a five-game road winless skid with a 5-4 victory on Tuesday over the Calgary Flames.

The Blues had yet to win in a shootout this season, entering the night 0-3. The Flames had yet to lose at 5-0, but it was over quickly with Perron and Ryan O’Reilly scoring on St. Louis’ first two shots and Sean Monahan and Matthew Tkachuk both failing to score.

Sean Monahan with a pair, Matthew Tkachuk and Mark Jankowski scored for Calgary (26-19-6). The Flames, 6-2-1 in their last nine, are right back in action on Wednesday night in Edmonton when they renew hostilities with the Oilers.

In a wild back-and-forth game in which both teams blew two leads, St. Louis tied it 4-4 less than a minute into the third period.

After Andrew Mangiapane hit the goal post at one end, the Blues raced up ice on a 2-on-1 with Sanford keeping the puck and ripping a shot over Talbot’s glove.

St. Louis then scored what appeared to be the go-ahead goal less than three minutes later when Talbot muffed Perron’s shot off the wing. However, interim head coach Geoff Ward challenged the play for offside and after video review, the goal was waved off.

For years Kobe Bryant has rubbed shoulders with the hockey elite, Rob Pizzo looks at Bryant’s history with the NHL.  2:18

After taking a 3-2 lead after 20 minutes, thanks to two goals in the final couple minutes of the first period, the Blues’ second lead of the night was erased at 4:40 of the second when Monahan fired home a Johnny Gaudreau pass, making it a perfect 3 for 3 on the power play.

Five minutes later, the Flames surged back in front when Jankowski converted a centring feed from Sam Bennett. It’s the second goal in as many games for Jankowski after he started the season without a goal in the first 38 games.

Calgary had a chance to go up by two, but on his second breakaway of the period, Gaudreau was thwarted once again by Binnington. After a deke to his backhand didn’t work on his first try, this time he tried to shoot high blocker side, but again was denied by the Blues goaltender, who also got a pad on the rebound.

St. Louis opened the scoring at 5:45. Oliver Kylington gave the puck away to Steen, who worked a width-of-the-ice give-and-go with Robert Thomas, with Steen finishing for his fifth goal of the season.

After power-play goals five minutes apart by Tkachuk and Monahan put Calgary in front, Perron tied it at 18:41. Schwartz’s deflection eight seconds into a man-advantage made it 3-2 at 19:25.

Why Gronk sees more of himself in Kittle than Chiefs' Kelce - NBCSports.com