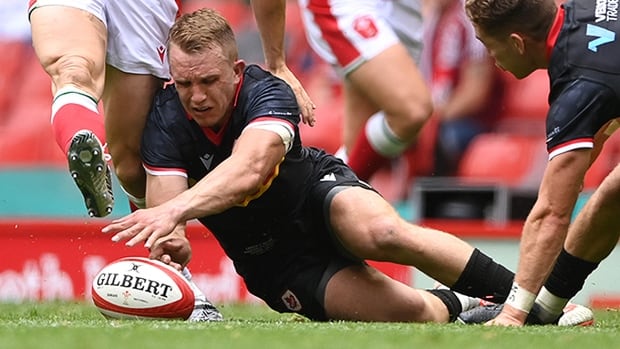 Canada rallied from a 14-10 halftime deficit to defeat the U.S. Eagles 34-21 on Saturday in St. John’s and take a healthy lead after the first leg of their Rugby World Cup qualifying series.

The teams meet again next Saturday in Glendale, Colo.

The aggregate winner moves on to face No. 17 Uruguay in early October to determine who slots into Pool A at France 2023 with No. 2 New Zealand, No. 5 France, No. 14 Italy and Africa 1. The loser will meet No. 28 Chile to determine who progresses to the Americas 2 playoff against the loser of the Americas 1 battle.

The Canadian men have never missed a World Cup, although they had to qualify the hard way last time out — winning a four-team repechage to make the 2019 tournament in Japan. The Americans have only failed to qualify once, in 1995.

Canadian coach Kingsley Jones, while happy with the performance of his 22nd-ranked team isn’t taking anything for granted in the two-legged series against the 16th-ranked Americans

Wing Brock Webster, a product of the Canadian sevens program making his 15s debut, went the length of the pitch for an intercept try in the 68th minute as the home side reeled off 20 straight points. A late U.S. try was called back due to an infraction but Tavite Lopeti, also on his debut, scored a converted try under the posts in the 82nd minute to cut the lead to 34-21.

Jamason Faʻanana-Schultz put the U.S. ahead 14-10 in the 35th minute, crossing the line on a set play from a lineout.

The U.S. lost its most experienced player — and lineout leader — in the first half after when No. 8 Cam Dolan, a veteran of 54 caps, failed a head injury assessment test.

Taking advantage of an American error on the second-half kickoff, Rumball’s converted try gave Canada a 17-14 lead in the 43rd minute.

“The most positive thing is the way we improved through the game and the growth in the players,” said Jones.

Canada began to attack the U.S. lineout and, after Heaton stole a lineout and chipped the ball into U.S. territory, extended its lead after LeSage went over in the 52nd for a 24-14 lead. A Nelson penalty in the 63rd minute, after a U.S. high tackle, made it 27-14.

Canada’s matchday 23 featured 11 Toronto Arrows, including captain Rumball and vice-captain LeSage. There were three Toronto players in the forward pack and three in the backline, not counting wing Kainoa Lloyd who is a former Arrow. Five others were on the bench.

The win will move the Canadians up to No. 21 in the rankings while the Americans will go the other way.

While the Americans were riding a six-match win streak over Canada, they had lost their last six test matches against all opposition dating back to a 20-15 win over the Canadians in September 2019 in Vancouver, a warmup for the World Cup in Japan. That B.C. Place Stadium game marked the last time the Canadian men played on home soil.

A moment of silence was observed before the anthems in memory of Robin Short, the longtime sports editor of the St. John’s Telegram who died last week after a two-year battle with cancer.