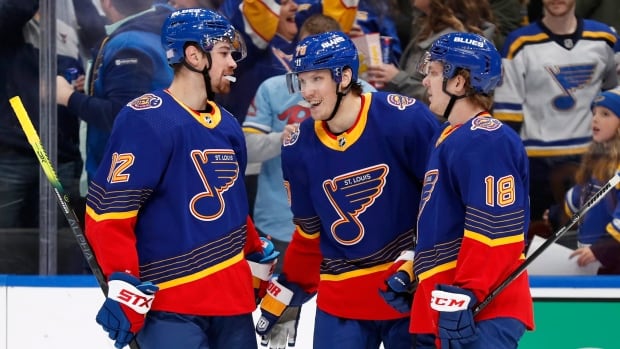 St. Louis defenseman Vince Dunn set the tone for the Blues with a crunching hit that drew a retaliation penalty.

“I think it energized everybody in the whole city of St. Louis,” goalie Jordan Binnington said after stopping 40 shots for his sixth career shutout in St. Louis’ 5-0 win over the Calgary Flames on Thursday night. “It was big.”

Dunn’s open-ice check on Andrew Mangiapane midway through the second period woke the crowd and the Blues. Perron capitalized with a power-play goal to push the lead to 3-0.

Binnington, who helped the Blues to their first Stanley Cup title last season, got his first shutout this season. His biggest save came late in the second when he halted Johnny Gaudreau on a breakaway.

“They threw a lot of pucks to the net and we did a good job weathering the storm,” Binnington said. “We were patient and we stayed composed.”

David Rittich finished with 26 saves for Calgary, which has lost six in a row while being outscored 23-5.

Sanford converted on a one-timer off a pass from Thomas with just under eight minutes left in the first to get the Blues on the scoreboard. He finished with his first career four-point game.

Sundqvist converted on a breakaway midway through the second period for a 2-0 lead. He added his sixth of the season early in the final period. It was his first two-goal game since scoring twice in a 5-3 win over Vegas on Nov. 1, 2018.

Dunn capped the scoring near midway through the third with his fourth of the season. He was just as proud of his hit as he was of his goal.

‘Part of the game’

“It’s just part of the game,” Dunn noted. “If the guy cuts in and gets around me, it’s a breakaway. I’m not trying to hurt anyone.”

Mangiapane did not return to the game.

Calgary has been shut out in their last three road games for the first time in franchise history.

The Flames held a players-only meeting after the contest that lasted roughly 10 minutes.

“Just a lot of honesty between guys,” captain Mark Giordano said. “We all love each other in here. Right now, we have a lot of guys that are trying to be the guy who’s going to change the tide and change the momentum.”