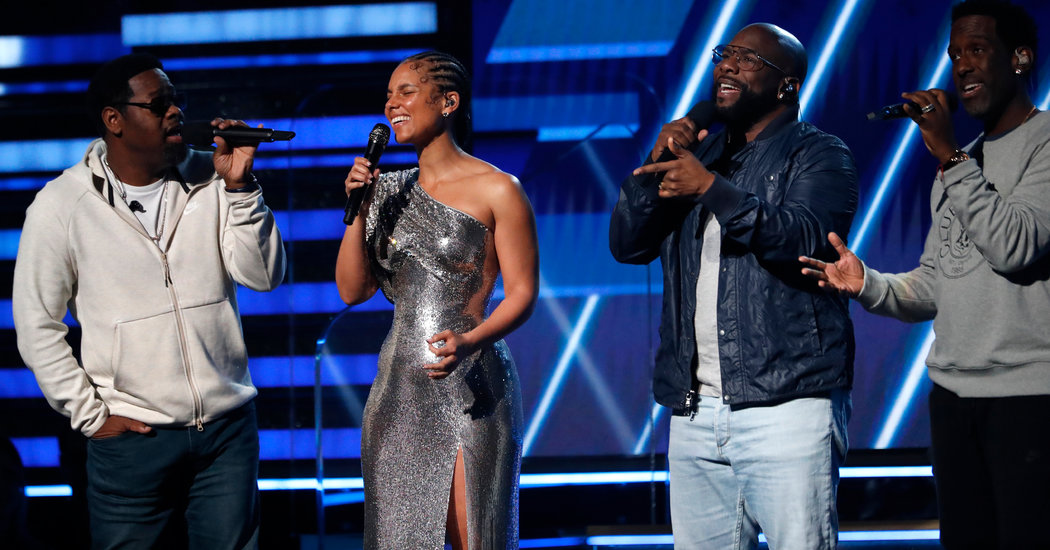 “Tonight is for Kobe,” Lizzo declared at the 62nd annual Grammy Awards, belting out the lyrics to “Cuz I Love You” as the show kicked off.

The “Truth Hurts” singer’s performance gave way to Alicia Keys, who is hosting the show for the second time and took a moment to honor the retired Los Angeles Lakers star Kobe Bryant. He was killed in a helicopter crash earlier in the day with his daughter Gianna and seven others in Calabasas, Calif.

“We’re all feeling crazy sadness right now,” Keys said. “We’re literally standing here, heartbroken in the house that Kobe Bryant built.” The Grammys are held at the Staples Center, where Bryant spent most of his N.B.A. career.

Paying tribute to the victims of the helicopter crash, Keys, who was joined by Boyz II Men, sang the R&B classic “It’s So Hard to Say Goodbye to Yesterday.”

The Recording Academy, which presents the Grammys, said on Twitter: “Remembering Kobe Bryant tonight while we honor music in the house that he built.”

Earlier, outside the Staples Center in Los Angeles, fans dressed in Lakers gear and shades of purple dropped off flowers at a makeshift tribute honoring Bryant.

A moment of silence was held for Bryant during the show’s pre-telecast ceremony, where many of the awards are handed out.

Harvey Mason Jr., the chairman and interim chief of the Recording Academy, called for the gesture “since we are in his house,” The Associated Press reported.

Online, some of the artists set to appear at the Grammys posted tributes to the Lakers star.

“In Staples Arena, where Kobe created so many memories for all of us, preparing to pay tribute to another brilliant man we lost too soon, Nipsey Hussle,” John Legend wrote on Twitter. “Life can be so brutal and senseless sometimes.”

On Instagram, Demi Lovato posted a photo of herself alongside Bryant and said that he was “always so sweet to me.”

“You’re a legend with wings now,” she wrote, adding an update after she heard that one of Bryant’s daughters also died in the crash. “This whole family was so sweet and now they’re in my prayers heavy,” Lovato said. “R.I.P. Gigi beautiful girl.”

Billy Ray Cyrus, who, with Lil Nas X won best pop duo/group performance for “Old Town Road” — which also won best music video — dedicated both of the awards to Bryant and his daughter.

“Sending my thoughts and prayers to his family and friends during this difficult time,” Cyrus said on Twitter.

The producer and D.J. Diplo, speaking to Ryan Seacrest on the red carpet, called the deaths “devastating.”

Leishman Cards 65 to Win at Torrey Pines as Rahm Falters