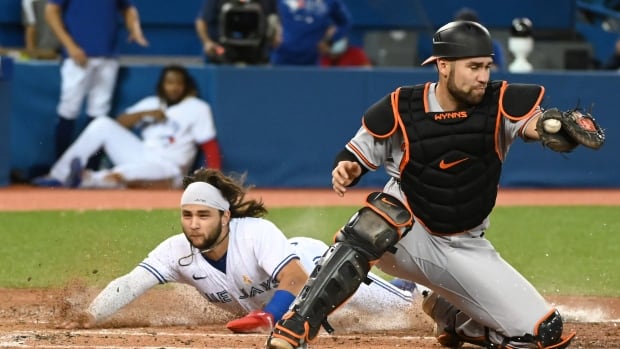 The Blue Jays overcame their recent late-game offensive struggles with an important victory against the lowly Baltimore Orioles on Wednesday in Toronto.

A Randal Grichuk pinch-hit sacrifice fly in the eighth inning was enough to produce a 5-4 win and save the Blue Jays from being red-faced for the second straight outing against the Orioles.

The late-game rally allowed Toronto to keep pace with the Boston Red Sox in the battle for the second wild-card spot in the American League. The Red Sox scored a 3-2 win in Tampa Bay against the Rays to keep the Blue Jays 4.5 games back of Boston.

“Every game matters,” said Toronto second baseman Marcus Semien, who belted his 33rd homer in the first inning to tie his career high, set in 2019 as a member of the Oakland Athletics.

“It doesn’t matter how we get it done.”

The Blue Jays improved to 12-15 in one-run games and 8-12 when tied after seven innings. Toronto led 4-2, only to see the Orioles peck away with runs in the sixth and seventh innings to tie the game.

Bichette led off the eighth inning with a fluky infield hit that got by Orioles reliever Dillon Tate (0-5). Teoscar Hernandez then was hit by a pitch and both runners moved up a base on Alejandro Kirk’s long fly ball to centre.

Toronto stopper Jordan Romano managed a stress-free 1-2-3 ninth inning for his 15th save. He hasn’t allowed a run in his last 11 appearances. Tim Mayza (5-2) recorded the win.

‘Just had to find a way’

Blue Jays starter Steven Matz suffered some control issues with his fastball in the second inning. After Ramon Urias and Anthony Santander each singled, Matz walked Jahmal Jones and then, with the bases loaded, issued consecutive free passes to Cedric Mullins and rookie Ryan Mountcastle.

“I just had to find a way today,” Matz said.

Matz threw 65 pitches through three innings but hung in there to complete five innings with 100 pitches. He gave up two runs on five hits, striking out five and walking four.

“It was one of those grinding days. It definitely came back a little bit, but I didn’t feel as crisp as I have been,” said Matz, who was seeking his career-tying 11th win of the season.

“He found a way,” Blue Jays manager Charlie Montoyo said. “To me, he’s the player of the game. He wasn’t missing by much.”

The Blue Jays provided Matz with a 4-2 lead with a three-run fourth inning, ending the evening for Baltimore starter Matt Harvey. Hernandez singled in Bichette. Corey Dickerson moved Hernandez to third with a single to right and then stole second. Both outfielders scored after Lourdes Gurriel Jr.’s double to left.

Springer gets pulled, roster moves made

George Springer was back in the Blue Jays lineup as a designated hitter in his customary lead-off spot. He returned on Monday after a two-week layoff because of a sprained left knee. But he was pulled in the seventh inning as a precautionary measure after he awkwardly rounded second base on Tuesday.

A one-out line-drive single from Springer kept a seventh-inning rally alive for Toronto. But with Gurriel on third and Springer on first, Orioles reliever Jorge Lopez struck out Semien and coaxed Vladimir Guerrero Jr. into a fly ball-out to right.

With rosters expanding from 26 to 28 on Sept. 1, the Blue Jays promoted right-handed pitchers Nate Pearson and Bryan Baker from Triple-A Buffalo on Wednesday.

Pearson, 25, is one of the top prospects in the Toronto system. But he has dealt with nagging groin issues all season.

His last outing for the Blue Jays was as a starter on May 9 in Houston.