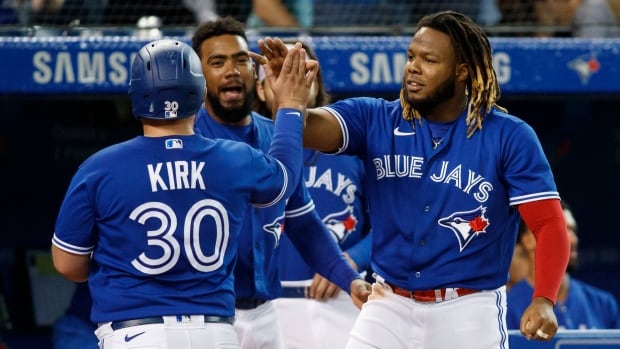 Fresh from delivering a weekend beatdown in Baltimore, the surging Toronto Blue Jays picked up where they left off Monday against Tampa Bay.

Starter Alek Manoah was brilliant over eight shutout innings and Toronto’s offence continued its torrid pace in an 8-1 rout of the Rays at Rogers Centre. Vladimir Guerrero Jr., hit his major league-leading 45th home run and Teoscar Hernandez had a career-high five hits as the Blue Jays dominated the opener of the three-game series.

“They created momentum early and we just had no answers,” said Rays outfielder Kevin Kiermaier. “It was a good old-fashioned butt whuppin’ to be honest.”

Toronto scored four runs in the fourth and tacked on three more in the fifth inning. The Blue Jays extended their winning streak to four games — scoring a whopping 52 runs along the way — and have won 12 of their last 13 games overall.

Manoah had the Rays handcuffed all evening, retiring the first 14 batters he faced before a giving up a single to Joey Wendle in the fifth inning. The rookie right-hander had 10 strikeouts, hit a batter and didn’t issue a walk.

“It felt amazing man, just going out there and competing,” Manoah said. “It’s a lot easier to pitch when you’ve got an 8-0 lead.”

In the sixth, Guerrero belted a 3-1 pitch just inside the left-field foul pole to move ahead of Angels slugger Shohei Ohtani in the home run race.

The line drive came off a 97-m.p.h. fastball from Adam Conley and had a game-high exit velocity of 113.9 m.p.h. The ball’s launch angle was just 15 degrees, tied for the lowest on a fence-clearing homer this season.

“I keep using the same line: ‘I don’t believe what I just saw,”‘ said Blue Jays manager Charlie Montoyo, who thought the ball would hit the wall since he saw an infielder jump for it.

Toronto (81-63) moved a season-high 18 games above the .500 mark. Tampa Bay (89-55) has dropped four of its last five but the first-place Rays still have a comfortable eight-game lead on Toronto in the AL East divisional race.

The Blue Jays moved a half-game up on Boston in the race for the first wild-card spot. The Red Sox were scheduled to play later Monday night at Seattle.

Toronto was one game ahead of the New York Yankees, who needed 10 innings to beat the Minnesota Twins 6-5 earlier in the day.

Tampa Bay starter Collin McHugh pitched into the third inning as the Rays’ opener. He was replaced by Ryan Yarbrough (8-5), who gave up three straight one-out singles before Grichuk’s RBI double made it 2-0. Valera followed with a two-run single.

In the fifth, Bichette turned on a 2-2 pitch for his 24th homer. Hernandez doubled and scored on a single by Gurriel, who came across on a Valera single and the rout was on.

One of the few Tampa Bay highlights came in the seventh when Kiermaier made a highlight-reel catch against the wall to deny Gurriel an extra-base hit.

Kevin Kiermaier got UP! 😱 <a href=”https://t.co/2jhnVAiIrq”>pic.twitter.com/2jhnVAiIrq</a>

Announced attendance was 12,119 and the game took two hours 53 minutes to play.

Right-handers will face off Tuesday with Toronto sending Jose Berrios (11-7, 3.52 ERA) to the mound against Drew Rasmussen (2-1, 3.25). The three-game series will wrap Wednesday with a matinee. Softball pitcher Jenna Caira threw out the ceremonial first pitch. She helped the Canadian softball team win bronze at the Tokyo Olympics.

At Euro 2020, a Reminder That Good Can Be Great