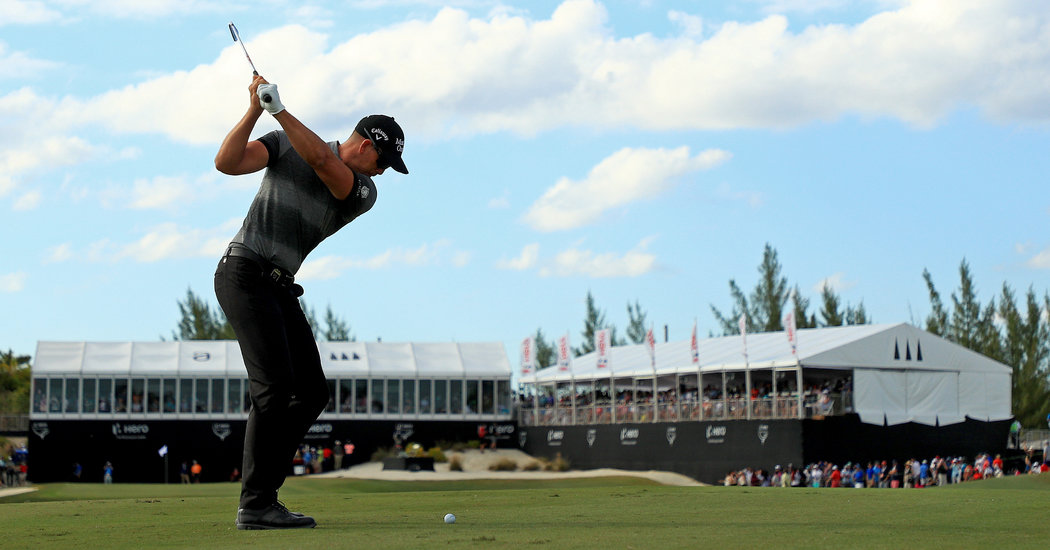 NASSAU, the Bahamas — Winless in more than two years, Henrik Stenson found himself in the middle of a wild chase to the finish on Saturday, with Tiger Woods and the elite in golf all around him.

Five players had a chance to win in the final hour. Four had at least a share of the lead at one point.

One swing changed everything.

“The shot of the day,” Stenson said.

He drilled a 5-wood from 259 yards away to within inches of the par-5 15th hole for a tap-in eagle, going from a 1-shot deficit to a 1-shot lead. Three pars gave him a 6-under 66 and a victory at the Hero World Challenge that he might not have seen coming.

Stenson tied for 44th two weeks ago in Dubai and spent a few hours on the range that afternoon with Pete Cowen, his swing coach. He carried some of that to the Bahamas, and his nerves held up at the Albany Golf Club.

“Sometimes, just keep on working hard and grinding it out,” Stenson said. “Confidence can still be a little higher, but I’m really happy with the way I hung in there.”

Woods fell out with a chip that did not make it up the slope on the 14th hole, and he had to scramble for bogey. Justin Thomas had a pair of 12-foot birdie putts burn the edge. The defending champion, Jon Rahm, appeared to seize control with a birdie-eagle-birdie stretch to take the lead on the 16th hole.

And then Stenson struck the decisive blow with his 5-wood. He knew it was good. He could not see beyond a dune as it bounced onto the green, tracked toward the hole and settled about eight inches away to set up an eagle.

That took him from one shot behind to one shot ahead, and he closed with three pars.

Rahm had to settle for two pars to close out his 66.

Stenson stopped a drought dating to the Wyndham Championship in August 2017, his last previous win. His world ranking plunged from No. 6 to No. 40.

“It’s down, but it’s not a disaster,” Stenson said of his ranking. “I can compete with the best, and I guess I showed that.”

Patrick Reed, under scrutiny for improving his line of play in a waste area on Friday that led to a 2-shot penalty, shook that off for a 66 to finish alone in third.

Woods has not won his holiday event since 2011, but he put himself in position with timely birdies while playing alongside Thomas. It looked like quite a battle with Woods setting the pace early, and Thomas catching and passing him with an 8-foot eagle putt on the 11th hole.

But that was as good as it got for both of them.

Woods tried to drive the par-4 14th hole and wound up in the waste area with a bad lie. His fourth shot barely made it onto the green before he holed a 15-foot putt to escape with bogey.

He spent more time in the waste area on the par-5 15th and had to scramble for par, ending his chance. Woods closed with a 69.

The only victory — a hollow one — was finishing with a lower score than Thomas for the first time in some 15 pairings together. Even that required a double bogey by Thomas on the last hole, giving him a 70.

“I don’t think that’s how we wanted it to end up,” Woods said with a laugh. “If I was going to get him, it would have been nice for either of us to have a chance to win the tournament.”

The World Challenge was just the first stop for 11 of the Americans in the field.

They had a few hours to get changed for a flight to Australia for the Presidents Cup, which starts Thursday with Woods as the first playing captain in 25 years.

Drellich: Even without granting immunity, MLB would have had trouble punishing Astros players – The Athletic

Drellich: Even without granting immunity, MLB would have had trouble punishing Astros players – The Athletic