Here’s a Terrifying Thought for the N.B.A.: Giannis Looks Better 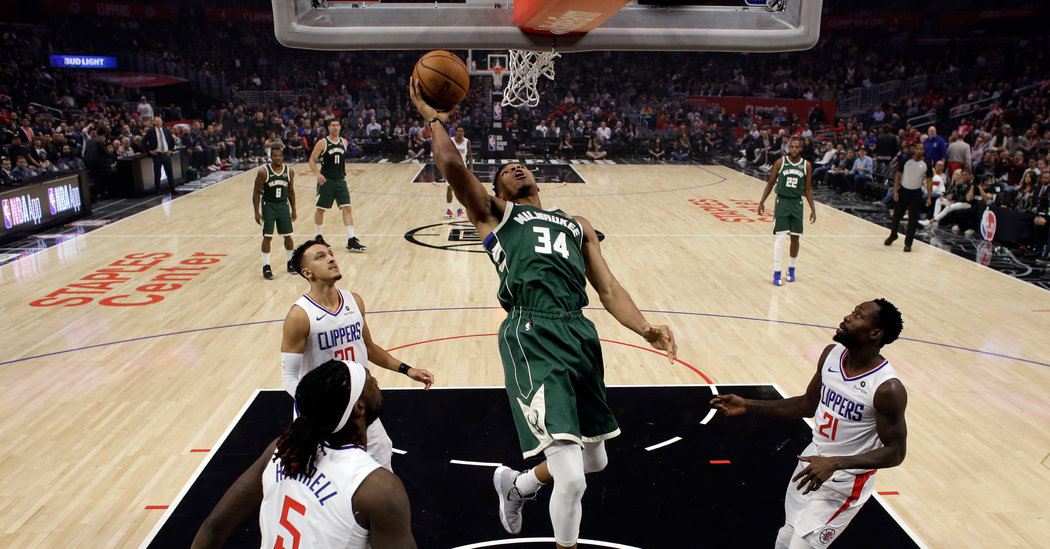 LOS ANGELES — The Clippers have occupied a nice slice of the N.B.A. spotlight this season. They have two new stars and championship hopes. Their marketing department has spent considerable time and energy trolling the Lakers. It is big news when Kawhi Leonard plays and even bigger news when he does not, and that is when you know you have some serious cachet as an organization.

Leonard rested on Wednesday night as a part of his personalized “load management” program, so was a spectator for the Clippers’ game against the Milwaukee Bucks, who are a little easy to overlook these days. While so many other teams, including the Clippers, underwent flashy renovations this summer, the Bucks merely tinkered with their roster as they kept their core intact.

Giannis Antetokounmpo, of course, remains the central figure in everything they do, and he offered a reminder of his greatness — in case anyone actually needed one — by collecting 38 points, 16 rebounds and 9 assists in Milwaukee’s 129-124 win.

None of this is meant to suggest that the Bucks did not change over the off-season, because they did change — starting with Antetokounmpo, who may be better than ever, a terrifying prospect for the rest of the league after he won the N.B.A.’s Most Valuable Player Award last season. Most apparent is his refined passing and playmaking, which could be taken as a sign of greater trust in his supporting cast, with roots in the bitter way that last season ended for the Bucks.

Antetokounmpo has been fueled by the memory of Milwaukee’s loss to the Toronto Raptors in the Eastern Conference finals. Pat Connaughton, a teammate, said Antetokounmpo had come away from that experience with a sharper understanding of what it takes to win at the highest level.

“It’s about the mental side, about learning how teams are guarding him,” Connaughton said. “It’s about seeing what Toronto did against us in the playoffs, and what got us stuck and disrupted us and kept us from achieving our goal. I think he’s taking that all into account, where he’s even more of a student of the game. He’s seeing: ‘Hey, there are opportunities for me to get my teammates involved. And when I do that, it will create even more opportunities for me to do what I do best.’”

Antetokounmpo did a lot of his best against the Clippers, who were short-handed without Leonard and Paul George, who is nearing his debut for the team after undergoing off-season shoulder surgery. The Clippers have no plans to play Leonard, their most precious asset, in back-to-back games anytime soon.

Leonard’s absence was a bummer for pretty much everyone at Staples Center, including the Bucks, who could wind up facing the Clippers in June.

“Every organization has their own way to operate,” Antetokounmpo said. “Obviously, I was excited to play against one of the best players in the league. That gets you hyped up, gets the best out of you.” He added, “But yeah, I’m excited to see him in the future.”

Milwaukee is only eight games into its season, but Antetokounmpo is averaging 29 points, 14.3 rebounds and 7.6 assists while shooting 59.2 percent from the field, all of which are career bests. If there is a hole in his game, it is his 3-point shooting. Then again, he was 4 of 7 from 3-point range against the Clippers. The Bucks lead the league in scoring.

When Bucks Coach Mike Budenholzer was new to the team last season, what surprised him most about Antetokounmpo was his vision and his ability to create for teammates.

“Obviously, he’s now taking it to another level,” said Budenholzer, whose team has benefited from the additions of Kyle Korver and Wesley Matthews. “Hopefully, we’ve got more shooting around him and better spacing. He’s growing as a passer, and we’re growing an understanding of when and where people need to be around him.”

Antetokounmpo does not think he has come close to hitting his ceiling, which is terrific news for the Bucks, who have him under contract through next season. But he is also a workaholic, which can cause its own set of challenges. The team has cautioned him that he does not need basketball all the time.

“One of the important things as you grow in this league, especially for a guy of his stature, is understanding the quality of work versus the quantity of work,” Connaughton said. “And that’s not to say the quality isn’t there. But I think as he’s developed, he’s done a good job of balancing the desire he has to always be on the floor with the maturity to know that he has a 15-to-20-year career ahead of him. That’s a lot of time, and body maintenance is as important as the work he’s putting in.”

During games, Budenholzer monitors Antetokounmpo’s minutes. At practice, the Bucks try to be as efficient as possible while minimizing excess contact. They also have “body days,” which are dedicated to physical upkeep: weight lifting, cold tubs, therapy, massages. The court is off-limits, no exceptions.

“Putting the ball down for a day,” Budenholzer said, adding, “We’re very conscientious about how we keep him healthy and keep him playing well.”

The Bucks want to exercise preventive care with all their players, but especially with Antetokounmpo, because he needs guardrails. Even when he was playing for Greece’s national team over the summer, he still found “windows of time” to chip away at his game by doing individual work, Budenholzer said.

Now, in his seventh season, Antetokounmpo is leaning on his teammates more than ever, by passing the ball and sharing the load. He seems to be managing just fine.