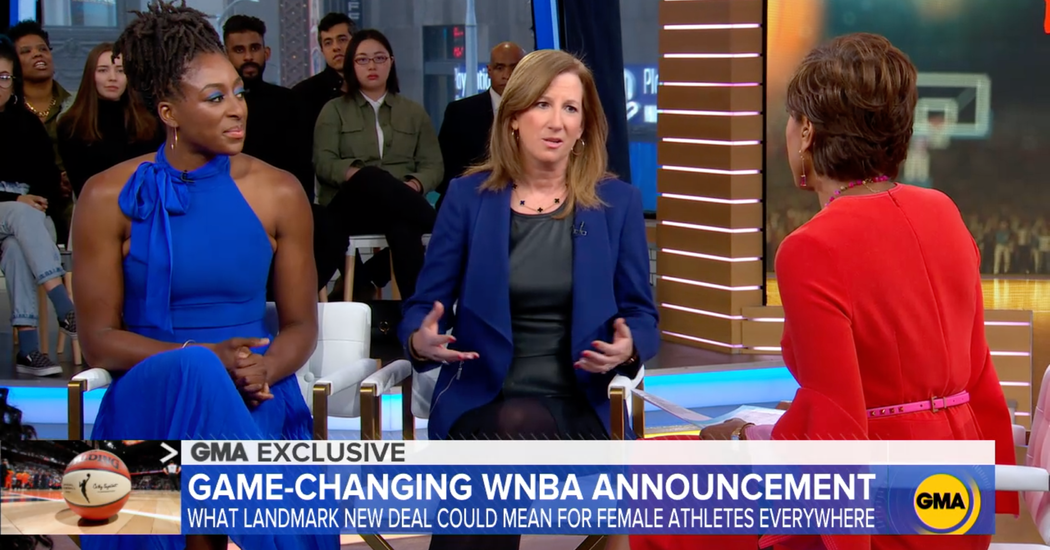 Months before Cathy Engelbert had been hired as the commissioner of the W.N.B.A. — and even longer before she had settled a landmark collective bargaining agreement with its athletes on Jan. 14 — she met with Terri Jackson, executive director of the players’ union.

After Lisa Borders had stepped down as the league’s president in October 2018, Jackson had reached out immediately to Mark Tatum, the league’s interim president, with an unconventional request.

“The person who will fill this position next is very important to us, and we’d like to be a part of the process,” Jackson recalled telling Tatum. “I don’t know if that’s ever been done before.”

Tatum responded to Jackson’s email right away and agreed to the request, with both sides planning for that involvement to come in the later stages of the search. Accordingly, Engelbert came to Jackson’s office when she had been shortlisted for the commissioner’s spot but had not yet decided to take the job.

But as the two women talked, it became clear to them that the upcoming collective bargaining agreement would offer opportunities to move the league forward in a dramatic way — and that they each saw the path to doing so in very similar terms.

“Terri’s got these three big categories of asks: compensation; health and wellness; and travel,” Engelbert said. “And so it was from that moment on I said, ‘Wow, this could be a really big, big women’s empowerment platform for these professional athletes.’ Which again, having a link to basketball from my past, it’s really hooked me in.”

The two power brokers have been connected to basketball for a long time. Engelbert, the daughter of an N.B.A. draft pick, played for Muffet McGraw at Lehigh. She was hired as commissioner in May and officially took over in July. Jackson, who had worked at the N.C.A.A., is married to the former N.B.A. player Jaren Jackson, and is the mother of the second-year Memphis Grizzlies forward Jaren Jackson Jr.

Engelbert had worked firsthand on some of the areas of concern, such as child care, during her time at Deloitte. And Jackson, well, she’d seen it firsthand in the N.B.A. — even the varied experience of her undrafted, journeyman player of a husband, along with the lottery pick experience of her son.

“I could remember, 17, 18 years ago when our son was 2, 3 years old and my husband is playing,” Jackson said. “And I could go to a game and my toddler is not forced to sit in the seats with me because there are provisions for child care during the game, and I just kept thinking about that. These are the important steps that were in place for me, as the spouse of an N.B.A. player, and we have a league of women and we haven’t thought about that?”

Jackson and Engelbert said that their experiences as women informed the contract discussions and led to additional benefits related to child care, maternity leave and even things like guaranteed two-bedroom apartments for mothers in the league.

Before all that happened, however, Engelbert realized that she had a lot of work to do to build trust, not just with Jackson but also with the union’s executive committee and the larger membership. That hit home as she entered the room for the first time as commissioner to talk with the executive committee at All-Star Weekend in late July.

Across from her sat some of the biggest figures in the sport: Diana Taurasi, Sue Bird, Elena Delle Donne, Nneka Ogwumike. The two sides had just a few months to work out an agreement, as the players had opted out of a deal that began in 2014, triggering an end-of-season deadline. And Engelbert hadn’t spent time with any of them, save for a brief encounter with Delle Donne.

Ogwumike, the president of the players’ union, also came out of the meeting with an eye toward change: “With the addition of Cathy, it was quite wonderful for us to be able to talk to her about this, because she played such a big role in her last job when it comes to the benefits for women as far as child-planning goes.”

Engelbert took to the road, meeting with owners and players from each of the W.N.B.A.’s 12 teams. She had gotten the lay of the land from Tatum and N.B.A. Commissioner Adam Silver, but even so, she wanted to see for herself.

By September, Engelbert understood from ownership that she would be able to offer the kind of investment required to induce the players to give up many of their overseas playing options and prioritize the W.N.B.A. Engelbert said that took little on her part, as owners expressed frustration to her over the status quo before she even took the job. The new agreement provides higher salaries and family-planning benefits that make staying stateside easier for players.

“In the scale of weighing the pros and cons of going overseas versus having family time at home resting, etc., all the things you can throw into there, it makes it a little bit more palatable,” said Sun guard Layshia Clarendon, who said she had talked about the benefits with her wife, Jessica Clarendon. “It makes it better. It makes it worth it to stay home. I think even more people will. People are looking for opportunities to stay.”

Engelbert said that after the Las Vegas meeting, she also wanted to show players, even before the new agreement was in place, that while her words sounded encouraging, this was a different era for leadership in the W.N.B.A.

The Las Vegas Aces and Los Angeles Sparks had reached the W.N.B.A. semifinals after several hard-fought playoff games. Both lower seeds, they would have had to fly quickly, west to east, to start their semifinal series — to Washington for the Aces, and Connecticut for the Sparks. Engelbert, no stranger to cross-country flights as a million-miler on United, texted Jackson and said she wanted the league to provide chartered planes for the teams this time instead of having them fly commercial as usual.

“I will never forget when I called Terri,” Engelbert said. “And I do think that was a point where hopefully she realized, and certainly others outside the walls of the W.N.B.A. said, ‘Oh, O.K., they’re really thinking about player health and safety.’”

In a league where that had been an open question among the players, trust mattered. The common ground helped alleviate some jitters on both sides.

“I think the players did an amazing job understanding that, to get somewhere where that we want to go, we have to try things that are different,” Ogwumike said.

She added that it was also the job of the executive committee to “ensure though that we weren’t still taking money out of people’s pockets while trying to do that.”

Neither the league nor the union expected to complete the negotiations by the end of the 2019 season, but Engelbert remembered feeling disappointed when the deadline had to be pushed back to Jan. 15. As she flew back to New York on New Year’s Eve from her annual family trip to Florida, she kept reminding herself that the lawyers had assured her all of this was a normal part of the process.

Less than two weeks later, the two sides had a deal in principle. What began with a conversation between Jackson and Engelbert also ended with one.

“Terri called me at 2:18 a.m. in the morning the other night ’cause we were finalizing things,” Engelbert recalled. She had worked on many deals at Deloitte and “burned a lot of midnight oil.” But this was different, she told Jackson.

“Never before have I had the other side call me up in the middle of the night,” Englebert said.

A few days later, this time on “Good Morning America,” Engelbert, Jackson and Ogwumike were ready to announce their deal to the world.