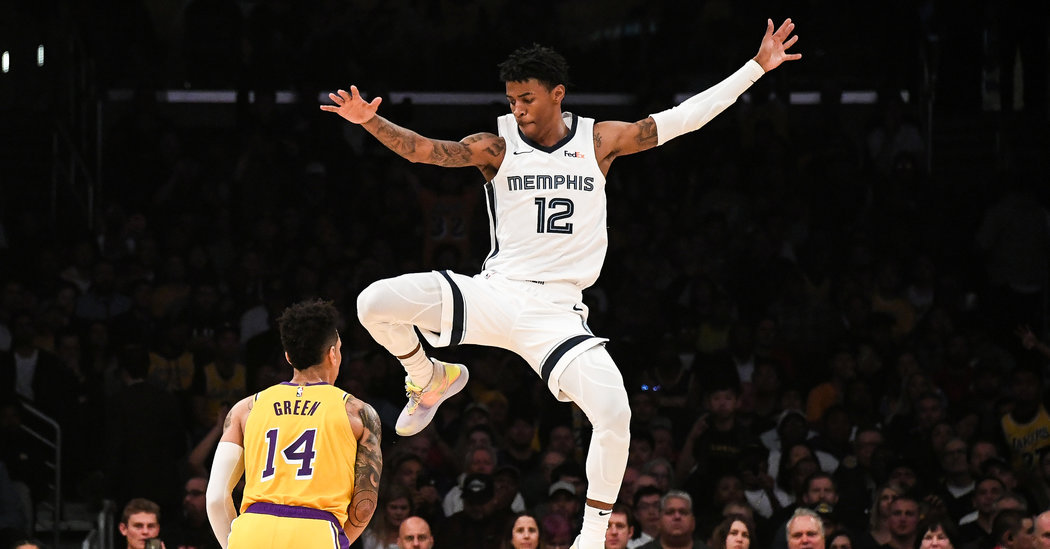 LOS ANGELES — Ja Morant grabbed a seat in the gymnasium bleachers at a Los Angeles-area high school following practice with the Memphis Grizzlies on Monday afternoon. It was a rare moment when he was not in motion. A rookie point guard, he tends to play with the smooth, relentless rhythm of ocean surf.

Morant just keeps coming — at defenders, at the basket, at the lofty standards he sets for himself — and he has already done a good deal to validate the Grizzlies’ selection of him with the No. 2 pick in the N.B.A. draft. Entering Saturday’s game against the Phoenix Suns, he averaged 17.5 points and 5 assists while shooting 50 percent from the field and 42.9 percent from 3-point range.

But as fast as he plays, and as seamlessly as he has made the transition from Murray State to the N.B.A., Morant is still absorbing some of the most fundamental lessons about life in the league. Near the top of that list: The schedule seldom slows. Game after game. Road trip after road trip. Tough assignment after tough assignment.

“Just how quickly you need to turn the page,” Morant said. “You can’t worry about the last game so much, because you’re always moving on to the next one.”

After years of gritting and grinding behind two players who became synonymous with the city of Memphis — Mike Conley (now with Utah) and Marc Gasol (now with Toronto) — the Grizzlies are recalibrating for the long haul behind a new tandem featuring Morant, 20, and a second-year forward, Jaren Jackson Jr.

There will, of course, be growing pains along with tantalizing glimpses of the future. Consider the wild three-day stretch that Morant and his teammates had at the start of the week.

It began Sunday with an overtime home win against the Nets. Morant blocked a jump shot by Kyrie Irving at the end of regulation, then shoveled a pass to Jae Crowder for the game-winning 3-pointer in overtime. Morant finished with 30 points and 9 assists while shooting 13 of 22 from the field.

On Monday, the Grizzlies flew across the country to Los Angeles, then went straight from the airport to a nearby high school so they could practice for about an hour. Afterward, Morant took a few minutes to reflect on his work against the Nets. For years, he has graded each of his games. Against the Nets, he gave himself a seven out of 10. He was upset about his six turnovers, he said, and he felt he had forced a few shots.

“I didn’t like that part of my game,” he said. “I did feel like I competed well.”

By Tuesday, though, Morant had moved on — in part because he had no choice. Against the Lakers at Staples Center, he spent much of the evening in the suffocating presence of Avery Bradley, a 10-year veteran and one of the best perimeter defenders in the league. The larger problem for the Grizzlies was Anthony Davis, who had 40 points and 20 rebounds in three quarters for the Lakers in a lopsided win that dropped Memphis to 1-3. Morant had 16 points and 2 assists in 25 minutes. He was asked what he had learned from the experience.

It is all about learning experiences now for Morant, who has gone from relative obscurity as a lightly recruited high school prospect to renown as one of the brighter young stars of the N.B.A. in less than three years. Perhaps the most remarkable part of his journey is that he does not seem rattled by any of it — at all.

“It’s my job now to play against the best, so I know I’m going to see the best,” Morant said. “Obviously, you grow up watching them and now you’re playing against them, and it’s kind of like a ‘wow’ moment. But I’ve still got to take care of business.”

In his two seasons at Murray State, Morant was a phenom. Matt McMahon, his college coach, described him in a telephone interview as a “basketball genius.” As a sophomore, Morant averaged 24.5 points and 10 assists as the Racers went 28-5. The team’s nickname was fitting: The Racers ranked 14th in the country in scoring offense.

As Morant’s star rose, the university’s athletic department took the unusual step of hiring security personnel to accompany the team on the road, once it became apparent that overzealous fans were camping out in hotel lobbies. Amid the attention, McMahon said, Morant kept striving to improve. McMahon sensed that Morant’s habit of grading himself was a tangible way for him to hold himself accountable and to remind himself that there was always room to grow.

McMahon recalled early-season games when Morant was particularly hard on himself for committing too many turnovers.

“Granted,” McMahon said, “we had the ball in his hands 40 minutes a game.”

Yet Morant never gave himself a grade of better than a seven, even after he eviscerated Marquette in the first round of the N.C.A.A. tournament with 17 points, 16 assists and 11 rebounds.

In Memphis, Morant has settled into a city that has the same small-town feel of Dalzell, S.C., where he grew up. But if he needed any help acclimating to his new environs, his parents were willing to assist: They moved to Memphis, too.

“I brought them with me,” Morant said.

Ahead of the draft, Morant had knee surgery that kept him off the court for nearly three months. But he has been operating at full speed since September, and Grizzlies Coach Taylor Jenkins has made it clear that he wants his team to follow Morant’s speedy lead. Through games played Thursday, the Grizzlies led the league in overall pace.

“That’s where we’re ultimately going to be at our best,” Jenkins said.

A couple of weeks ago, before the start of the season, Jenkins asked Morant if there were certain players he was excited to go up against. After all, he was about to see his share of high-profile point guards. But Morant did not name any names. Instead, he made it sound as if he were entering graduate school.

“He goes, ‘Every single night I play, I’m going to learn something from someone else that I can apply to my game — something that helps me play better the next time,’” Jenkins recalled. “He’s just focused on the basketball element of his job, which is really encouraging.”

So was Morant’s performance against the Nets. McMahon watched the game at home with his wife and their three young children, who have yet to grasp that an N.B.A. season is long and that they may need to pace themselves.

“They were celebrating like it was the N.C.A.A. tournament,” McMahon said.

That was in Morant’s past. He has to keep on moving.