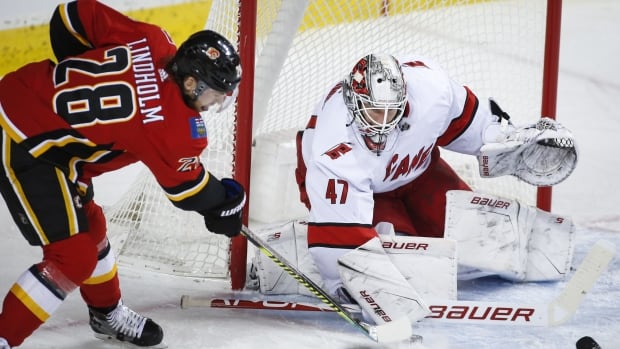 James Reimer made 32 stops and Warren Foegele scored twice as the Carolina Hurricanes ended Calgary’s seven-game winning streak with a 4-0 win over the Flames on Saturday.

It’s the second shutout of the season for Reimer, who has won five of his last six starts and improved to 7-5-0 on the season.

The 31-year-old was at his best in the first and third periods. He kept the game scoreless in the opening 20 minutes, despite Calgary holding a 12-4 edge in shots. When the Flames pressed in the third period, fuelled by four power plays in the final 11 minutes, he once again stood tall.

Brock McGinn and Dougie Hamilton also scored for Carolina (20-11-2), which has points in five straight (4-0-1). The Hurricanes five-game road trip will continue Tuesday in Winnipeg.

Calgary (18-13-4) lost for the first time since Geoff Ward took over from Bill Peters behind the bench. The 57-year-old had won his first six games after officially being named interim head coach on Nov. 29, matching Mario Tremblay (1995-96 Montreal Canadiens) for the longest win-streak by a coach after taking over mid-season.