Knicks Search for the Right Lineup. But Is There One? 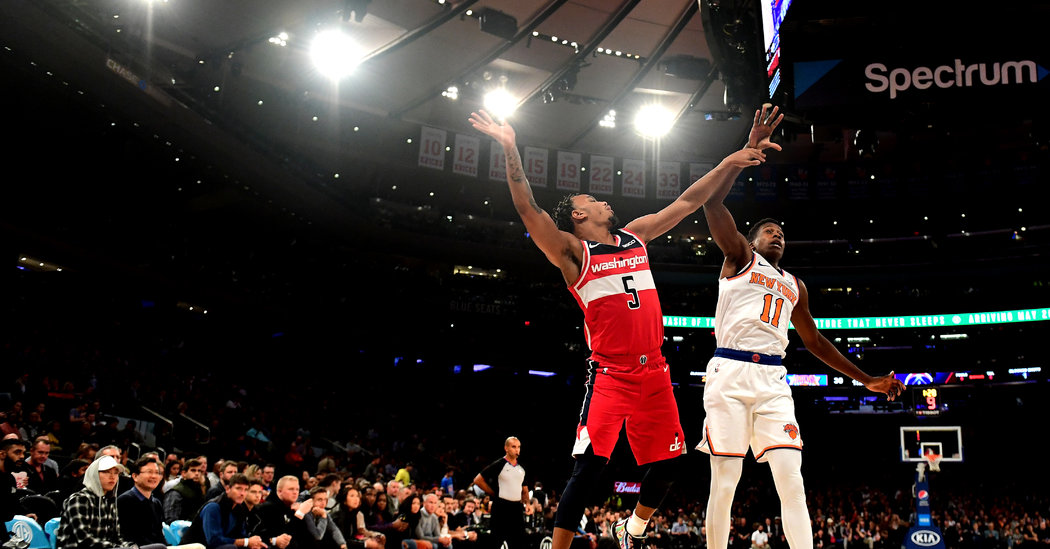 Of the five point guards selected among the first nine picks of the 2017 N.B.A. draft, two are on the current Knicks team coached by David Fizdale. Unfortunately for him, neither is named De’Aaron Fox.

Excellence at the position is widely thought to be essential in the contemporary high-octane pro game, though exceptions to the rule exist, primarily in locales with an all-purpose, positionless, franchise-level talent. Think LeBron James and Kawhi Leonard with the Lakers and the Clippers in Los Angeles, and Luka Doncic with Dallas.

Leave it to the Knicks to have wound up with two third-year point guards who have already convinced many league observers that neither has the skills or the mind-set to permanently lead a quality team. The positional quandary is a microcosm of the roster mishmash created over time by a series of unfortunate — and not atypical — organizational events.

Frank Ntilikina, the French import, is defensively adroit, a contributor of intangibles the box score does not record, but, with the ball, selfless to the point of squeamish. Dennis Smith Jr. is an athletic marvel sorely lacking in conventional playmaking qualities, and with a suspect jumper to boot.

Merge them and you might have a player bearing some resemblance to Fox, whose speed dribble and southpaw savvy were dominant as his Sacramento Kings crushed the Knicks on Sunday night at Madison Square Garden, 113-92. The blowout dropped the Knicks to 1-6 for a young season that began with promises of 1990s-era combativeness and — after years of unsightly play — restorative competitiveness.

In the aforementioned 2017 point guard class, Fox was picked after Markelle Fultz and Lonzo Ball and before Ntilikina and Smith, but he is the only one considered to be a rising star with his original team. Three (Fultz, Ball and Smith) have been traded and critically downgraded. Ntilikina — while starting the Knicks’ last two games because Smith has been on bereavement leave and Elfrid Payton is injured — has watched everyone but Walt Frazier trotted out ahead of him the past two years.

Fox, conversely, was handed the ball in Sacramento a handful of games into his rookie season, during which he averaged 11.6 points and 4.4 assists while shooting 41 percent (30 percent on 3-pointers) on a 27-win team. He made mistakes, played through them, and all the numbers rose significantly for the 39-43 Kings of 2018-19.

“I think that it lets you build your confidence — that you can make a mistake and it’s fine, it’s what’s the next play going to be,” Fox said after torching the Knicks for 24 points and six assists.

Ntilikina was no match for him after two early fouls, especially within a switching Knicks defense with poor rotations. Fox was a late scratch from the United States team that was beaten by France in the quarterfinals of the recent FIBA World Cup, but, like many others, took notice of Ntilikina’s stout defense on Kemba Walker and the big shots he drained late for France to help seal the upset.

“I definitely thought he was going to take that momentum and bring it here,” Fox said. “I haven’t talked to him all that much, don’t know his personality, but my personality is to go get it. As an athletic point guard, getting two feet into the paint, trying to get to your spot, rise up. He’s a long, tall point guard, and I think he should use his length even more.”

It’s impossible when evaluating Ntilikina and Smith not to recall, or lament, their presence in New York as a result of trademark management misadventure. In a betrayal of ownership logic, the drafting of Ntilikina was presided over by Phil Jackson shortly before he was canned as team president by James L. Dolan for threatening to trade Kristaps Porzingis, who was then the franchise crown jewel. Smith, along with future draft picks and salary cap space, was acquired after Dolan gave the green light on trading Porzingis to Dallas for having the nerve to express his disgust over such franchise chaos.

Got that? This Knicks history haunts them, from one management team to the next. Fizdale, for his part, exacerbates the specter of instability with his chronic lineup tinkering. Players notch 30 minutes one night and then disappear into the coach’s witness protection program the next.

On Sunday night, Fizdale decided to start Bobby Portis over Mitchell Robinson at center, leaving the Knicks with no rim protection and no ability to energetically defend the perimeter — a Robinson specialty — in switches. By the time Robinson appeared, the Knicks were down 9 and, soon after, out.

In fairness to Fizdale, he’s in a most unenviable position, with a roster reconstruction that — no matter how much the front office crowed about its Plan B after the snubbing of the most desirable free agents — was comparable to handing out free tickets to passers-by to fill an empty theater minutes before curtain. His team is an amalgam of youngsters the front office expects him to develop and veterans on short-term deals (and mostly from losing teams) who expect to play.

What is the right mix to produce enough wins to steer the ship forward and keep Fizdale’s job secure? Who knows if there is one? The good news is that the Knicks appear to be in no imminent danger of losing the city to the Kevin Durant-less Nets, who have staggered out of the gate. The Knicks also have a bunch of upcoming games that should be winnable if they play as they did in losing at the buzzer Friday night in Boston.

The best news, of course, has been the rapid emergence of R.J. Barrett, who is providing solid evidence of future stardom, provided the coach remembers that nurturing talent is part of developing it.

Fizdale snapped when questioned why Barrett, among the league leaders in minutes played, reached 40 minutes on Sunday night in garbage time, noting that the team had a day off on Monday. He also said people needed to stop focusing on load management. “Latrell Sprewell averaged 42 minutes for a season,” he said. “This kid’s 19 years old. Drop it.”

Counterpoint well taken. And if that’s a problem, it’s the least of them for the Knicks.