Kyrie Irving Is Back, as if He Never Left 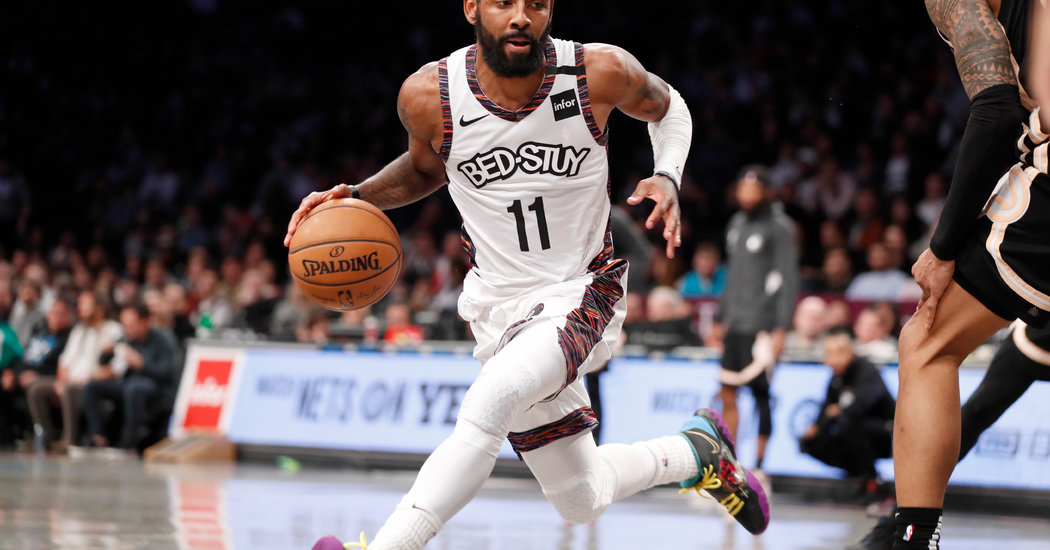 Do not be alarmed by the gusts of wind you heard on Sunday evening. Sighs of relief from an entire borough of New York City can be jarring.

Kyrie Irving made his return to the Nets at home against the Atlanta Hawks, and it was almost as if he had never left. The mixture of dazzling ball-handling and jaw-dropping drives into the paint was on full display, as the Nets jolted the Hawks in a game that was never in doubt, 108-86. It was only the Nets’ second 20-point win of the season.

“What I liked is that he didn’t force anything,” Nets coach Kenny Atkinson said. “He just kind of played it like a pro. My fear was, being out so long, he’d try to really force things. He was just in a perfect flow.”

Atkinson, in referring to a “perfect flow,” was almost literally correct. Irving, playing in his first game since Nov. 14, was exceptional, missing only one of his 11 shots en route to scoring 21 points in a brisk 20 minutes.

The Hawks were missing their best player, the dynamic guard Trae Young. In the grand scheme, this matchup was a mere pebble in the ocean of meaningful wins. But in a vacuum, it was meaningful because Irving temporarily allayed concerns about his injury and reminded everyone of why he was one of Brooklyn’s marquee free agent acquisitions from the summer.

Irving had missed the previous 26 games because of an ailing right shoulder, which he had described as an impingement, in addition to bursitis, a condition that causes joint pain. But his performance Sunday was a stark contrast from just last week, when Irving told reporters that he couldn’t lift his shoulder while taking jump shots. It didn’t sound like someone close to returning to anything resembling professional basketball, raising fears that Irving’s injury was worse than previously believed. Irving floated surgery if his shoulder did not respond to the cortisone shot he said he had recently taken.

“It just sucks, man,” a downbeat Irving said then. “It really is disheartening.”

But on Thursday, Irving surprised observers by practicing with the team and taking part in full five-on-five workouts. He suggested he might be able to come back within a week. And then came the even more unexpected announcement that Irving would make his return this weekend. Clearly, the shot and weeks of rehab have lessened Irving’s pain. Maybe he can lift the shoulder a bit more now. But shoulders are finicky, and who knows how Irving’s responds to the rigors of a 48 minute N.B.A. game? Or whether this delays an inevitable surgery which causes him to miss time when Kevin Durant makes his return next season, when the Nets are expected to be an actual championship contender?

But let’s give credit where credit is due. Irving had every reason to shut it down this season, especially given the risks of aggravating his shoulder. The Nets, currently at 18-20 and in the Eastern Conference’s seventh seed, are not going to win a championship in what is essentially a bridge year for the team. Not without Durant. They are likely to be the underdog in the first round of the playoffs, assuming they get there.

And there are some legitimate questions about how Irving will fit next to the emergent Spencer Dinwiddie. On Sunday, Nets coach Kenny Atkinson opted to pair the two in the starting lineup and bring Caris LeVert, who missed several weeks because of surgery to repair ligament damage in his right thumb, off the bench. Dinwiddie, a ball dominant guard just like Irving, shot the ball only seven times against the Hawks. In the long run, starting Dinwiddie and Irving in the same backcourt is likely to cause some defensive issues. And at this point, LeVert’s production has warranted a starting role.

But for now, Irving is disregarding those concerns.

“Every time someone asks about chemistry, you’ve got to have reps. You have to be out there together. But I think something that doesn’t really get mentioned a lot is that when you’re a great basketball player or a great basketball mind, you’re able to play with anyone out there on the floor,” Irving said.

Instead, Irving is giving this strange Nets season another go. That’s a strong signal of commitment to his teammates, the front office and the paying fans. (And the sighs of relief aren’t just from Brooklyn. The last thing the league office needs is for star power to remain sidelined.) Let’s not forget that Irving was an absolute force in the 11 games he played this season before the injury. He was averaging 28.5 points, 7.2 assists and 5.4 rebounds — all on pace for career highs. On opening night against the Minnesota Timberwolves, with chants of “Kyrie’s home!” flying around the rafters, Irving dropped a 50 point masterpiece. It was a clear reminder of the fact that when Irving is engaged, he is easily one of the best players in the world.

“Obviously, we play hard, but we want to be a championship level organization,” Irving said after the game. “We want to do that for the next few years, competing. When I’m done playing basketball, this culture here will still be consistent. That’s what I’m after. That’s a long-term goal. But obviously it starts with being here for the guys.”

The Nets could certainly use Irving’s presence on the court, although strangely, they were only 4-7 in the games he played before the shoulder caused pain. In his absence, the Nets were 13-13. At one point, the team was 9-3 without him, riding the backs of Dinwiddie and an improved Jarrett Allen. But the league caught up with a franchise without Irving and LeVert. Near the end of December, the Nets fell into a seven-game losing streak, stopped by a rousing win on Friday against a strong Miami Heat team.

The team was able to remain competitive because of their defense, ranking fifth in the N.B.A. during the span of games Irving missed. Where the Nets really missed Irving was as a playmaker in particular. While Irving rehabbed, the Nets were one of the worst scoring teams in the league, ranking 28th in offensive efficiency. With Irving, the Nets were 12th. That’s how much difference one All-N.B.A. level scorer can make, as Allen noted.

“If you see Kyrie going to the basket, you need about four people to stop him from scoring it,” Allen said.