Lakers and Clippers: The Back-to-Back to Beware 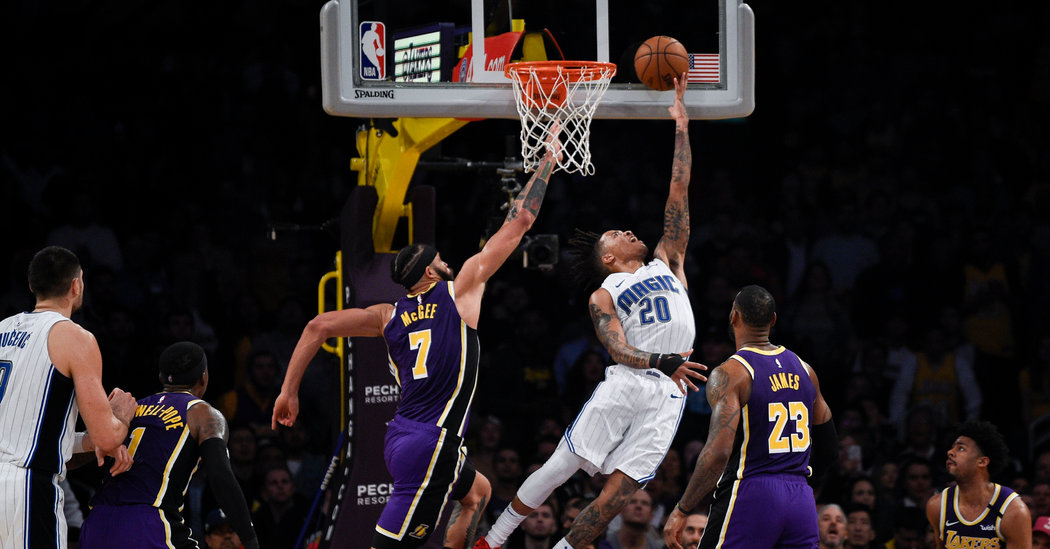 LOS ANGELES — The Orlando Magic were less than 24 hours removed from the elation of a stunning victory this week when Coach Steve Clifford found himself admonishing his players after one of their most lethargic losses of the season.

“If you want to be really good, you have to find your intensity every night,” Clifford said. “That’s the way it works.”

The N.B.A. schedule tends to be unforgiving, especially for teams that visit Los Angeles these days. The highs can be extraordinarily high, as the Magic discovered after upending the Lakers on Wednesday. But the lows are often very low, which was the case after the Magic were then trounced by the Clippers on Thursday.

“That back-to-back,” Magic shooting guard Evan Fournier said, “is probably the hardest you can do in this league.”

Amid an 82-game test of endurance, no facet of the regular season is more universally dreaded by coaches and players than games on consecutive nights. The league has cut back in recent years, but they still exist. And this season, one particular sequence has emerged as a challenge of a higher order: the Staples Center back-to-back.

Nine teams will face the Clippers and the Lakers in back-to-backs this season. Playing one night and having to do it again the next day is tough enough. But a back-to-back against two teams with championship aspirations? On their shared home court, no less? Unprecedented, and typically no fun for guests. So far this season, opponents are 2-10 against them at Staples during back-to-backs.

Pity the Oklahoma City Thunder, who lost both ends of their Staples Center back-to-back in November — and have to try again in April.

“This is obviously challenging,” Clifford said. “But it’s what the league is all about.”

Still, it is an unusual gauntlet for opponents. The Lakers and the Clippers have cohabited in Los Angeles since 1984, but never have both teams been such heavyweights at the same time. In fact, seldom have these two organizations had overlapping eras of competence. Most of that is the Clippers’ fault, of course. But only four times in 35 seasons have both teams finished with winning records.

In years past, that meant a Staples Center two-night visit featured some variety: Whenever one of the teams was good (or at least decent), the other was usually lousy (or worse). Now, the Lakers employ LeBron James, the best player of his generation, while the Clippers are led by Kawhi Leonard, a two-time champion who hopes to haul his new team to its first title.

Add to that the potential lure of Los Angeles night life, which can ensnare visiting teams, and these jaunts to the West Coast are not always especially productive, not against the league’s most punishing tag-team. To that end, Clippers Coach Doc Rivers said he always enjoyed being the second half of the back-to-back.

“And I prefer if it’s a Sunday,” Rivers said, “because Saturday nights in L.A. are amazing.”

The Atlanta Hawks had one such weekend trip to Staples Center in November and lost the two games by a combined 70 points.

On Monday and Tuesday, the Cavaliers faced the Lakers and the Clippers in quick succession — and lost by a combined 54 points.

When the Magic arrived at Staples Center on Wednesday morning ahead of their game that night against the Lakers, Clifford emphasized the importance of tunnel vision. He said he could not afford to worry about the Clippers — not yet, anyway.

Clifford recalled being new to the league as an assistant with the Knicks during the 2000-01 season and glancing at the coming schedule. He noticed that the Knicks had a bunch of tough games ahead of them.

“Whoa,” he recalled saying, “December is going to be difficult.”

It was an offhand comment that caught the attention of Tom Thibodeau, then one of the team’s more seasoned assistants. Thibodeau gave Clifford some advice: Don’t start studying the schedule, because all you’ll do is scare yourself and everyone around you. Clifford said it was a bit of wisdom that had stuck with him through the years.

“All you can do is worry about your team and how you’re playing,” he said.

Which is not always easy. In an interview before his team’s game against the Lakers, Clifford noted how the Magic’s trip to Staples was coming amid a brutal stretch of their schedule: It was the third game in a six-game trip, and part of a jam-packed mid-January schedule. He planned to monitor his players’ minutes, he said — not necessarily because of the back-to-back against the Lakers and the Clippers, but because of the grind of the schedule as a whole.

“You obviously need to have a big-picture view,” Clifford said. “But you’re still trying to prepare as a group to win every game.”

The Lakers were without Anthony Davis, who missed Wednesday’s game with a bruised backside, and the Magic were ready to heed Clifford’s message. Markelle Fultz, the team’s starting point guard, finished with a triple-double in the Magic’s 119-118 win.

“Our mind-set was the same going into the game,” Fultz said. “We all believed we had a chance to win.”

The bad news for the Magic was that the Clippers were waiting for them the following night. Orlando trailed by as many as 23 points before halftime in a 122-95 loss.

“We won’t beat anybody playing with that intensity level,” Clifford said outside the visiting locker room. “We have a younger team, and hopefully we learn from it. I will say this: It’s not characteristic of who we’ve been.”

At the same time, it could have been far worse. The Magic fared better than most.

A Grieving Young Tennis Star Finds Solace on the Court