LeBron and Anthony Davis: The Scariest Duo of Them All 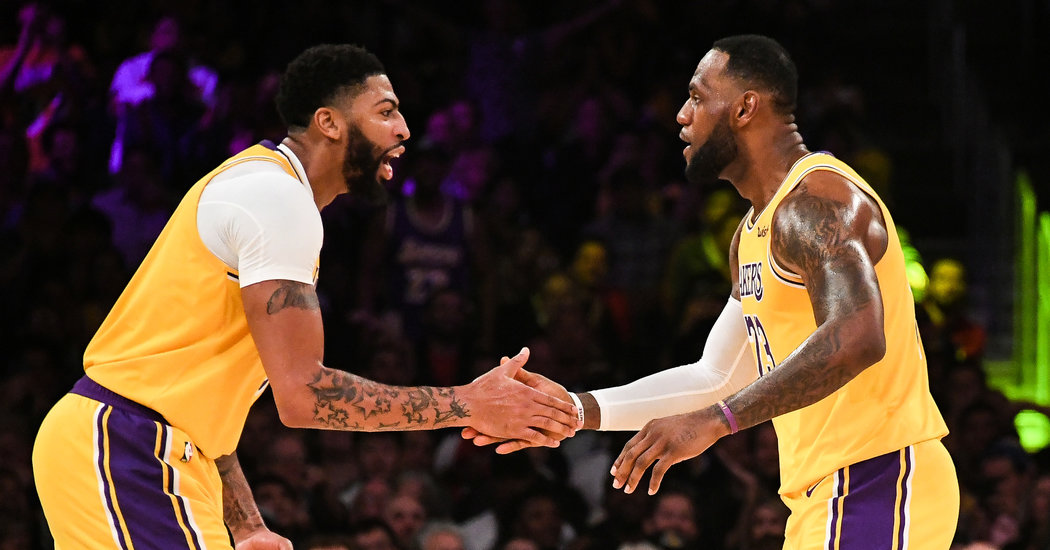 DALLAS — I have lamented the various ills of the N.B.A.’s opening month plenty. It is time to give thanks for what happened on the first day of November: My press row seat at American Airlines Center made it feel as though I could reach out and touch the best game of the season so far.

The Los Angeles Lakers’ overtime victory last Friday night in Dallas was one of those instant classics. You had the Mavericks’ young-star tandem of Luka Doncic and Kristaps Porzingis jousting with what is looking more and more like the most formidable duo in a league full of them: LeBron James and Anthony Davis.

The reality is that a showdown of this magnitude, served up to a national ESPN audience, came too soon for Porzingis, the former Knick. He had played just six regular-season games after a 20-month absence. It’s way too soon to judge him; give Porzingis more time to regain the requisite confidence and zip in his legs to fly around the floor the way James, Davis and Doncic were.

Those three, by contrast, are ripe for judging, grading and outright fawning over.

Doncic looks like the most cocksure 20-year-old European import this league has seen. On the other side, James and Davis are meshing fantastically, even though almost everyone you speak to in Lakers circles is convinced that the offense is woefully behind where it will ultimately land because the team lost considerable practice time during its chaotic trip to China last month.

With James as engaged defensively as we’ve seen him in years, combined with Davis’s ability to protect the rim, change shots and cover copious amounts of ground, Coach Frank Vogel awoke on Tuesday presiding over the league’s No. 1-ranked team defense. Early as it is to make too much of such statistics, it’s difficult not to be moved at least a little by the Lakers’ defensive rating when they’re allowing a mere 96.3 points per 100 possessions.

The Clippers’ ceiling, across the hall at Staples Center, would still appear to be the league’s loftiest, given that Kawhi Leonard & Co. haven’t seen Paul George in uniform yet. But the Lakers clearly have considerable room to improve offensively, which raises the question: Is the league’s title race really as wide open as we thought?

For all the rightful claims you could make about small sample sizes and knee-jerk reactions, if you offered me a choice today between the two L.A. teams and the field to win the championship, I would have to go with the Clippers-Lakers ticket.

Health, as usual, will tell us a lot. If James and Davis can manage a regular-season total of games played in the 70s and enter the postseason (relatively) injury-free, no one will want to see these Lakers in the playoffs. Not even the Clippers.

I’m fairly certain that Dwight Howard won’t be able to maintain his 79.2 percent shooting from the floor for a whole season, but he looks as useful as a role player as Green and Avery Bradley. Kyle Kuzma, meanwhile, has only just returned from the foot ailment that prevented him from representing the United States at the FIBA World Cup in September, so another potential boost looms for the Lakers when he finally moves into his projected slot in the starting lineup.

There’s also every chance that the additional ballhandler Vogel so badly needs to ease LeBron’s playmaking burden and help create more shot opportunities for the Lakers’ role players could come from within.

Rajon Rondo (calf) hasn’t been healthy enough to play, but when you spend time around this team you hear over and over again how well he’s shooting the ball in practice. Everyone in Lakerland is eager to see how Rondo’s purportedly improving aim from the perimeter, at age 33, translates to real games. He’s certainly capable of addressing the playmaking void if his shooting doesn’t cause spacing issues.

Alex Caruso is another name of note in this discussion. His opportunities have been limited even with Rondo out, but some in the organization believe he has the potential to be a dangerous secondary ballhandler who shoots the ball well enough to keep defenses honest.

What you see most of all from these embryonic Lakers is that LeBron and A.D. seem so genuinely happy to be together. They can do things together, given James’s size and strength and Davis’s mobility and versatility, that would make Magic Johnson and Kareem Abdul-Jabbar envious. Ditto for Kobe Bryant and Shaquille O’Neal.

After six consecutive seasons out the playoffs for this franchise — which undoubtedly feels like 60 to an impatient fan base so accustomed to championship contention — there has been no tangible drama with this group.

The Lakers weathered injuries and travel chaos throughout a training camp that they hoped would go much smoother, but they’ve started well anyway.

How long will that last? Is the star duo’s joy only as enduring as its shared health? What happens if the Lakers lose out to the Clippers or Houston or someone else in the chase to add Memphis’s Andre Iguodala?

Those are all pertinent curiosities.

For now, though, there is little to question. James had 39 points, 16 assists and 12 rebounds on Friday night — two months away from his 35th birthday. Davis had 31 points and 8 rebounds and, combined with the resurgent Howard, snuffed Porzingis out of the game in the second half.

Doncic was dazzling with 31 points, 15 assists and 13 rebounds, despite a fourth-quarter laceration on the back of his head from a collision with Howard that required stitches. (The team insisted afterward that he did not have a concussion.) Yet it was King James and the Brow who left their foes with the deepest sense of dread.

The kind that comes from watching the budding union of two of the five best players in the world.

“With those guys on our team,” Green said, “I don’t think anyone around here panics.”

This newsletter is OUR newsletter. So please weigh in with what you’d like to see here. To get your hoops-loving friends and family involved, please forward this email to them so they can jump in the conversation. If you’re not a subscriber, you can sign up here.

You ask; I answer. Every week in this space, I’ll field three questions posed via email at marcstein-newsletter@nytimes.com. (Please include your first and last name, as well as the city you’re writing in from, and make sure “Corner Three” is in the subject line.)

How good can Derrick Rose be this season? Could he be an All-Star in a weak Eastern Conference? — Guy White

STEIN: Making an All-Star team as a reserve who plays only 25 minutes per game, even in the East, is probably out of reach. But D-Rose will certainly be a major factor in the Sixth Man Award race and will be one of the leading names on the N.B.A.’s All-Bargain Team if he continues to produce at his current gaudy levels (20.8 points and 6.3 assists per game while shooting a ridiculous 56.2 percent from the floor).

The Pistons were able to sign Rose to a modest two-year deal in July worth $15 million, capitalizing on Minnesota’s apparent determination to sever any conceivable tie to the Tom Thibodeau era. You wonder, given the Timberwolves’ need for backcourt production, if they regret letting him get away.

Scouts who have seen Rose in person this season are raving about the “pop” that has resurfaced in his game at age 31. The full-speed drives to the rim and elite finishing are back.

The issue, as always, will be health. To the dismay of even his peers, given Rose’s standing as one of the most popular players among fellow pros, he has missed Detroit’s past two games with a hamstring injury.

After two weeks of games, would you like to revise your predictions on who will make it in the East and West? — John Marzan

The longtime policy here at Stein Line HQ dictates that there can be no revising of predictions. You make them before the season — and you live with them.

(I have the Bucks over the Clippers in the finals.)

It helps, of course, that I am on record as saying Golden State will miss the playoffs. Any pundit who proclaimed that the Warriors would maintain their top-eight status in the West would want to have that prediction back now that Stephen Curry will be sidelined for at least three months.

But no team, as of Tuesday morning, had played more than eight games. It’s a little too early for do-overs — for anyone.

Do you think the Rockets should have tried one more year with the James Harden/Chris Paul duo? — Maxwell Carus

As wretched as the reconfigured Rockets have been defensively through seven games, I do buy into the idea that Harden and Russell Westbrook will be invested in each other’s success far more than Harden and CP3 ever could have been after all of last season’s tumult.

I have generally been a loud skeptic about this Harden-Westbrook reunion, but I also can’t dispute those who would argue that bringing back the bulk of the same team from last season would have been too toxic. Given the limited trade market for Paul with three years and $125 million left on his contract at the time of the swap with Oklahoma City, you can see why Houston rolled these dice.

It is also interesting to note that when talking to various league insiders, there is still sufficient respect for the Rockets that they are routinely projected as a top-four seed in the West. That’s irrespective of their defensive frailties.

Miami’s Kendrick Nunn spent last season playing for the Santa Cruz Warriors in the N.B.A. G League after going undrafted — available for call-up to all 30 N.B.A. teams. Through six games with the Heat this season, as a 24-year-old rookie, he is averaging 19.5 points in 29.5 minutes per game and has emerged as a wholly unforeseen Rookie of the Year Award candidate. As a collegian, Nunn was dismissed from Illinois in 2016 after pleading guilty to misdemeanor domestic battery, which is believed to have made several teams reluctant to sign him. Miami signed Nunn to a three-year deal on the final day of last season.

Friday marks the start of the G League’s 19th season.

The N.B.A. finals has never delivered what we just witnessed in the World Series between the Washington Nationals and the Houston Astros, in which the home team failed to win a single game. The lowest win total for home teams in the N.B.A. finals is one — and it happened last season (Toronto over Golden State) and in 1993 (Chicago over Phoenix) in series that went six games rather than seven. According to my trusty historian pal @ToddSpehr35, home teams also won only one game in 1953, 1990, 1991 and 2001 — but those were all five-game series.

Houston’s 159-158 victory over Washington last week, which was taking place at the same time that the Nationals were beating the Astros in Game 7 of the World Series, was the first N.B.A. game in 29 years in which both teams scored 150 points before reaching overtime. According to our friends at Basketball Reference: It happened twice in November 1990, when the Denver Nuggets, one of the most porous defensive teams in league history thanks to a freewheeling style under Coach Paul Westhead, lost shootouts to Golden State (162-158) and San Antonio (161-153) in a five-day span.

We are 140 days from the only other 76ers-Timberwolves matchup on the calendar this season: March 24 at Minnesota. The Sixers’ Joel Embiid and the Wolves’ Karl-Anthony Towns were suspended two games each after a physical altercation last Wednesday in Philadelphia.