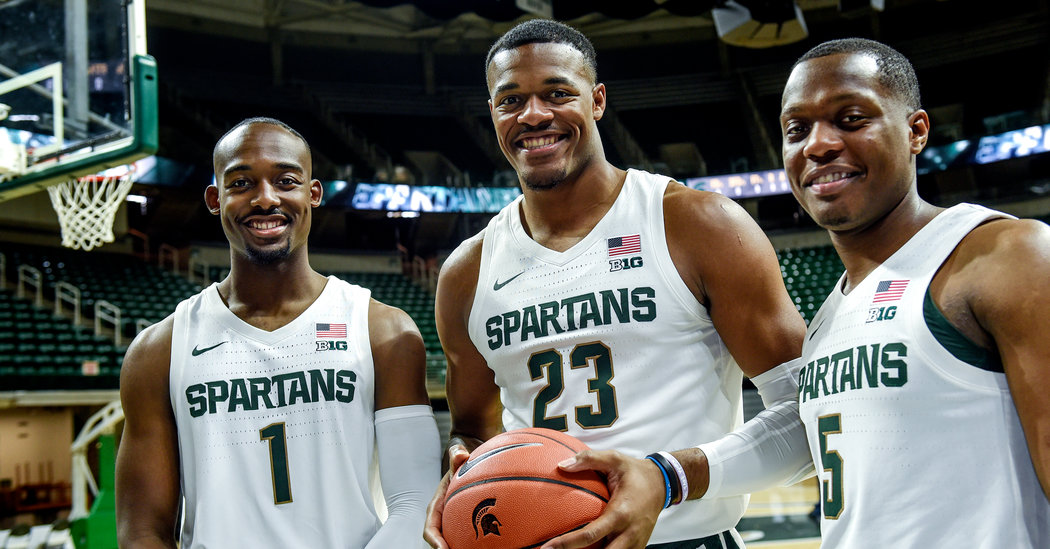 There isn’t much Michigan State has yet to accomplish under Hall of Fame coach Tom Izzo, from Big Ten titles and Final Four trips to winning a national championship.

The Spartans can now add another milestone to the list: They are No. 1 in the Associated Press Top 25 men’s college basketball preseason poll for the first time in program history.

The Spartans were the overwhelming choice in the poll released on Monday, with their veteran returnees led by star Cassius Winston. They topped 60 of 65 ballots in voting results, easily outdistancing No. 2 Kentucky and No. 3 Kansas as the only other teams to receive first-place votes.

Duke was fourth, followed by Louisville, Florida, Maryland, Gonzaga, North Carolina and Villanova to round out the top 10.

Michigan State had been ranked No. 1 for 12 weeks in the A.P. poll before Monday. But none had come in the preseason poll, with the Spartans starting at No. 2 four times in the past decade.

“It’s almost bizarre to me because I would have thought Magic’s team was No. 1,” Izzo said in an interview with the A.P.

Nope, the Magic Johnson-led bunch that beat Larry Bird and Indiana State in the 1979 N.C.A.A. title game started at No. 7.

The Spartans won 32 games last year and reached Izzo’s eighth Final Four before falling to Texas Tech. They return Winston with fellow starters Xavier Tillman and Aaron Henry from that run, and they get back another starter in Joshua Langford after he missed much of last year with a foot injury.

That nucleus is good enough that only one voter picked the Spartans as low as third, with four others picking them second and the rest at No. 1. They will be tested right away, too: the Spartans open the season against Kentucky in a 1-vs-2 matchup Nov. 5 in New York.

“This is a program deal and it’s the players in the program, and I’m really proud of them for that,” Izzo said. “Unfortunately, what you are at the beginning of the year doesn’t help you at the end of the year, but I think it does say something about the program and what we’ve done over these years.”

Roughly half of the voters (33 of 65) chose Michigan State, Kentucky and Kansas in some order atop their ballot. Kentucky received two first-place votes, while Kansas received the other three.

It marks the ninth straight year that John Calipari’s Wildcats have been a top-five preseason pick and seventh in a row for Bill Self’s Jayhawks, who open the season with the program facing N.C.A.A. charges tied to a federal corruption investigation into the sport.

Kansas and Duke open their seasons against each other on the same bill with Michigan State-Kentucky.

The reigning champs, Virginia, start at No. 11.

Virginia has gone from facing questions about how it would respond to an unprecedented 16-over-1 tournament upset loss to the University of Maryland-Baltimore County to how it will build on its run to its first N.C.A.A. title. Tony Bennett’s Cavaliers are 11th after losing De’Andre Hunter, Ty Jerome and Final Four most outstanding player Kyle Guy to the N.B.A. draft. It is the lowest preseason ranking for a champion since Connecticut was 17th to start the 2014-15 season.

The Atlantic Coast, Big Ten and Southeastern conferences each had four ranked teams to lead all leagues.

The A.C.C. ended last season with four top-10 teams, then picked back up with four teams all ranked in the top 11.

No. 18 Ohio State and No. 23 Purdue joined Michigan State and Maryland for the Big Ten’s quartet, while the SEC had No. 22 L.S.U. and No. 24 Auburn — fresh off its Final Four run — joining Kentucky and Florida.

Some unranked teams are worth watching.

The Pac-12 could quickly add to its total with Washington and Colorado as the top vote-getters among unranked teams. Washington twice appeared in last season’s poll at No. 25. But it’s been a much longer wait for the Buffaloes, who haven’t cracked the poll since January 2014, but have five starters back and are picked to finish second in the Pac-12 behind No. 15 Oregon.