New Orleans Is Ready to Love Zion Williamson, Even if It Has to Wait 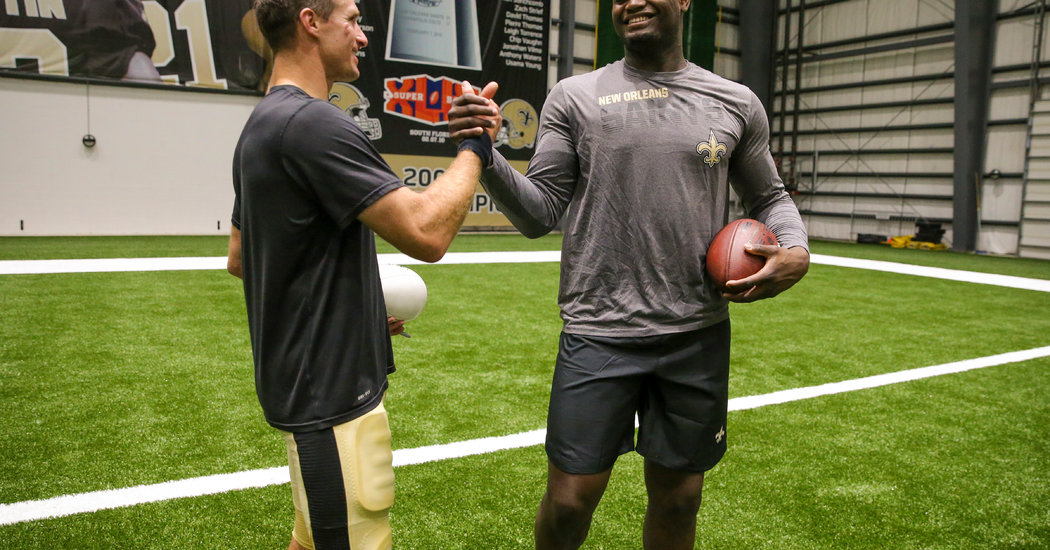 NEW ORLEANS — The advice to Zion Williamson came from Saints quarterback Drew Brees. It is passed from athlete to athlete here like an heirloom: “If you love the city of New Orleans, it will love you right back.”

This city throws its arms open to new arrivals, sharing its music, its food, its rich culture. From its athletes it wants something in return: confirmation that they want to be here. Validation that New Orleans punches above its weight, that a small market can hold its own in the big leagues.

As skilled as forward Anthony Davis was for the N.B.A.’s Pelicans, many fans say that he seemed to be in New Orleans but not of New Orleans. His protracted divorce from the team last season and his departure to seek championships in Los Angeles with LeBron James and the Lakers left many here feeling jilted, a hoops marriage vacated at the altar of competition and finance.

The local embrace is more hopeful for Williamson, 19, who arrived by unlikely chance via the No. 1 pick in the draft lottery and whose teenage charisma, explosive power and agile grace have made him the most anticipated N.B.A. rookie since James joined Cleveland out of high school in 2003.

But the city will have to wait, after the team announced its beloved young star would miss six to eight weeks after undergoing surgery for a torn meniscus in his right knee.

In the meantime, the team’s fans are likely to grow even fonder of Williamson in his absence, especially if New Orleans struggles in the early going.

Cleverly, Williamson has associated himself with the sport that people care most about here — football — appearing at games involving the Saints, Tulane and Louisiana State. And he has developed a kind of bromance with Brees, the Super Bowl winner who gave him a framed jersey that said, “To Zion — Passing the torch to you!” For this summer’s ESPY Awards, Brees dressed his three sons in maroon tuxedos almost identical to the one that Williamson wore.

Football’s imprimatur has been more than enough to persuade Pelicans fans. An estimated 10,000 showed up for a public practice. The team has sold more than 12,000 season-ticket packages, a franchise record. Its lone home preseason game drew an announced sellout of 17,954. There were empty seats but no vacant enthusiasm.

“The only thing that would come close for me to what we’re experiencing with Zion would be David Robinson getting out of the Navy and coming to San Antonio,” said Pelicans Coach Alvin Gentry, who was an assistant with the Spurs in the 1989-90 season.

New Orleans is not a place that expects perfection. It is patient and willing to grant second chances. It stuck by the Saints through 20 consecutive non-winning seasons as an expansion franchise. But just as this city knows how to put out the welcome mat, it knows how to hold a grudge, even if playfully.

After a referee’s blown pass-interference call during the N.F.C. Championship game probably kept the Saints out of the Super Bowl in February, the town held a Boycott Bowl parade and concert. Less gleefully, a Saints fan filed a lawsuit against the N.F.L. that reached the state supreme court in Louisiana before being dismissed.

So when Davis asked to be and then was traded after last season, it was no surprise that feelings were hurt. To hear fans tell it, it was not just that Davis left, but the way he left — wearing a “That’s all folks!” T-shirt to his final game in New Orleans.

When New Orleans secured the first pick via the N.B.A. draft lottery in May, some in the media surmised that Williamson might try to return to Duke for his sophomore season. But his stepfather, Lee Anderson, felt a small Southern market could be a good fit for Williamson, who grew up in South Carolina, telling ESPN in a radio interview, “We’re excited about the Crescent City down there in New Orleans.”

Two days after the draft in June, Williamson wrote on Twitter, “Dream is finally here, ready to get to work and give the City of New Orleans everything I got.”

He kept his word during the preseason, muscling and whirling inside to hit 12 of 13 shots against the Chicago Bulls, then powering to the basket regularly against Rudy Gobert of Utah, the N.B.A.’s reigning two-time defensive player of the year.

“He’s kind of surprisingly agile; he takes a lot of people off guard because of that,” Gobert said. “He can change direction pretty quick.”

As rookies inevitably do, Williamson needs to take a “big step” to improve his defense, Gentry said. But a feathery 3-pointer against Utah suggested that Williamson may be able to hit jump shots when he cannot get to the rim.

There has been much discussion about whether Williamson could handle the wear and tear of an N.B.A. season while carrying 285 pounds on his 6-foot-6 inch frame. Days before the injury, Gentry said he was unconcerned.

“He’s got 8 percent body fat; we should all be so lucky,” Gentry said. “We’re fine with where he is.”

A City of Big Hopes

New Orleans is a predominantly black city known for transcendent African-American entertainers, but the sporting Mt. Rushmore of New Orleans is considered by many fans and experts to only include whites: Brees, Saints Coach Sean Payton, former Saints quarterback Archie Manning and the late New Orleans Jazz star Pete Maravich. Perhaps Chris Paul deserves to be on this list, but feelings about him here have been complicated since he was traded to the Los Angeles Clippers in 2011 after saying he would not sign a contract extension with New Orleans.

Some black fans said it was not important to have a transformative black athlete play in the city. Others said it was. “Anthony Davis had the potential, but he did not embrace New Orleans,” said Edgar Chase III, whose family’s restaurant, Dooky Chase, is a legendary exemplar of Creole cooking.

Chase added: “Now I think Zion has the potential. He’s going about it from the beginning in the right way. He understands the people. He knows us so we can know him.”

Brian Turner, the director of African-American and Diaspora Studies at Xavier University here, said it was encouraging to see Williamson interacting with the artist and activist known as Bmike and high school students, most of them black, who are designing an Air Jordan shoe that Williamson will wear in a game.

Turner said he was curious to see whether Williamson, as he matures, develops a sense of social responsibility that could include opening a school as James did in Akron, Ohio, or supporting other initiatives that encourage young black men to further their education.

“Does Zion run that pathway and have that impact in New Orleans? Who knows,” Turner said. “It would be very much welcomed.”

Of course, academics and community leaders acknowledge, that is a lot to ask of a 19-year-old just beginning his professional career. But Williamson said that at some point, he could see himself addressing issues that are urgent in New Orleans in the post-Katrina era, like affordable housing.

“At a certain age, when I’ve learned how to handle myself, of course, and manage my own stuff, yeah, I’m going to get into that a little bit,” he said.

For now, Chase said, it was more than enough for Williamson to excel at basketball.

“Our community is strong enough to develop its own structures of success, but we don’t have the innate talent to dunk a basketball or shoot a 3-pointer or block a shot that Zion has. We can find the other stuff. We can’t find you, Zion.”