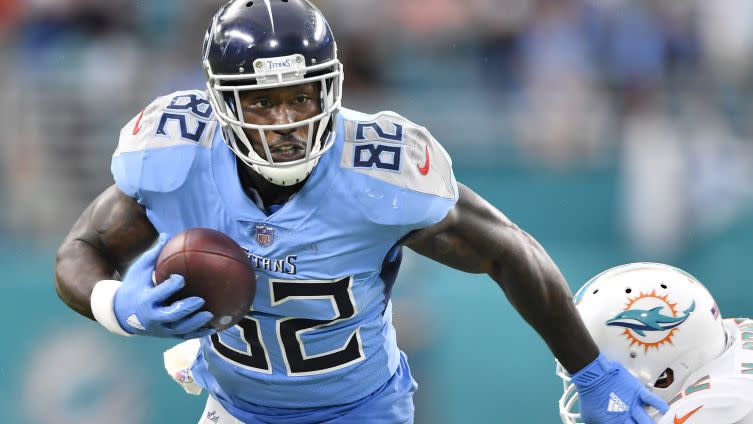 Tight end was a weakness for the New England Patriots last season, and that could again be the case in the 2020 NFL campaign.

Patriots tight end Matt LaCosse reportedly has decided to opt out of the upcoming season, which makes an already lackluster tight end depth chart even worse.

Download the MyTeams app for the latest Patriots news and analysis

LaCosse was the likely starting tight end entering training camp. Now the Patriots are left with Ryan Izzo, two rookies in Devin Asiasi and Dalton Keene, and undrafted free agents Jake Burt and Rashod Berry at the position. A few rookies and a player in Izzo with six career games played is far from an ideal scenario at tight end, so it would make sense for the Patriots to look at other options.

One of those options is the free agent market, but unfortunately for the Patriots, there aren’t a ton of enticing players available.

Here are the best free agent tight ends the Patriots could pursue:

Walker is arguably the top tight end available. He’s a three-time Pro Bowler who tallied 60-plus receptions in five straight seasons from 2013 through 2017. Durability is a concern with Walker, who will celebrate his 36th birthday on Aug. 12. He played in only one game in 2018 and just seven games last season. An ankle injury ended his 2019 season in November.

Jordan Reed and Charles Clay are two other veterans with plenty of experience. Reed’s concussion history would be a worry, though.

Even if the Patriots do sign a veteran tight end for more depth, they will need at least one of their rookies at the position to have a strong first season.

Kyle Busch out early after hard hit at New Hampshire

NCAA board of governors could cancel conference championships

What time and channel is the Loudon NASCAR race today?

What does Arsenal’s FA Cup victory mean for European qualification?

Odell Beckham Jr.: I’m Relaxed With the Idea I Might Not Be Playing

Trash Talkin’ Tuesday: Sammy Watkins What Are You Thinking? [Video]