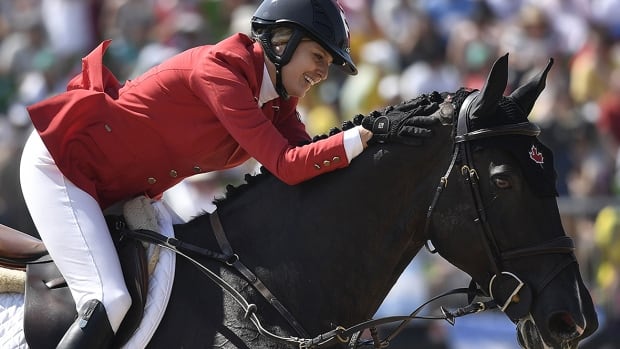 Tiffany Foster of North Vancouver, B.C., earned her second victory in a week and fourth at Spruce Meadows on Saturday in Calgary.

Riding Brighton, her 15-year-old gelding, Foster finished with a clear round and time of 51.82 seconds to defeat Ireland’s Conor Swail in the 1.50-metre Suncor Winning Round.

Three other Canadians were part of the 10-rider field, led by three-time Olympian Eric Lamaze of Schomberg, Ont., the country’s most decorated show jumper who has been battling brain cancer the past three years.

The top ten competitors of the first round qualified for the Winning Round.

Foster, a national team rider mentored by Lamaze at his Torrey Pines Stables, fronted a 1-2 finish with Calgary’s Kara Chad in the 1.50m event at the ATCO Classic Grand Prix last weekend.

On Thursday, the 37-year-old posted a clear round and time of 47.83 seconds for a fourth-place finish in the CANA Cup championship on Day 1 of the Spruce Meadows Masters.

Nayel Nassar of Egypt was third in Saturday’s Winning Round in 52.62 to edge Lamaze after beating the Canadian and his veteran mare Fine Lady 5 by 10-100ths of a second in Thursday’s CANA Cup jump-off.

In March, Spruce Meadows cancelled its summer show jumping series for a second consecutive year because of the COVID-19 pandemic.