Players to Watch in the 2019-20 College Basketball Season 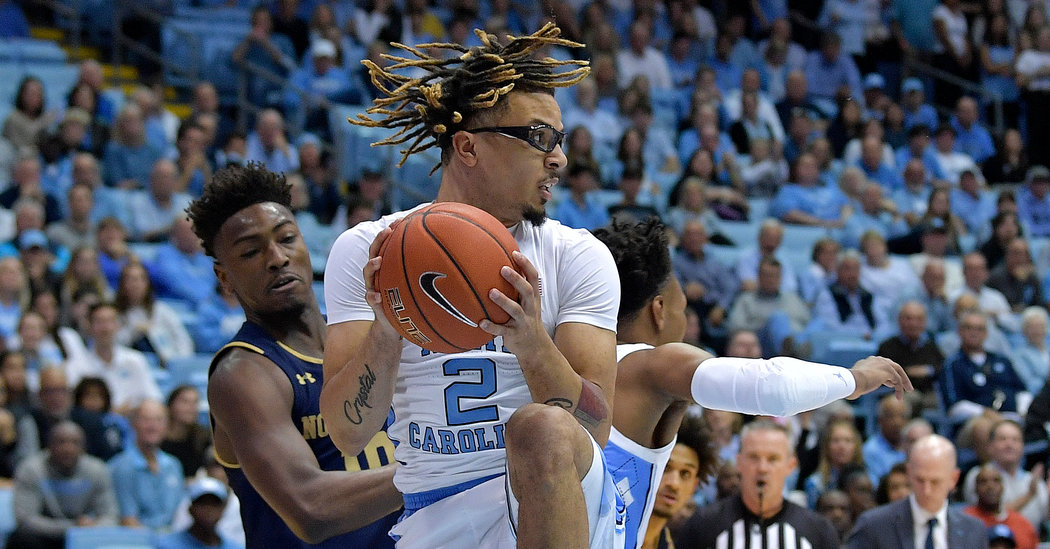 There are roughly 4,000 players in Division I men’s college basketball every season, but only a select few who can truly affect the game every time they are on the floor.

This season begins after a year in which many of the top players — Zion Williamson and RJ Barrett, to name two — left college for professional opportunities. That has created an opening for many new names to emerge.

Here are a few you should get to know long before March Madness arrives.

James Wiseman, Memphis During the preseason, Memphis Coach Penny Hardaway compared Wiseman’s game favorably to that of the former N.B.A. star Chris Bosh. Wiseman, at 7-foot-1, was the top-ranked prospect in this year’s freshman class by virtually every recruiting service, and he is the favorite to be the top pick in next year’s N.B.A. draft. He also is the biggest of many reasons Memphis is one of the most intriguing teams in the country this season.

Cole Anthony, North Carolina Don’t be surprised if Anthony mimics the freshman season that Trae Young had for Oklahoma a few years ago, even if that’s an unfair expectation. The 6-3 Anthony is tailor-made for Roy Williams’s high-octane system, and he could put up impressive numbers for a Tar Heels team that lost its top five scorers from last season.

Isaiah Stewart, Washington The Huskies beat out several blueblood programs for Stewart, a player from upstate New York who considered Syracuse before heading to the Pacific Northwest. A broad-shouldered 6-9, Stewart has the talent to be a first- or second team All-American. “He has a chance to be the best player on the floor each and every time he plays,” Washington Coach Mike Hopkins said.

Anthony Edwards, Georgia Tom Crean has coached both Dwyane Wade and Victor Oladipo during his career and he said neither came into their first year of college basketball with the sizzle of Edwards. “The athleticism, the balance, the explosion are things I’ve never been a part of,” said Crean, now the Georgia coach. “I’ve never been around somebody in 20 years as a head coach that has what he has in that area.” Draft analysts are already buzzing about Edwards as a top N.B.A. pick next summer.

Jeremiah Robinson-Earl, Villanova How highly does Villanova Coach Jay Wright think of Robinson-Earl? Wright said last week that his staff compares Robinson-Earl to the former Villanova and current Dallas Mavericks guard Jalen Brunson, only at a different position. “He’s a great passer. He picks up everything really quick. He’s really committed. He eats well. He gets rest,” Wright said. A versatile talent with a breathtaking face-up game, Robinson-Earl should flourish in the Wildcats’ flowing offensive system. He could be Villanova’s best player already.

Quentin Grimes, Houston Coach Kelvin Sampson led the Cougars to the N.C.A.A. tournament’s round of 16 last season and with Grimes, the former Kansas guard, now eligible after receiving a waiver that allows him to play immediately, they could get back there again. A silky smooth guard, the 6-5 Grimes averaged 8.4 points for the Jayhawks last season and his presence should make Houston — not Memphis — the team to beat in the American Athletic Conference.

Kerry Blackshear, Florida This 6-10 graduate transfer from Virginia Tech is a major reason many observers believe the Gators can unseat Kentucky at the top of the Southeastern Conference. “He’s an interior scorer who can also stretch the defense. He’s stronger than he looks and guys bounce off of him all the time,” said Florida Coach Mike White. Blackshear was the Hokies’ best player against Duke in the round of 16 last season (18 points, 16 rebounds) and should immediately help Florida with his overall feel for the game.

Nate Sestina, Kentucky Sestina made 41 3-point shots and shot 38.0 percent from behind the 3-point line last season at Bucknell before graduating and heading to Lexington. A 6-9 forward, he is leaner and quicker than he was as an undergraduate, and will add some needed shooting and experience to Kentucky’s frontcourt, which lost Reid Travis and P.J. Washington to the N.B.A.

Chris Clarke, Texas Tech Clarke did not play for Virginia Tech after he was suspended for the season for reasons the university never revealed, but he is back and returns as one of the best small-ball big men in the country. He might be a perfect fit in Lubbock with Coach Chris Beard.

Quade Green, Washington A former five-star recruit, Green could have transferred anywhere when he left Kentucky last December. He opted to head to Seattle, where he will become Washington’s primary point guard. Green’s play will go a long way in determining if the Huskies can challenge for another Pac-12 regular season title.

Udoka Azubuike, Kansas The 7-foot Azubuike, who appeared in only nine games as a junior, is 40 pounds lighter than he was last season and looks ready to dominate opponents in the paint. Kansas was 9-0 last season when Azubuike’s season ended with surgery to repair a torn ligament in his right hand.

Tyger Campbell, U.C.L.A. Mick Cronin’s first season as U.C.L.A. coach comes with minimal expectations, but any hopes of qualifying for the N.C.A.A. tournament will hinge on Campbell, a pass-first point guard who can set the table for his teammates. Campbell missed all of last season with a torn knee ligament but could immediately become one of the top floor leaders in the Pac-12 if he can regain the form he showed before his injury.

Andrew Jones, Texas Jones already gave this season a feel-good story by scoring 20 points in the Longhorns’ opener on Tuesday night in his first game back after learning he had leukemia. If he can be consistent off the bench then Texas could have one of the top perimeters in the Big 12, and a direct route back to the N.C.A.A. tournament.

Tristan Clark, Baylor The Bears overachieved last season after losing Clark to a season-ending knee injury, but any hopes of getting to the second weekend of the N.C.A.A. tournament depend on his to be a consistent factor in the lane. If Clark returns to form as an all-conference player, then Baylor has a chance to get Scott Drew to the Final Four for the first time.

Seth Towns, Harvard Tommy Amaker, the Harvard coach, said last week that Towns still hasn’t been fully cleared after a knee injury kept him sidelined for all of last season. Can the Crimson win the Ivy League without him? Yes. Can they win games in the N.C.A.A. tournament without him? Probably not. If Towns is healthy, then Harvard has round-of-16-caliber talent.

The Unkowns (Who Could Break Out)

Obi Toppin, Dayton Toppin, then a 6-9 freshman forward, toyed with the idea of entering the N.B.A. draft after last season, but opted to return to Dayton for his sophomore season. After averaging 14.4 points and 5.6 rebounds, Toppin could flirt with averaging 20 and 10 this year. If he does, the N.B.A. will be an option again in the spring.

Aaron Wiggins, Maryland This could be Mark Turgeon’s best team at Maryland, in part because of Wiggins. The 6-6 wing has gained 15 pounds of muscle since the end of last season and looks physically different. If Wiggins emerges as one of the best players in the Big Ten, the Terps have a chance to make a Final Four run.

Dejon Jarreau, Houston Houston lost its entire starting perimeter from last season, which means that Jarreau, a 6-5 guard, will get more responsibility. After regularly closing out games for the Cougars a year ago, Jarreau most likely will be at the point of attack for the Cougars this season. His scoring average from last year (8.7 points) could double.

Jared Butler, Baylor Butler scored 30 points in the Bears’ opener on Tuesday against Central Arkansas, and he might be the best guard in the country that few people know about. If Butler played for a bigger-name program, he’d regularly be talked about as one of the top perimeter players in the country. Get in on the ground floor with him now.

Nahziah Carter, Washington The Huskies have made waves throughout college basketball thanks to their influx of newcomers, but it would be foolish to forget about Carter, a junior guard. A 6-6 wing, he averaged 11.5 points during two N.C.A.A. tournament games last March, and he will be a menace defensively in Washington’s 2-3 zone.

Canadians still speeding ahead of short track pack — for now