Soccer’s Sleeping Giant, on the Sidelines Once Again 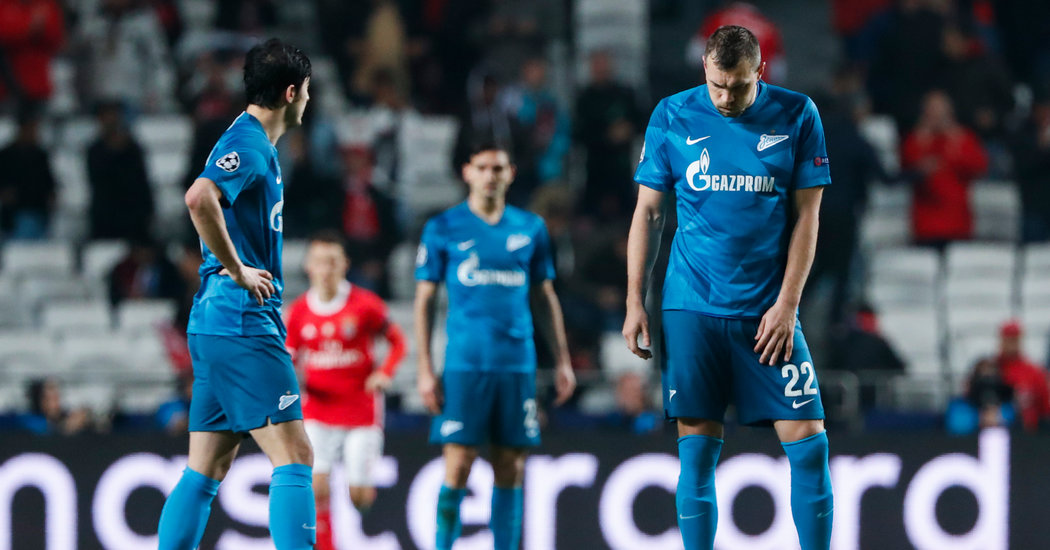 The situation, as Zenit St. Petersburg’s players trooped back into their changing room in Lisbon’s Estádio da Luz, was encouraging. From the moment the Champions League’s groups had been drawn in August, Group G had the look of the most finely-poised, the least predictable: no obvious favorite, no vast financial disparity, no doomed makeweights.

So it had proved. Going into the final round of games, three of the group’s four teams had a chance to qualify for the competition’s lucrative Round of 16. Germany’s RB Leipzig, top of the group, would do so by avoiding defeat away to Lyon. Lyon could get through with a win or a tie, depending on how Zenit fared in its game against last-place Benfica. Even the Portuguese side had something to play for: a win could propel it into third place, and the consolation prize of a spot in the Europa League.

At halftime, Zenit and Benfica were tied, goalless. In the changing room, Zenit’s manager, Sergei Semak, and his coaching staff checked for updates from France. The news was good: Leipzig was winning. If Zenit could just hold steady, a place in the last 16 of the Champions League was there.

Two minutes later, Benfica scored. Within half an hour, Zenit had collapsed completely, conceding a penalty and then scoring an own goal. “It is too hard to take,” the Zenit wing Aleksei Sutormin said afterward. “I am lost for words.”

Lyon, meanwhile, had recovered to snatch a draw against Leipzig. Zenit was not just out of the Champions League, the competition sponsored by its primary backer, the Russian oil giant Gazprom. It was out of Europe altogether.

The next day, a Wednesday, the other Russian team in the Champions League went out the same way: Defeat at Atlético Madrid meant Lokomotiv Moscow finished at the bottom of its group, too. On Thursday, the campaigns of Russia’s two entrants in the Europa League, CSKA Moscow and Krasnodar, drew to a close with a whimper: Krasnodar, which still held out hope of qualifying on the final day, was beaten, 3-0, by Getafe in Madrid.

When European competition resumes next week, Bulgaria, Romania and Cyprus all will have teams present. For the first time since the Champions League and Europa League adopted their current formats, though, there will be no Russian involvement.

There is no simple explanation for why that is. The temptation is to find some sort of broad, overarching theme, something that binds all of the failures together, some fatal flaw in Russian soccer. But the individual circumstances are too different for that to be convincing.

In the Champions League, Lokomotiv had a tough group, featuring not only Atlético but Juventus. Zenit did not, but it was still just 45 minutes from making it through. Perhaps both might reflect, a little, on nothing more than bad luck.

The Europa League exits were more striking. CSKA is mired in financial trouble, having been bailed out by VEB, a state-owned bank, and is searching for an owner. Spartak Moscow — which was eliminated even before the group stage — is recovering from internecine strife, pitting the (former) manager against both the players and the board. And Krasnodar, a team widely seen not just as Russian soccer’s feel-good story but a model of its future, basically just blew it.

The fact that there is no easy pattern to trace, though, should not be taken as proof that Russian soccer has no systemic problems.

Some are relatively new. The collapse of the ruble, in 2014, as well as the rise of the Chinese Super League, brought to an end the era of Russian teams’ recruiting world-class talent through sheer financial muscle. There are still fine imports in the Russian Premier League — Malcom, João Mário, André Schurrle as players, and coaches like Domenico Tedesco — but they have the air, now, of castoffs as much as mercenaries.

In 2015, Russia announced a limit on the number of foreign players a club could field — only six at a time — and employ. The quota has, in effect, simply served to inflate the salaries of homegrown players, entrenching a sort of lucrative mediocrity.

The fact that many clubs are wholly or partly state-owned, meanwhile, has left teams at the mercy of broader economic forces, with budgets cut and ambitions dulled for political, rather than sporting, reasons.

But some problems are longstanding. In the days after Zenit and Krasnodar and the rest fell, the journalist Anton Mikhashenok wrote of the three great failures of Russian soccer: its outmoded youth development programs; its closed-mindedness, with the same old coaches revolving around the same old jobs; and its obsession with results over process, meaning the soccer is not just ineffective but, often, ugly, too.

Russia’s authorities have responded to this season’s failure by talking of reform: the Russian Premier League might expand; the country’s cup competition may be altered; the rules on foreigners may be changed. There is even, as there always is, a movement to change the season back to a spring-fall schedule, rather than the European-style fall-spring calendar introduced in 2010.

“All of these are different forms of self-deception,” Mikhashenok wrote. They are tinkering with the edges, laying the ax to the branches, rather than the root. (And even then, it is hard to see why anyone would do much to change the status quo: Thanks to the stadiums built for the 2018 World Cup, Russian domestic attendances are up.)

Russia has long been a curiosity in soccer. Its teams have occasionally flourished against their peers in western Europe — CSKA and Zenit won the Europa League in 2005 and 2008; Spartak, in particular, made an impression in the Champions League in the 1990s — but the country has never quite punched its weight, even in those cash-soaked, oligarch years of the early 2000s.

What has happened this season may be an aberration, so far, but it is also a reminder that soccer does not wait around. Russia may always have been Europe’s sleeping giant, but that is not a status that lasts forever. At some point, it changes from sleep into something deeper, something more lasting, something from which you do not wake up.

There is almost a touch of genius in the absurdity. For years, there has been pressure on English soccer to incorporate some sort of winter break into its proudly chaotic schedule: The clubs wanted to protect their players, and the Football Association wanted to increase the national team’s chances of performing well in summer tournaments.

The problem was that, while everyone agreed it was a good idea, nobody would give an inch. The F.A. would not countenance changing the date of the F.A. Cup’s third round. The E.F.L. (which runs the three professional leagues below the Premier League) would not alter its flagship knockout tournament, the E.F.L. Cup. The Premier League would not give up its Christmas and New Year’s fixtures. The broadcasters would not consider having a couple of weekends free of elite soccer. Fans agreed with some, most or all of them.

So we have what we have now: a break staggered over two weeks, so that everyone gets a rest, but nobody has to go without soccer; the F.A. Cup’s fifth round shunted to a midweek to accommodate it; the E.F.L. Cup stubbornly complicit in its own demise. It is a winter break that is not really a winter break, a change that is not really change. Everyone gets what they want, and nobody does. It is soccer’s answer to that classic British compromise, the constitutional monarchy.

It has, it should be admitted, just about worked (like constitutional monarchy). The main flaw, really, is that it is a month or so too late. The players needed a break after those dizzying few weeks of constant games over the holidays; a spate of hamstring injuries proved as much. The uneasy peace the current half-a-loaf scheduling solution has brought may hold for a while, but more substantive change — the abolition of the E.F.L. Cup, perhaps, or front-loading Premier League games in the fall — will have to come at some point.

In Case You Missed It

In what can only be described as a seismic shock, the United States women’s team has qualified for the Olympics. Much more interesting is what comes next, as Vlatko Andonovski has to whittle down his squad not to 23, as it would be for the World Cup, but to 18. Some big names have already fallen by the wayside; some even bigger ones may yet join them. It will be “cutthroat,” Carli Lloyd said, in such a way that you maybe think she is looking forward to it.

And after a few months of reporting, together with my colleagues Tariq Panja and Kevin Draper, we produced this piece on the Premier League’s yearlong search for a new chief executive. It is not necessarily a position that inspires fascination, but the story behind the eventual appointment of Richard Masters is a significant one in understanding the league’s direction.

The Premier League has always operated as a collective, with all 20 teams equals when it comes to making decisions off the field. That compromise may not hold for much longer, and that tension comes at a dangerous time, when the world’s pre-eminent domestic league must find a way to cope with a shifting media landscape. Its competitors — especially in Germany and Spain — seem to be innovating rather better, at this point, while the Premier League is consumed by competing internal agendas.

Well, it turns out that writing about Neymar certainly stirs the emotions. A flood of emails and tweets this week, and even some particularly investigative fans (of Neymar, not me) searching out my Instagram — last updated: August 2019 — to leave disparaging comments on pictures of dogs (about me, not the dogs).

An email from Mazuba (I think, they didn’t leave a name), summed up the majority of the response. I’ve edited it a little, for length: “You base his failure at P.S.G. on him not being a factor in the Ballon d’Or [but] they are very much a popularity contest. You also overlooked the fact that he was injured at the business end of the season for the last two seasons. You can tell you don’t really watch the French league, because if you did, you would know that Neymar is P.S.G.’s best player. Neymar’s creativity and daring is what creates most of the opportunities and space that the team generates.”

I agree, of course, that the Ballon d’Or is a strange gauge, but it is — and this was the thrust of last week’s column — Neymar’s own gauge. He wants to win one. The injuries are a perfectly valid point, but I wonder if, in moving to a club whose whole season rests on a handful of games in March and April, he is a little more at the mercy of poor fortune. If he is injured in the spring in Paris, the whole season is rendered pointless. That isn’t true (quite) at Barcelona, say.

Paul Skwiot and Sam Reynolds also got in touch to question my assertion that Lionel Messi is the finest player in history. “The entire nation of Brazil disagrees with you,” Paul wrote. Sam, meanwhile, would rather I went with “one of the finest.” “Ronaldo is smashing records at his fourth team,” she wrote. “It is not just Messi’s world: he also lives in Cristiano’s.” It would be very dull indeed if we all agreed on this subject.

That’s all for this week. If you like defacing pictures of dogs with unrelated criticism, fill your boots here. I’ll see all but the most foul-mouthed comments you make on Twitter, and keep the messages coming to askrory@nytimes.com. Oh, and there’s the podcast, and the sign-up link to send your friends and enemies.

Have a great weekend.