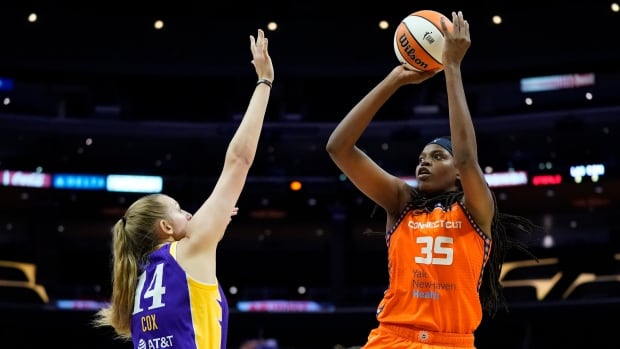 Jonquel Jones had 21 points and 14 rebounds, and the Connecticut Sun beat the Los Angeles Sparks 75-57 on Thursday night to secure a double bye to the semifinals of the WNBA playoffs.

Connecticut (23-6) won its 11th straight game, having not lost since the season resumed from the Olympic break. The Sun sit atop the standings, two games ahead of Las Vegas with three games to play, and need one win in their final three games to secure the top seed.

Brionna Jones added 15 points for Connecticut. DeWanna Bonner had 11 points and Jasmine Thomas scored 10. The Sun host Phoenix on Saturday followed by road trips to New York and Atlanta before the playoffs start on September 23.

Connecticut started the game on a 17-0 run, and Jonquel Jones secured a double-double by halftime with 17 points and 10 rebounds. The Sun led 45-28 at the break.

Nneka Ogwumike and Nia Coffey each scored 12 points for Los Angeles (10-19), which fell into 10th place in the standings. The Sparks are a game behind New York for the final playoff spot. Erica Wheeler added 10 points. The Sparks were 9 of 11 from the stripe compared to Connecticut’s 26 for 29.