The N.B.A. Is Not Very Fun Right Now 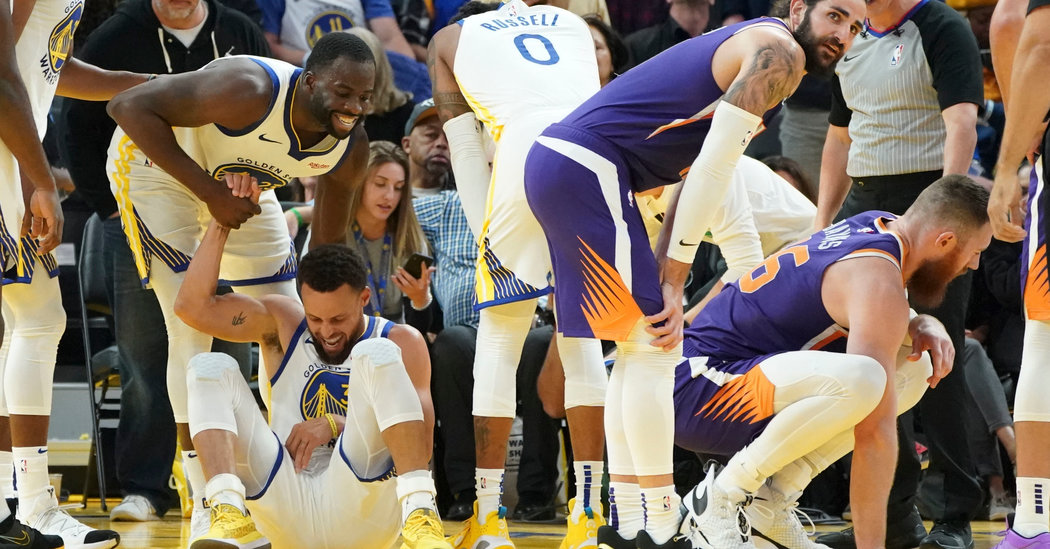 The Golden State Warriors really wanted to believe that things were dribbling back to normalcy.

After a comfortable victory on Monday in New Orleans over the Pelicans in which they never trailed and improved to 23-0 when Draymond Green records a triple-double, Stephen Curry was the last Warrior to depart the visitors’ locker room — as usual.

The Pelicans had placed in Curry’s stall an oversize bag of popcorn, his favorite snack, as they always do. When Curry finally sauntered toward the exit, Ralph Walker, his longtime security attaché, dutifully toted the bag onto the team bus for a triumphant Curry and Co. to enjoy on the flight back to the Bay Area.

Less than 48 hours later, of course, Golden State was plunged right back into early season despair with the news that Curry would be out for three months after breaking his hand.

It turns out that not even the Warriors — not even after five consecutive trips to the N.B.A. finals — were safe from getting ensnared in the swirl of gloom that so regularly infringed upon the league throughout the month of October.

This is supposed to be a season of bountiful promise and intrigue after the most frantic off-season in N.B.A. history in terms of marquee players switching teams. Instead, we’ve been treated to a succession of somber headlines and dour debate topics that, for #thisleague, turned Halloween into a celebration of October’s passing as much as anything.

The N.B.A.’s ongoing China conflict, and uncertainty about how to navigate the tricky nexus of sports, politics and human rights amid fears of significant revenue losses, remains the foremost culprit. Zion Williamson’s knee surgery before his first official game as a pro was an even more tangible downer after his tremendous preseason for New Orleans. A shocking 0-5 start for the Sacramento Kings, after they played in the league’s first-ever exhibitions in faraway India, has quickly endangered a campaign that was supposed to bring a halt to the league’s longest playoff drought (13 seasons and counting).

Injuries have been frequent, too, to stars such as Blake Griffin, Jrue Holiday, Trae Young, Myles Turner and now Curry.

Even some of the feel-good stories in the season’s first two weeks have been blemished by downbeat disclaimers. The Suns, for example, are off to a surprising 3-2 start, but they have also lost Deandre Ayton, their cornerstone center, to a 25-game suspension for taking a banned diuretic.

The Philadelphia 76ers are the N.B.A.’s last remaining unbeaten team at 4-0, but they just watched their star center Joel Embiid incur a two-game suspension for a scuffle on Wednesday night with Minnesota’s Karl-Anthony Towns. The same punishment was given to Towns, sidelining the Timberwolves’ center amid the most well-rounded and dominant offensive stretch of his career.

The altercation itself was sufficiently dangerous, but the unseemly social media back-and-forth that followed was uglier. This will go down, then, as the second straight season to feature a fight uncharacteristically early in the schedule that drew curiously soft penalties from the league office; remember Rajon Rondo vs. Chris Paul in LeBron James’s first home game as a Laker last season?

Which brings us back to Curry, whose injury in just the second game at the gleaming new Chase Center in San Francisco makes Green the only remaining member of Golden State’s championship core who is not seriously injured.

Adding to the insult of it all: It was Stephen Curry Popcorn Bobblehead Night. Then Under Armour released Curry’s new signature shoe on Friday — the same day he had surgery that will sideline him at least until February.

In the Warriors’ case of gloom, though, you can spot some silver linings. Curry, for starters, did not injure his shooting hand. And his team, as covered extensively in our latest weekly newsletter, still has an enviable future to consider despite Kevin Durant’s free-agency defection to the Nets. Ready or not, Golden State will be forced to laser in on that future in earnest with Curry sidelined.

With Klay Thompson also possibly out for the entire season after knee surgery, losing Curry for an extended period seems certain to nudge Golden State to further prioritize draft position and youth development in the unforgiving West — no matter how much their plight irks the Warriors’ ever-hungry and staunchly anti-tanking team owner Joe Lacob.

Yet the league’s other recent crises aren’t so easily managed. From the complicated new reality of doing business in China after an inflammatory tweet about Hong Kong from Houston Rockets General Manager Daryl Morey, to New Orleans’ ongoing challenges in maintaining Williamson’s health given his gargantuan 6-foot-6, 284-pound frame, this has been a dispiriting launch that no one anticipated.

It was supposed to be a different kind of season, one refreshingly focused on the present — meaning the actual games rather than the future for once. The past several seasons have been overshadowed by breathless (and constant) speculation about soon-to-be free agents, from Durant three years ago to LeBron two years ago to Anthony Davis, Durant and Kyrie Irving a season ago. But the 2020 free-agent class currently features no certifiable franchise players.

This was to be the season that the most wide-open title race in years, after all the big free-agent signings and trades, would be the focus. So far? No such luxury.

One can only hope that, perhaps come Thanksgiving, the N.B.A.’s present will have rebounded with the joyous season we were promised.