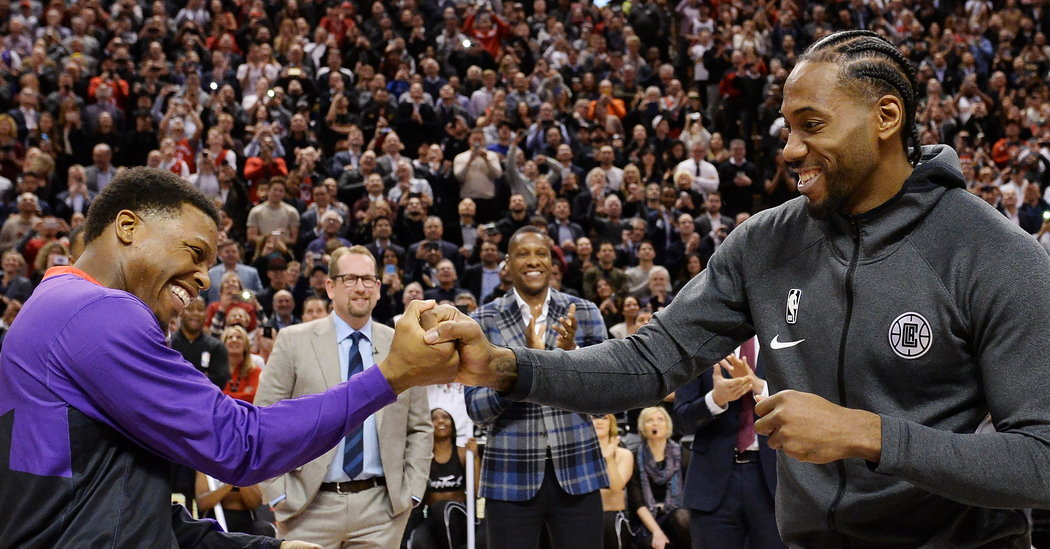 TORONTO — No one in N.B.A. history had ever led his team to a championship the way Kawhi Leonard did with the Toronto Raptors and then picked a new team 23 days later.

Yet no one before Leonard had ever sat out 22 games under the injury-prevention heading of load management — while publicly dismissing the regular season as “just practices” — and then made a case to be known as the best player in the world by the time the playoffs were finished.

It is the totality of those myriad firsts that set up Leonard to collect a championship ring in a manner we’ve never before seen before. He returned to Canada on Wednesday night as a member of the Los Angeles Clippers and, despite choosing to leave the Raptors in record time, found waves of adoration rather than scorn to go with the new jewelry.

There were chants of “M-V-P! M-V-P!” by the time Leonard was finished saluting the Scotiabank Arena crowd in a brief pregame ceremony — and no one was surprised even after the uncomfortable returns that greeted the likes of Vince Carter, Tracy McGrady and Chris Bosh here. Consider it the latest chapter in Leonard’s one-of-a-kind story.

Over and over and over, Leonard does things the N.B.A. has never seen.

“I don’t know if he promised a championship, but he fulfilled it anyway,” Clippers Coach Doc Rivers said.

“It wasn’t even about tonight,” Leonard said after the Clippers’ 112-92 victory, explaining that Raptors fans “already did a great job last year” convincing him of their eternal support.

“Still love the city,” Leonard added, before exiting the building to join his former Raptors teammate Kyle Lowry and Lowry’s wife for a postgame dinner.

Any notion that Leonard would be treated as some sort of Public Enemy No. 2 in Canada was probably washed away in October, when he was warmly received at a Clippers exhibition game in Vancouver. Leonard told the story that night of the numerous Canadians who had approached him during the summer, wherever they found him, and thanked for him the championship he delivered — and the inferiority complex he erased.

Torontonians, though, still managed to exceed expectations with their warmth for Leonard, the first N.B.A. finals most valuable player to switch teams in the off-season after he won the award. In stark contrast to the icy reception that awaited Leonard in January, when he appeared in San Antonio for the first time as a visiting player and was booed buzzer to buzzer, he was treated to a robust video tribute and standing ovation after he was introduced separately from the other four Clippers starters and Rivers in his return to Toronto.

The most negativity Leonard faced were gasps whenever he hurt the home team. Make that gasps or outright silence — Leonard noticeably hushed the audience with a straightaway 3-pointer with 1 minute 40 seconds left in the third quarter to push the Clippers’ lead back to 12 points after the Raptors had sliced an earlier 20-point deficit to 5.

With Paul George missing 10 of his 12 3-point attempts and Patrick Beverley knocked out of the game by a concussion, a patient Leonard was Los Angeles’ steadying force against Toronto’s defensive swarms. He finished with a no-frills 23 points, 6 assists and 5 rebounds to lead the 19-7 Clippers, who are gradually closing in on the 22-3 Lakers as the Staples Center co-tenants’ Christmas Day showdown draws near.

“I’m happy he’s on my side now,” said the Clippers’ Lou Williams, another former one-season Raptor, who was also treated to a tribute video on Wednesday.

The louder questions, as tipoff approached, focused as much on Leonard’s reaction as the crowd’s. As in: Would a moment like this move Leonard to shed his trusty man-of-no-words exterior and make this one of those occasions when he betrays some emotion?

It definitely didn’t look that way judging from the fake tears Leonard laughingly wiped away as his buddy Lowry handed him the ring encrusted with 650 diamonds. Yet Rivers insisted that Leonard is often misread by the public.

“You really don’t know what’s going on inside,” Rivers said. “There could be a fire drill in there as far as we know. But I think he enjoys things more than you’ll ever know.

“I played with a guy, Patrick Ewing, who was a poker-face guy. But the more you were around him, you actually knew that some of the things did affect him, and mostly in a good way.”

Easier to detect was the fact that Wednesday’s backdrop, like the returning basketball hero himself, was also one of a kind. The veteran forward Patrick Patterson, yet another former Raptor-turned-Clipper, explained the special mentality of basketball fans in this part of the world.

“They used to say this was the team nobody wants to play for, how it’s so cold, how hockey rules over all,” Patterson said. “If you play here and you play with heart and passion, they will always appreciate you.

“The fans, instead of a city, you’ve got a whole country rooting for you — and every Canadian around the world. Nobody else in the N.B.A. has that. For Kawhi to come in here and win a championship, I knew the fans would welcome him back with open arms.”

My former ESPN colleague J.A. Adande made the great point this week that Leonard’s case is so notable because he — the most impactful player in franchise history — had such a short Toronto tenure. An illustration: The go-to debate on Toronto sports-talk radio all week centered on how long the Raptors should wait before retiring his No. 2 — and then how long they should wait before erecting a Leonard statue outside of Scotiabank Arena.

Including the playoffs, remember, Leonard played only 84 games as a Raptor.

That’s what last season’s championship has done to Toronto. And this was the sort of evening that had to please Masai Ujiri, Toronto’s president of basketball operations, almost as much as Leonard.

Patterson described Leonard as someone “who did something for Toronto that nobody has ever done before.” The same holds for Ujiri, the team president who had the temerity and the constitution to coldly trade the beloved DeMar DeRozan to San Antonio to acquire a transformative superstar when Leonard had only one year left on his contract.

Ujiri’s gamble to trade for Leonard after Toronto’s countless playoff disappointments, knowing full well he could bolt almost immediately, was as integral to the Raptors’ title run as anything. Leonard did bolt, of course, but one suspects that the locals will forgive Ujiri, too, if he decides to leave someday to try to come save the Knicks.

That solitary championship was so powerful, based on this week’s evidence, it appears even the architect would be granted the same immunity.