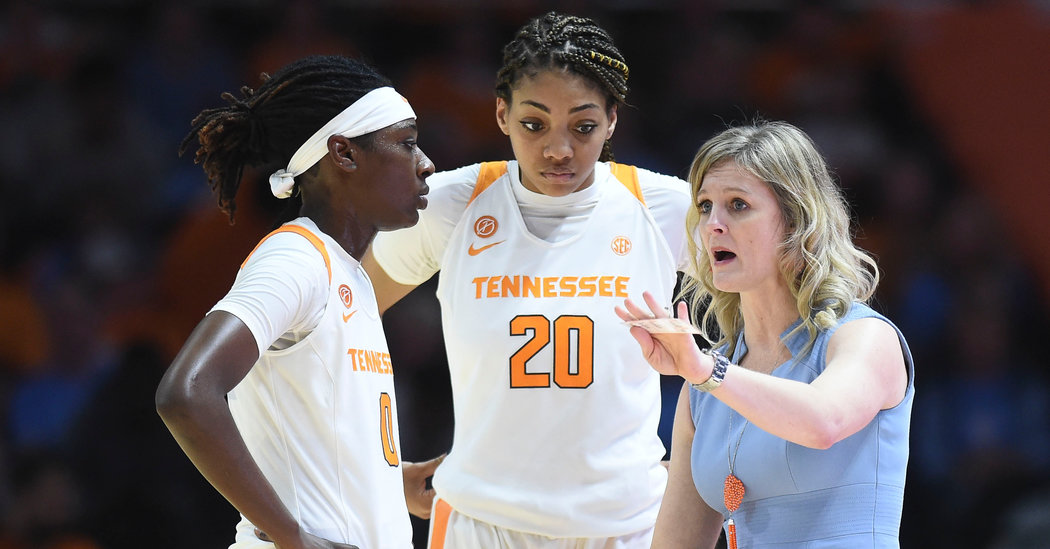 It would have been difficult to predict more than two decades ago that Kellie Harper would one day carry on the famous but erstwhile college basketball rivalry that Pat Summitt, her late mentor at Tennessee, unceremoniously canceled.

Yet in hindsight, it made perfect sense that when Tennessee arrived in Hartford to play Connecticut on Thursday night for the first time in 13 years, it was with Harper as the sideline counterpart to UConn Coach Geno Auriemma, whose contention with Summitt had fueled the rivalry.

In the early spring of 1997, there was no higher women’s basketball authority and achiever than Summitt. At the Final Four that season in Cincinnati, no Tennessee player better embodied her steely temperament and tenacity than Harper, then a sophomore point guard whose birth surname was Jolly.

Obscured by the stardom of Chamique Holdsclaw, Jolly’s 19 points and deft ball-handling helped take down Auriemma and UConn in the national semifinals, when medical logic dictated that she should not have played. Six months earlier, she had torn the anterior cruciate ligament in her right knee for a second time, but ignored the advice from her doctors to write off the season with a redshirt. Instead, she was back on the court within four months.

“Wanna see my scar?” she drawled after the semifinal, pointing to the ice pack on her knee, when I asked about her near-miracle recovery. No male player had ever made such an offer. Covering my first women’s Final Four, I was charmed and hooked (enough to return for 18 of the next 19).

Jolly was not finished with her weekend’s work. In the final against Old Dominion, she had 11 assists, five steals and three slick late assists to Holdsclaw to secure Summitt’s seventh title (of eight over all).

I wondered in a column that night why Wendy Larry, Old Dominion’s coach, had not directly challenged Jolly at the point of attack with her aggressive, all-American guard, Ticha Penicheiro. Could it have been that Jolly didn’t appear all that formidable, with her braided blond hair, average speed and old-school push shot?

In an emerging era of improved athletes, was she too easy to underestimate?

Something tells me Auriemma won’t make that mistake if the renewal of the Tennessee-Connecticut series, which once highlighted and practically defined the women’s college season, is extended beyond the current two-year deal. That’s also a mighty big “if” given that Auriemma launched a verbal grenade at the Lady Vols’ program in November, a kind of retrograde taunt of the kind that had contributed to the rivalry’s discontinuation in the first place.

Summitt was never comfortable verbally jousting with the ever-needling Auriemma. She also became wary of the recruiting tactics by UConn, reportedly related to Maya Moore during the 2006-7 season, and promptly ended the regular-season series.

Tennessee won titles that season and next, but Summitt retired at 59 years old in 2012 with early onset Alzheimer’s, and died in 2016. Not playing UConn didn’t help the women’s game or Tennessee, but the loss of Summitt was crushing. Her storied program, under the leadership of Holly Warlick, a longtime Summitt assistant, declined in national and even Southeastern Conference prominence.

Auriemma continued hauling national championship trophies, 11 in all, back to Storrs, Conn. — though none since the graduation of Breanna Stewart in 2016, when he also nabbed his first recruit from Tennessee, the now-senior point guard, Crystal Dangerfield.

As if losing a homegrown high school star wasn’t humbling enough, Tennessee also watched Evina Westbrook — one of its two best players last season — transfer to UConn after a first-round defeat in the N.C.A.A. tournament. That loss resulted in the firing of Warlick, who in 2018 had agreed to the two-year resumption of the UConn series. The main attraction, she explained, was that proceeds, in part, would benefit the Alzheimer’s foundation that carried Summitt’s name.

But it was Auriemma who fumed in November after Westbrook’s bid for a waiver of the one-season ineligibility rule was denied by the N.C.A.A. He also lashed out at Tennessee, alleging that it hadn’t been forthcoming enough with the N.C.A.A. about the environment for Westbrook in Warlick’s program last season, describing it as one “you would not want your kid in.”

Phillip Fulmer, Tennessee’s athletic director, took issue with the vague but piercing charge, as did Warlick, who admitted to problems but called Auriemma’s assertion that Tennessee was to blame for Westbrook’s failure to get a waiver “kind of crazy.”

But with the rivalry seemingly reignited, on cue for a homecoming, Auriemma wondered out loud why everyone was making “such a big deal” about UConn playing Tennessee again.

“You know, everything’s like a Broadway show,” he recently told reporters. “It has its run, and then it’s got to end. And it ended, and I don’t know that you’re going to get that back, and I think college basketball is doing pretty damn good without it.”

Even lacking a national title, Auriemma’s program has still consistently ranked at or near the top in recent years, while Tennessee has struggled to hang on in the Associated Press Top 25. New rivals have filled the vacuum left by Tennessee on UConn’s schedule, especially Notre Dame and Baylor. Other programs have challenged for national prominence — South Carolina, Mississippi State, Louisville, Oregon.

Newly hired from Missouri State, Harper scored an early victory when she made a hasty visit to Ohio last spring to hold on to Jordan Horston, a highly recruited guard who had chosen Tennessee over UConn before Warlick was dismissed. But the Lady Vols have a long way back to the level of the Huskies, who, in addition to Westbrook, have signed their best recruiting class in years for next season.

Be it the resumption of a once-fierce rivalry or a mere nostalgic reunion, don’t expect Harper to relish engaging with Auriemma any more than Summitt did. She hails from Sparta, Tenn., a town of roughly 5,000 people between Nashville and Knoxville. If she was wounded by Auriemma’s heated rhetoric, she hasn’t publicly shown her figurative scar, taking exception only with the notion that Tennessee is now “just another program.”

She added, wryly, “Geno is a very good coach, and he’s a clever coach as well.”

Which gets you to thinking: Has Auriemma been dismissing the renewal of the rivalry in order to promote it? That wouldn’t be unlike his unique and successful brand of salesmanship.