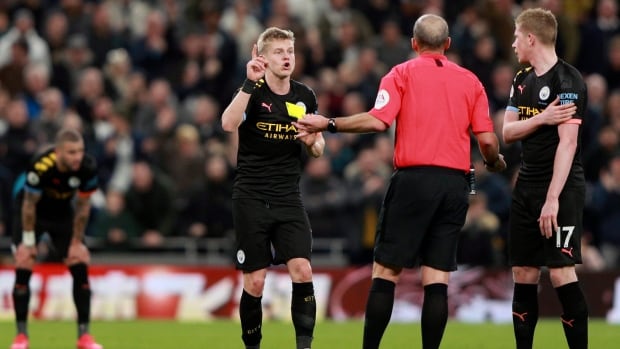 English Premier League champion Manchester City was banned by UEFA from the Champions League for two seasons on Friday for “serious breaches” of spending rules in a seismic ruling against one of world football’s wealthiest clubs.

The Abu Dhabi-owned team was also fined $33 million US after an investigation that was sparked by leaks showing City overstated sponsorship revenue in a bid to comply with Financial Fair Play regulations.

The punishment prevents City from playing in any European competition, including the Europa League, until the 2022-23 season. It could have a significant impact on the club’s ability to sign players and retain manager Pep Guardiola, whose contract expires next season.

“The adjudicatory chamber, having considered all the evidence, has found that Manchester City Football Club committed serious breaches of the UEFA club licensing and financial fair play regulations by overstating its sponsorship revenue in its accounts and in the break-even information submitted to UEFA between 2012 and 2016,” UEFA said in a statement.

City plays Real Madrid in the Champions League round of 16 this month but would not get to defend the title if it lifts the European Cup for the first time.

City said it would appeal against the sanctions, criticizing a “flawed” process.

“This is a case initiated by UEFA, prosecuted by UEFA and judged by UEFA,” the club said. “With this prejudicial process now over, the club will pursue an impartial judgment as quickly as possible and will therefore, in the first instance, commence proceedings with the Court of Arbitration for Sport at the earliest opportunity.”

City has never disputed the authenticity of the information contained in internal emails that were published by German media outlet Der Spiegel in October 2018 and shows alleged schemes by the club to allegedly cover up the true source of income in a bid to comply with FFP.

In 2015, Der Spiegel said emails were being sent internally at City showing the manipulation of sponsorship revue from Etihad Airways, the state-owned airline from Abu Dhabi, which is the naming rights sponsor of City’s stadium and training campus as well as appearing on jerseys.

The sponsorship was said to generate about $85 million annually for City. But City’s holding company — the state-backed Abu Dhabi United Group — channeled 59.9 million pounds back to Etihad, according to Jorge Chumillas, the club’s chief financial officer, in an internal email to club director Simon Pearce.

The leaks showed how City allegedly tried to artificially raise its revenue, in one case by 33 million, according to emails from 2013 reported by Der Spiegel. Abu Dhabi United Group was alleged to be sending cash to a shell vehicle which was created to supposedly buy the right to use players’ images in marketing campaigns.

There were further examples that Sheikh Mansour could have been the source of sponsorship revenue for Abu Dhabi state-owned companies like investment firm Aabar. Der Spiegel cited a 2010 email to Aabar from Pearce, the City director who also works for Abu Dhabi’s Executive Affairs Authority.

“As we discussed, the annual direct obligation for Aabar is GBP 3 million,” Pearce wrote. “The remaining 12 million GBP requirement will come from alternative sources provided by His Highness.”

Club has been punished before

City has already been punished by UEFA for violating FFP, striking an agreement in 2014 that saw the team fined rather than banned from the Champions League for inflated sponsorship deals with companies linked to the club or its ownership.

A leaked 2014 email from City lawyer Simon Cliff to a colleague showed the death of UEFA’s lead FFP investigator being celebrated: “1 down, 6 to go.”

Since July 2011, UEFA has monitored the accounts of all clubs entering its two club competitions in a bid to curb unfettered spending on players regardless of the owners’ wealth.

The first period UEFA assessed clubs for compliance with FFP was 2011-13, when owners were allowed to cover losses up to 45 million euros.

City has been transformed into an English soccer power in the decade since being bought by Sheikh Mansour bin Zayed Al Nahyan, a deputy prime minister of the United Arab Emirates and a member of Abu Dhabi’s royal family, winning the Premier League four times since 2012. City has endured a problematic title defence on the field, sitting second in the Premier League 22 points behind Liverpool.

The City Football Group, of which City is the key component, was valued at $4.8 billion in November after U.S. private equity firm Silver Lake bought a stake of around 10% for $500 million. Silver Lake became the second major partner in the group, with a Chinese consortium owning 12% of the equity. There are partner clubs in New York, Melbourne and Yokohama, among others.

Questions have been raised about how the leaks were obtained that now cast a shadow on the reputation of City.

A Portuguese man, Rui Pinto, has been implicated in the obtaining of damaging information about European football. Pinto’s lawyer, Francisco Teixeira da Mota, said his client has been helping law enforcement in other European countries with investigations into their clubs’ finances.

Pinto was extradited last year to Portugal from Hungary, where he had lived since 2015, after Portuguese police investigations concluded he hacked into computers in his home country. He has been held in detention in Portugal since March.

A Portuguese judge ruled last month that prosecutors have enough evidence incriminating Pinto for him to stand trial. Pinto is accused of attempted extortion and hacking into secret information held by Sporting Lisbon and the Portuguese soccer federation, including financial dealings.