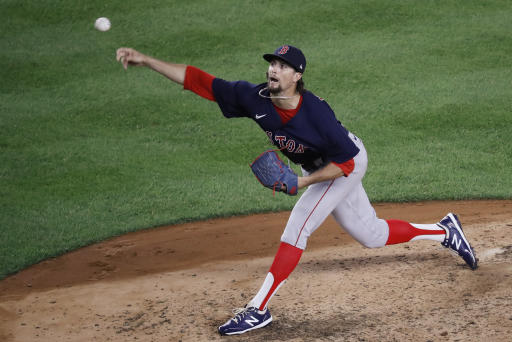 Yankees starter Masahiro Tanaka made his season debut after recovering from a concussion sustained when he was hit in the head by Giancarlo Stanton‘s line drive during practice on July 4. Tanaka lasted just 2 2/3 innings and 51 pitches, tiring in his second time through the order.

Xander Bogaerts chased Tanaka with an RBI double, and a second run scored on the play when shortstop Gleyber Torres dropped a throw from the outfield for an error.

Left-hander Luis Avilan followed and got four straight outs, and Nelson entered to start the fifth. A 24-year-old right-hander who pitched at three minor league levels last year, Nelson started with a three-pitch strikeout of Tzu-Wei Lin. He threw at up to 97.8 mph with four strikeouts and two walks.

David Hale finished the six-hitter for his third career save, his first this year.

Judge homered in the first inning off Zack Godley (0-1), a 455-foot drive to left-center. Urshela hit his second homer of the season an inning later for a 5-0 lead, following three straight singles with a fly into the netting above Monument Park. The Yankees’ first 10 runs of the series all scored on homers.

Urshela also made a sparking defensive play at third base in the sixth, snagging Christian Vazquez’s grounder, steadying in foul territory and throwing on the fly to first to beat the slow-footed catcher.

Gary Sanchez reached ahead of Urshela’s homer with a single, his first hit following an 0 for 15 start.

Mike Tauchman, starting while Aaron Hicks got a night off, had three hits after an 0 for 5 start,

Red Sox left fielder Andrew Benintendi was back in the lineup after a night off. He went 0 for 3 with a pair of walks, dropping to a 2-for-24 start (.083).

Boston left-handed batters were 0 for 16 before Rafael Devers singled off Hale in the eighth, just the sixth hit for Devers in 33 at-bats this season.

After opening at home and going to Citi Field and Yankee Stadium, Boston intends to travel to Florida after Sunday night’s game for a series at Tampa Bay starting Tuesday.

Red Sox chief baseball officer Chaim Bloom is looking at the trade market despite the uncertainty caused by the novel coronavirus.

”You have to plan for a complete season,” he said. ”We know that that is not a sure thing.”

J.D. Martinez was out of the Boston starting lineup after starting 7 for 37 (.219) with no homers and three RBIs. ”I’m hoping by doing this that maybe we’ll get the next two months that’ll be really good from him,” manager Ron Roenicke said. New prohibitions on in-game use of video could be a factor. ”It probably affects J.D. a little more than anybody because he uses video more than anybody,” Roenicke said. ”He’s one of the few guys, a few players that in game can look at a video to see what he is doing wrong and correct.”

Yankees: RHP Luis Cessa (COVID-19) pitched two innings of batting practice before the game, and New York manager Aaron Boone expects he will be activated in the next few days.

LHP James Paxton (0-1) starts Sunday’s series finale after averaging 92 mph with his fastball in his opening start at Washington, down from nearly 96 mph last year. Paxton had back surgery in February. ”My arm angle was low. I was kind of bending over too far my way on my way to the plate. So I’ve been working on my posture, standing up a little bit straighter,” he said.

What time and channel is the Loudon NASCAR race today?

What does Arsenal’s FA Cup victory mean for European qualification?

Odell Beckham Jr.: I’m Relaxed With the Idea I Might Not Be Playing

Trash Talkin’ Tuesday: Sammy Watkins What Are You Thinking? [Video]