Virginia Is the National Champion. But It Can’t Seem to Make a Shot 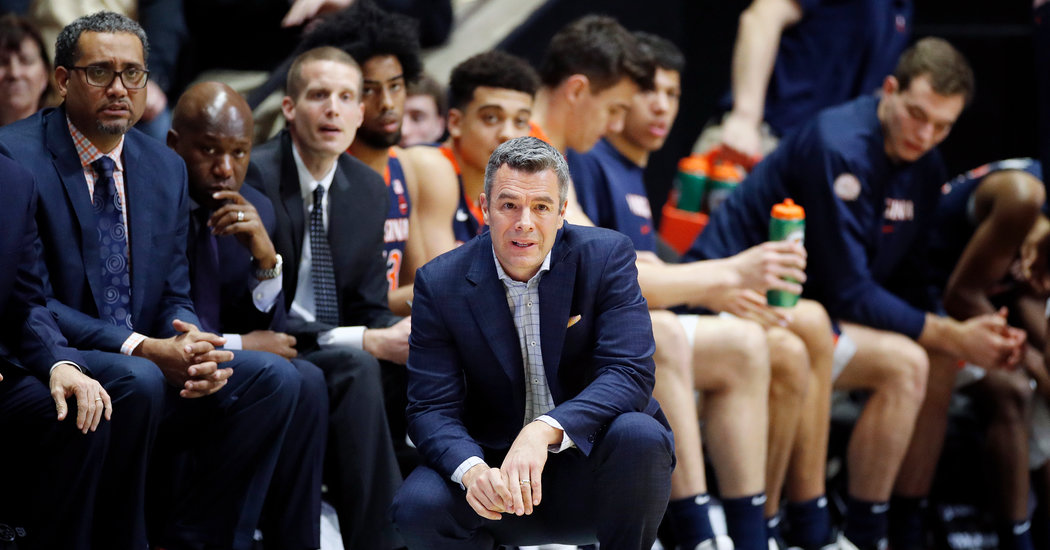 The Virginia men’s basketball team, for a decade under Coach Tony Bennett, has had a methodical offense, playing at the slowest pace in the country for the last five seasons. But despite that style, the team has always been able to score.

Last season, it scored 116 points per 100 possessions, fourth best in the country. That scoring and the team’s traditionally smothering defense led it to the national championship in April, one year after an embarrassing exit from the N.C.A.A. tournament as the first top seed to lose to a No. 16 seed in the first round.

Now, Virginia is again playing at the slowest pace in Division I. But its offense has disappeared. The team’s points per 100 possessions has declined to an appalling 88.9, ranked 327th in the country.

It would seem to be impossible to win with an offense that inefficient. Last season, none of the 64 teams averaging 99 points or less made the N.C.A.A. tournament, and the teams around the 88.9 mark put up records like 5-27 and 3-29.

But so far, Virginia has managed to mostly hide its offensive shortcomings. Its defense, fabulous as usual — it held Maine to 26 points — led it to a 7-0 start and a No. 5 ranking in The Associated Press Top 25 poll.

Then Purdue, which lost to Virginia in the regional final last season, came to town on Wednesday night. The Boilermakers exposed Virginia with a 69-40 rout. For the first time since the national title last spring, Cavaliers fans might have started to realize that this was a new and perhaps significantly inferior team.

Virginia is shooting 40.2 percent, ranking 307th in the country. But its 3-point percentage is the real killer: 23.8 percent. That ranks 349th out of 353 teams, barely ahead of the likes of Florida A&M and Kennesaw State. In the telling Purdue loss, the team was 4 of 24 on 3-pointers.

Among the poor performers from beyond the arc are two freshman, Casey Morsell (4-36) and Thomas Woldetensae (3-21), and a sophomore, Kody Stattman (1-14).

Senior swingman Braxton Key, who averages 10 points a game, missed the Purdue matchup with a wrist injury, but he is shooting a not-much-better 23.5 percent from on 3s.

Throw in a decline in assists (on 46 percent of buckets this season, down from 56 percent) and more turnovers (18 per 100 plays, versus 13) and you have a team whose 7-1 record looks extremely shaky.

It hasn’t helped that the team lost three players to the N.B.A. draft, including De’Andre Hunter, who was selected No. 4 over all. All three of those players shot significantly better from outside. Restocking wasn’t a breeze. Despite the national title, Virginia managed to land none of the top 50 recruits ranked by 247 Sports.

Virginia is also struggling in an often overlooked category: getting to the free throw line. Last season, the team wasn’t especially great at it, but this year it is downright horrible, getting to the line just 0.14 times for each field goal attempt. That’s the 15th worst rate in the country.

Virginia has its biggest game of the year this Sunday at home against North Carolina. Optimists would say that Virginia can’t stay cold forever, that its outside shots must start to fall. This Sunday would be a good time for that to start.