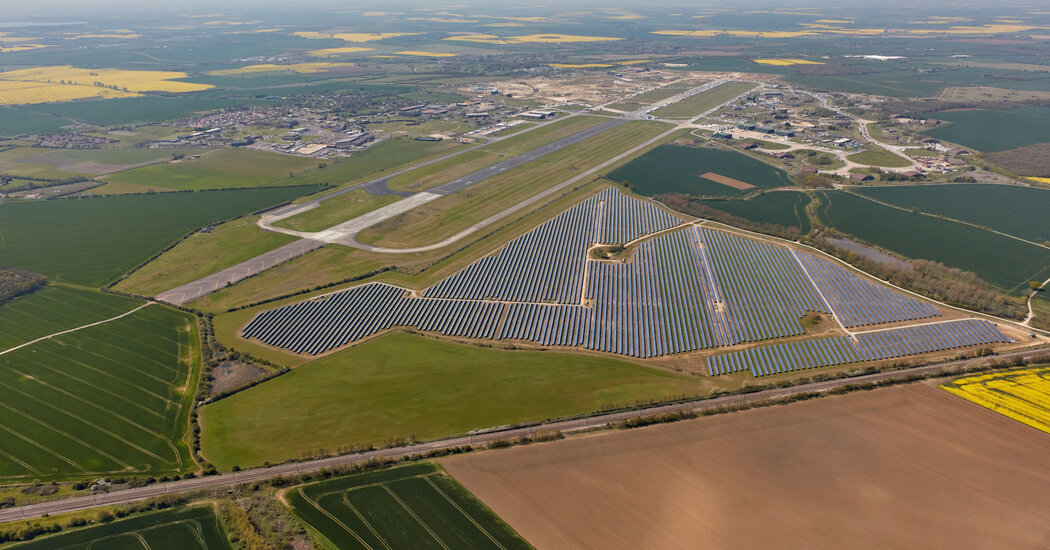 BP reported a $16.8 billion quarterly loss on Tuesday, and cut its dividend in half — the first reduction since the Deepwater Horizon disaster a decade ago.

But what caught the attention of analysts and, apparently, investors, was the ambitious plan that Bernard Looney, the chief executive, set out for making over the London-based oil giant into a diversified purveyor of cleaner energy within a decade. BP’s share price jumped by more than 7 percent during trading Tuesday.

On a webcast with analysts Mr. Looney described a transformation plan that Stuart Joyner, an analyst at the market research firm Redburn, said in a note to clients was “major, positive, thoughtful and largely unexpected.”

European oil companies, much more that their counterparts in the United States, have made a flurry of commitments to reduce carbon emissions in the future, responding to pressure from investors and governments to be on the right side of tackling climate change.

Mr. Looney, though, was more specific in his investment goals, saying that he intended for BP in a decade to be investing around $5 billion a year in renewable energy like wind, solar and hydrogen, a clean-burning gas, about 10 times the current amount. BP’s capital spending is likely to be about $12 billion this year.

He said that he wanted to reduce oil and gas production by about 40 percent in that time frame. As part of the shift, BP, whose origins date back to the discovery of oil in Iran in the early 20th century, would not enter any new countries to explore for oil and would also pare back its refining by about one-third, Mr. Looney said.

Other large oil companies have been wary of saying that their petroleum output would decline despite growing climate change concerns. Now they may come under pressure to do the same.

The ambition to cut oil and gas output is “a massive departure,” said Mr. Joyner of Redburn. “I think it will go down as a watershed moment not only for BP but for the industry,” he added.

Oswald Clint, an analyst at Bernstein, a market research firm, said BP’s plans were “peer-leading” and that its potential to smoothly manage large projects in the renewables area was “underappreciated.”

BP’s second-quarter results were also laden with reminders that the company has made mistakes before and could make them again.

It took a total of $17.4 billion in write downs, an acknowledgment that its oil and gas fields are no longer worth as much as they once were.

BP has aspired to be a different kind of energy company before. In 2000 it adopted the slogan Beyond Petroleum, though early forays into renewable energy lost momentum after the 2010 Deepwater Horizon accident in the Gulf of Mexico.

“There are significant risks for BP” and other large oil companies as they move toward lower-carbon businesses, said Jennifer C. Rowland, an analyst at Edward Jones, a securities broker. “However, the risk of inaction is just as significant, as the value of their traditional oil and gas assets, as well as their relevance in the energy world, could be diminished over time, “ she said.

BP sliced its dividend to $5.25 cents, while saying it would prioritize keeping the still generous payout at that level.

Mr. Looney, a 29-year company veteran, became chief executive in February and promptly set out a target of achieving “net zero” emissions by 2050. On Tuesday he provided some details on meeting that goal that were originally supposed to be revealed in September to impatient investors.

Mr. Looney said the coronavirus pandemic and the grim earnings that it had produced “only makes us more determined to change, not less.”

A key focus of the new BP will be electricity generation, although cash from oil and gas will fund investment. Analysts say that electric power will be the key means for delivering cleaner energy in the future. By 2030 BP plans to have about 50 gigawatts of renewable generating capacity, roughly equivalent to fifteen large modern nuclear power stations.

Mr. Looney says his aim is to profit from renewables through BP’s extensive buying and selling of electricity and by offering cities or companies large amounts of clean energy. The company is optimistic that it can make double-digit profits from such operations. That is more than some analysts say utility-type businesses are likely to produce.

This new direction is coming at a difficult juncture. Mr. Looney said previously that he was cutting about 10,000 jobs, or about 14 percent of the work force, most of them this year, as he creates what he calls a more agile company. This exercise will lead to around $1.5 billion in write downs to be recognized during this year.

Adding to the risks, the company is now looking to buy into areas, such as electricity generation, where Mr. Looney and most of his colleagues have much less experience than they do in oil and gas. Mr. Looney began his career as a drilling engineer, and rose to be head of the unit that discovers and produces petroleum — the source of the billions of dollars in write-offs that were officially announced Tuesday.

“I want to make sure that we don’t have to keep doing this in the future,” Mr. Looney said.

6 of the best vibrators in the UK: The good, the great, and the orgasmic