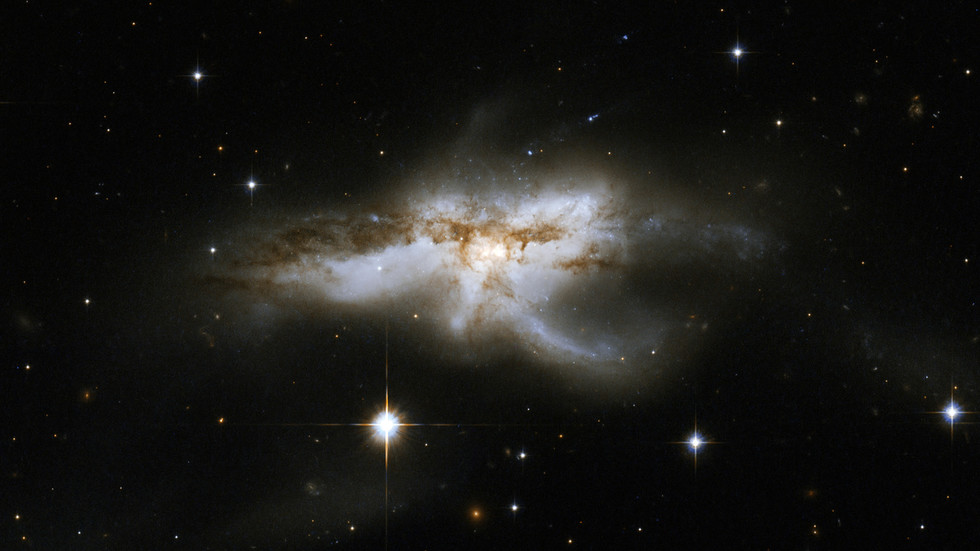 Astronomers studying one of the most peculiarly-shaped galaxies ever discovered say they have found one more supermassive black hole at its core than previously known, indicating that three star systems collided.

The discovery is being hailed as a world-first.

Galaxy NGC 6240 is described by the European Space Agency as “butterfly- or lobster-shaped” and sits relatively close to our Milky Way (cosmically speaking) at a distance of about 400 million lightyears.

According to a new study by an international team of astronomers, the galaxy was thought to house two supermassive black holes but in fact is home to three of the dense matter giants. Neighboring black holes can seriously affect the shape of a galaxy given their intense gravitational pulls.

Also on rt.com Aliens, is that you? Mysterious ‘fireball’ streaks across the sky in Oregon, leaves cops scratching their heads (PHOTOS)

These supermassive black holes will eventually one day merge into a humongous single black hole, but that could take hundreds of millions of years to happen. According to the new research, each of these black holes has about 90 million times the mass of the Sun.

“Up until now, such a concentration of three supermassive black holes had never been discovered in the universe,” said Dr Peter Weilbacher of the Leibniz Institute for Astrophysics Potsdam (AIP).

The team say their research could be crucial in furthering understanding of how the universe developed, and continues to change. The new discovery implies that some of the largest known galaxies formed after a number of smaller galaxies smashed into each other, with their black holes merging more quickly than was the case with other, smaller, systems.