Facebook announces it’s cracking down on both QAnon and Antifa 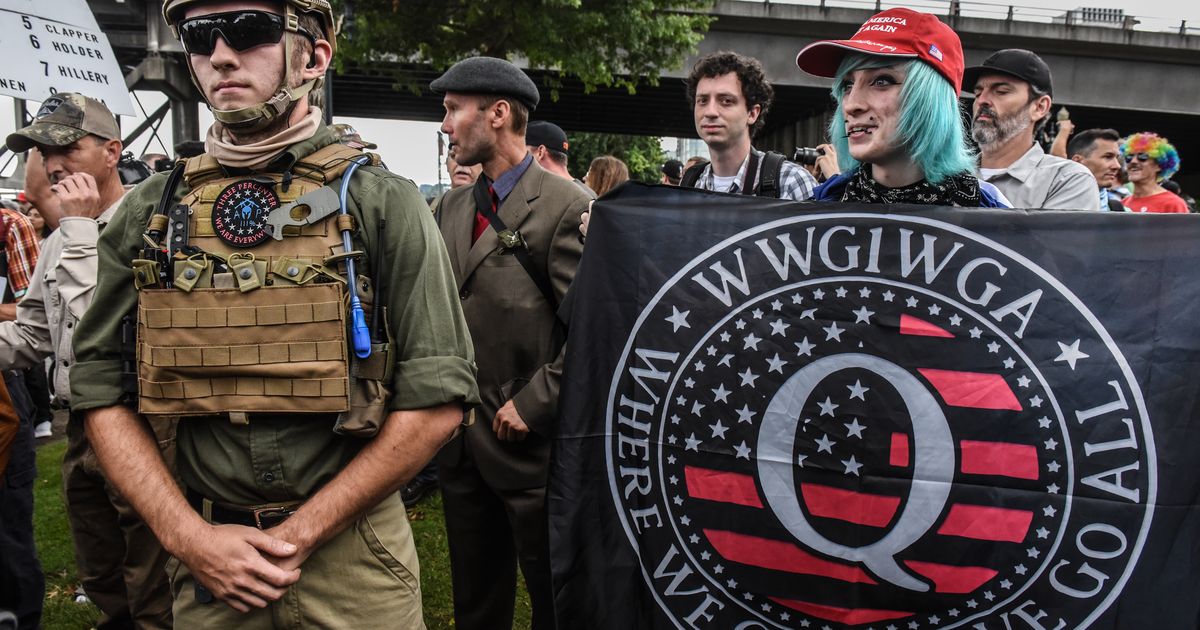 One is a conspiratorial pro-Trump movement that believes Hollywood celebrities and the Democratic Party run a global, satanic child-sex-trafficking ring. The other is a protest movement featuring antifacist activists who sometimes get a bit violent when defending communities, like Charlottesville, Virginia, from white supremacists.

On Wednesday, Facebook announced sweeping new rules on how it will treat pages, groups, and content posted on its platform and on Instagram that promote violence, such as those related to QAnon, US-based militia organizations, and anarchist groups. Facebook says these policies will also affect those “encouraging riots,” which the company says includes those who “may identify as antifa.”

The updates are part of an expansion of the company’s Dangerous Individuals and Organizations policies. Facebook says these groups “do not meet the rigorous criteria” to be outright banned from its platform. However, the new rules will allow the company to take action against specific networks in order to limit the reach, discoverability, and monetization of these groups on its platforms.

As part of its new policy changes, Facebook will now ban pages, groups, and Instagram accounts which discuss or encourage “potential violence” and block these accounts from running advertisements, monetizing their content, selling products, or fundraising on the social media site. The company will also reduce visibility of these accounts and pages in news feeds, recommendations, and platform search results.

In its announcement, Facebook says it will continue to allow individuals to post about or in support of QAnon, antifa, and other groups as long as they don’t violate the company’s other content rules. However these policy changes “will restrict their ability to organize.”

The first actions taken due to these new rules resulted in more than 100 Pages and 790 groups related to the QAnon conspiracy being removed from Facebook. The company also took down 1,500 QAnon ads from the platform and blocked more than 300 hashtags on both Facebook and Instagram.

More than 440 Facebook Pages, 1,950 Groups, and over 10,000 Instagram handles have had the previously mentioned restrictions applied to their accounts, but have not been removed from the platforms.

Facebook also divulged that it had removed more than 980 groups, 520 Pages and 160 ads from the platform related to militia or “those encouraging riots,” which includes antifa. More than 1,400 hashtags related to these groups have also been restricted on Instagram.

This appears to be the largest action taken against QAnon yet by Facebook. The company appears to be taking the far-right conspiracy theory more seriously in recent months. A recent Facebook internal investigation discovered that millions of the platform’s users belong to QAnon groups. In May, the company removed a network of QAnon Pages for faking engagement, which is against company policy. And earlier this month, Facebook banned the second-largest QAnon group from its platform.

As for antifa, the highest-profile account removal related to that movement on a social media platform appears to have occurred in June when Twitter removed an antifacist profile…that turned out to be run by a white supremacist group.

A recent study by the think tank Center for Strategic and International Studies found at least 329 deaths connected to right-wing extremists and white supremacists since 1994. There have been a few deaths over the past couple of years linked specifically to QAnon, as well.

Facebook says it will continue to monitor QAnon- and antifa-related pages and groups as its policy evolves to keep up with these movements.

This BBC Micro Emulator Takes You Back to 1981

PS4’s Share Button Was So Great Everyone Copied It

Stephen Colbert’s ‘Avengers: Endgame’ parody of the RNC is a lot

Why the next presidential debate could totally be on Zoom