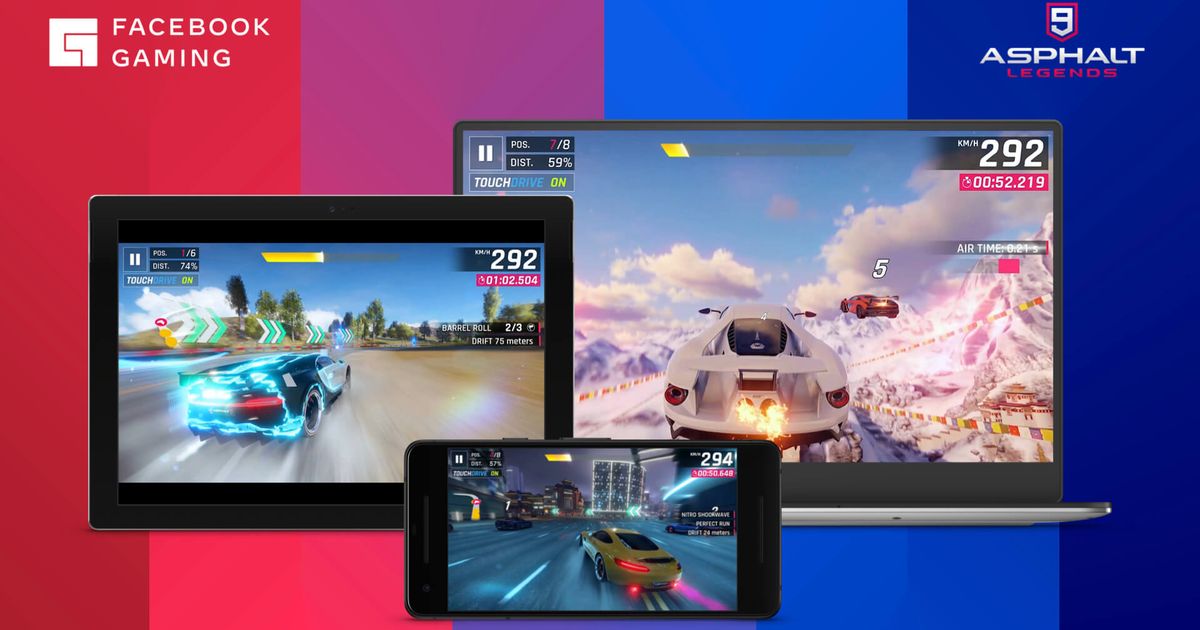 It feels like we’ve been saying this for years (probably because we have), but cloud-based gaming is soon going to have its moment. And Facebook wants in.

The social network is preparing to launch its pseudo-answer to Big Tech competitors like Google Stadia and Amazon Luna, as well as the likes of Microsoft xCloud and PlayStation Now. Facebook Gaming, announced on Monday and arriving in the coming week, will launch its public beta test with just five free-to-play titles.

Those games are: Asphalt 9: Legends, PGA Tour: Golf Shootout, Solitaire: Arthur’s Tale, Mobile Legends: Adventure, and WWE Supercard. In a few weeks, Dirt Bike Unchained will also join the catalog. They’re all mobile releases that will be playable on Facebook, whether it’s through your browser or in the dedicated Facebook and Facebook Gaming apps for Android.

If you’re wondering where iOS is in that mix, it’s not. As Facebook VP of Play Jason Rubin notes in a Monday blog post announcing the news, “[e]ven with Apple’s new cloud games policy, we don’t know if launching on the App Store is a viable path.” Non-Safari mobile browsers may be the answer there, but there’s no official Facebook Gaming support for Apple people at launch.

Facebook has long been a popular destination for gaming among its 2.7 billion users. Rubin’s blog notes that 380 million use the social network to access instant games and web games each month. You might not be playing the latest Call of Duty or Madden on Facebook, but Candy Crush found its audience there. So did FarmVille.

That’s the audience Facebook Gaming is looking to, at least for now. Among the points Rubin’s post lays out is the idea that Facebook “is not trying the replace your favorite gaming hardware.” This is another veiled nod to the likes of Stadia and the yet-to-launch Luna, which both have game libraries aimed at taking on the PlayStations and Xboxes of the world

The beta is starting small, with Facebook Gaming only available in certain parts of the U.S. at first.

“Access to cloud games on Facebook will roll out in the US, initially available across California, Texas and Northeast and Mid-Atlantic states including, Massachusetts, New York, New Jersey, Connecticut, Rhode Island, Delaware, Pennsylvania, Maryland, Washington, D.C., Virginia and West Virginia,” Rubin’s post reads. More locations will be added “in the coming months.”

It’s an unusual moment for mainstream gaming as we march through the closing months of 2020. Microsoft and Sony are about to launch their new consoles, and the former also just staged the public launch of xCloud, the Xbox version of cloud gaming. (Sony’s PlayStation Now has been around for quite a while and it works well, but it hasn’t gotten nearly as much fanfare.)

Between cloud options like those or Stadia, and services like Xbox Game Pass, big and mainstream games are playable on more types of screens now than ever before. Xbox specifically is starting to look more like a service than a hardware platform.

The old ideas around drawing lines between console, PC, and mobile gaming doesn’t apply neatly anymore. Streaming has a lot to do with that, and it’s poised to play an even bigger role in delivering more top-tier games to more people as 5G networks come online and the cost (and value) of mass data delivery over the air evolves.

Facebook Gaming, then, is a planted flag. It’s Facebook saying “hey, we’re here and we’re doing the thing, too.” The games available initially in this beta aren’t necessary going to benefit from cloud streaming in the same way as, say, the new Microsoft Flight Simulator, but they’ll let the network’s engineers fine-tune the technology.

Of course, Facebook is also facing major trust issues in 2020. It should be clearer to the general public now than ever that games, like virtual reality or any other product the social network offers, is just another vector for gathering user data. That’s true for any platform where one can play games, of course, but Facebook specifically has drawn fire before for its irresponsible handling of that data.

Even still, with 5G poised to take off and interest growing in bringing games to a wider variety of screens and audiences, Facebook Gaming makes some amount of sense as a first step. Whether or not it takes off remains to be seen, but by starting small Facebook has given itself an easy out if the whole thing eventually does fall apart.

Score a new MacBook Pro for a whopping $500 off

The Police Can Probably Break Into Your Phone

ZenMate VPN is extending subscriptions for free this Black Friday

Razer Deathadder Falls to $24, Plus More Massive Razer Discounts in This One-Day Sale