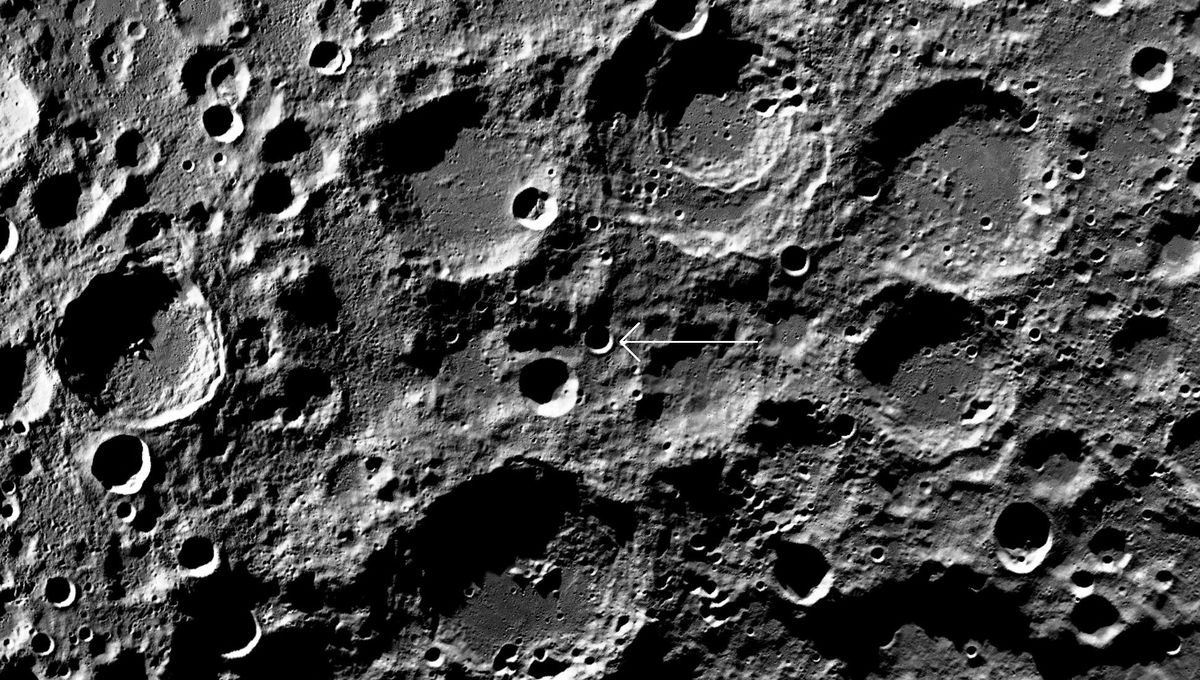 Only a handful of countries have sent probes to the Moon, and one of the more recent ones to join the list is India. Their successful Chandrayaan-1 mission went there in 2008, and their second, Chadrayaan-2, launched in July 2019 and arrived just under a month later.

It deployed the Vikram lander and Pragyan rover on 6 September, which heartbreakingly was not successful. The deployment went well, but shortly before landing a malfunction caused it to veer off course, and it hard-landed moments later. The craft were lost.

But the orbiter has been functioning very well*. It has an array of detectors onboard, including several cameras, that can map the Moon’s surface, perform mineralogical surveys, look for water ice in permanently shadowed craters, and more.

One of these is the Orbiter High-Resolution Camera (or OHRC), which, in the orbiter’s 100-km-high orbit, takes images of an area that’s 12 x 3 km, with a resolution of roughly 30 cm. That’s the size of a small beach ball, so that’s impressive.

On 5 September, 2019, it took an image near the south pole of the Moon (at a latitude of 74.6° South, so just about 100 km north of the south pole). The location of the shot is in the crater Boguslawky E, which is about 14 km across, so the OHRC sees a cut right across nearly the whole thing. The close-up of a section of the image is pretty nice:

That’s great! The resolution is really good; the scale bar is 25 meters, about the length of a tennis court. The Sun was extremely low (after all, this is near the pole!) so shadows are long. That accentuates topography, hills and craters, because the shadowing gives it more depth.

I was surprised at how smooth the surface is; any small hummocks or pits should be obvious in the low Sun, but it’s not that bad. You can see craters down to the resolution limit, but to my eye there aren’t nearly as many craters as in some other areas.

The parallel features running from lower let to upper right look like ejecta to me, dust and rock blown out by a nearby impact. In the wider context shot you can see similar features running in the same directions, too.

You can see some small boulders, too, probably ejected from a nearby impact. In a different part of the image just a few hundred meters way things look different:

Oof. That moonscape is rougher, with a lot more boulders. Landing there would be a nightmare, though walking around would be cool.

The boulders vary in size more, with the biggest to my eye being the one below center; look at how much longer its shadow is than the others. You have to be careful there; the undulating surface means some shadows are longer because they fall on a slope, but even so that rock looks bigger, maybe 3 meters across and high? In the 1/6th gravity someone in decent shape might be able to even jump up to the top of it from the ground, except that a) spacesuits are awkward and bulky, making it harder, and 2) if you fall you could puncture your suit and die, so there’s that too. I don’t recommend trying.

Like everywhere on the Moon, some of the craters look soft and eroded; those are very old ones (like the one the big boulder’s shadow goes across). Even though there’s no real atmosphere on the Moon there’s still erosion. The solar wind and rain of teeny micrometeorites smooth things over the millennia, and even thermal expansion and contraction due to the day/night cycle can cracks rocks over time. Craters with fresher looking rims are younger; you can see a few like that in center right.

All in all, this looks a lot like images from NASA’s Lunar Reconnaissance Orbiter, and I say that with admiration. LRO is a magnificent machine, the culmination of years of experience in building spacecraft. Chandrayaan-2 is just the second spacecraft India has sent to the Moon!

Now in some ways this is not a fair comparison, since ISRO (India’s space agency) has learned from NASA, and the two spacecraft are doing two different things. Still, it’s impressive that India has gotten this far this quickly (and has a successful Mars orbiter as well). I wonder where they will be in, say, 20 more years?

*I’m reminded of ESA’s Mars Express, which also had an orbiter and lander; the lander’s solar panels didn’t deploy properly, dooming it, while the orbiter works very well and continues to send back data.