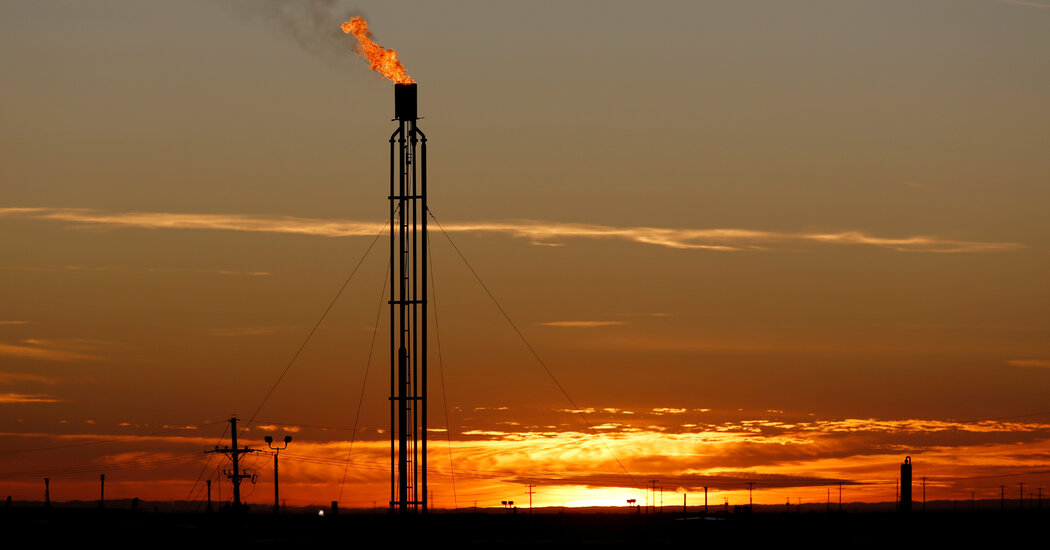 Across the United States, gas flares light the night skies over oil and gas fields — visible symbols of the country’s energy boom. They also emit greenhouse gases, making them symbols of climate change that many environmental groups would like to see snuffed out.

Now, a new study points to another problem: Pregnant women who lived near areas where flaring is common had 50 percent greater odds of giving birth prematurely than those who did not. These births occurred before 37 weeks of gestation, when incomplete development raises a baby’s chance of numerous disorders, even death.

“It’s on par with the increased risk you see for women who smoke,” said Lara Cushing, an assistant professor of environmental health sciences at the University of California, Los Angeles, and lead author of the study. Unlike smoking, however, “it’s not really something you can do much about on an individual level,” she said.

The analysis also found that the impacts of flaring fell entirely on Hispanic mothers, raising concerns about environmental injustice at a time when questions of racial inequality have gripped the nation.

Past research has shown that living near oil and gas wells increases the odds of adverse birth outcomes. The study, published last week in Environmental Health Perspectives, is the first to look specifically at flaring.

Oil and gas producers flare natural gas when it is too abundant to capture and sell, or when low prices make doing so unprofitable. Burning the gas prevents methane, a potent greenhouse gas, from escaping to the atmosphere, but it still releases planet-warming carbon dioxide and other harmful chemicals.

Dr. Cushing and her colleagues analyzed satellite images to track nightly flare activity across the Eagle Ford Shale in Texas, which can be seen from space as a crescent of twinkling lights between Laredo and San Antonio. In an earlier study, the researchers counted 43,000 flares between 2012 and 2016.

Over that same period, women in the region gave birth to 23,500 babies. The study found that the odds of preterm birth were 30 percent higher for mothers who lived within three miles of an oil and gas well compared those who did not, and 50 percent higher for women who were exposed to 10 or more flares over the course of their pregnancies.

It can be hard to tease out cause and effect in retrospective studies such as this, said Dr. Heather Burris, a neonatologist at the University of Pennsylvania’s Perelman School of Medicine who was not involved in the work. But Dr. Burris said the researchers did their best to rule out factors that might make some women prone to preterm birth, like age, smoking habits, socioeconomic status and access to prenatal care.

The Texas Oil and Gas Association did not respond to requests for comment.

Scientists do not know exactly why some women give birth prematurely, Dr. Burris said. But the new study adds to growing evidence that environmental factors play an important role.

In the case of flaring, researchers say the mechanism may involve particulate matter, volatile organic compounds and other toxic substances. “It seems pretty plausible that it would have an effect on premature birth given that air pollution and preterm birth are well linked,” said Elaine Hill, a health economist at the University of Rochester Medical Center who was not involved in the study.

The results highlight stark racial disparities in environmental health because the connection between flaring and preterm birth only emerged among Hispanic women, who made up a majority of the study population. Flaring did not increase the risk of preterm birth for non-Hispanic white women, who accounted for about a third of mothers in the study.

Dr. Cushing said there are several potential explanations. On average, Hispanic women experienced more flaring, and it’s possible that the effects only manifest above a certain threshold of exposure. Other studies have also shown that women of color are more susceptible to pollution. That may be because their bodies are already worn down by longtime health problems, exposure to other contaminants or chronic stress caused by discrimination, Dr. Cushing said.

Although the study didn’t address it, economics could also provide part of the answer, Dr. Hill said. If white women in the study were more likely to own land, and thus mineral rights, then the income bumps they received from oil and gas extraction could have offset negative health effects, she said.

Whatever the reason, Dr. Burris said the study suggests that flaring poses a danger to expectant mothers. “I wouldn’t go as far as to say that it’s safe for some women and not others,” she said. “No way.”

Flaring has increased in the U.S. in recent years, but there are efforts to curb the practice. Last week, a federal court blocked the Trump administration’s attempt to roll back Obama-era regulations that discouraged flaring. The Texas Railroad Commission, which oversees the state’s oil and gas industry, is also considering tightening flaring regulations.

Diana Lopez, executive director of the Southwest Workers Union in San Antonio, which advocates for environmental justice, said she hoped the study would bring new urgency to the issue by showing how vulnerable populations bear the collateral costs of fossil fuel extraction.

“That’s just a classic example of environmental racism,” she said.

Watch John Oliver’s stark, furious breakdown of the links between the RNC and Kenosha violence

These adorable slippers will make mopping your floors super fun