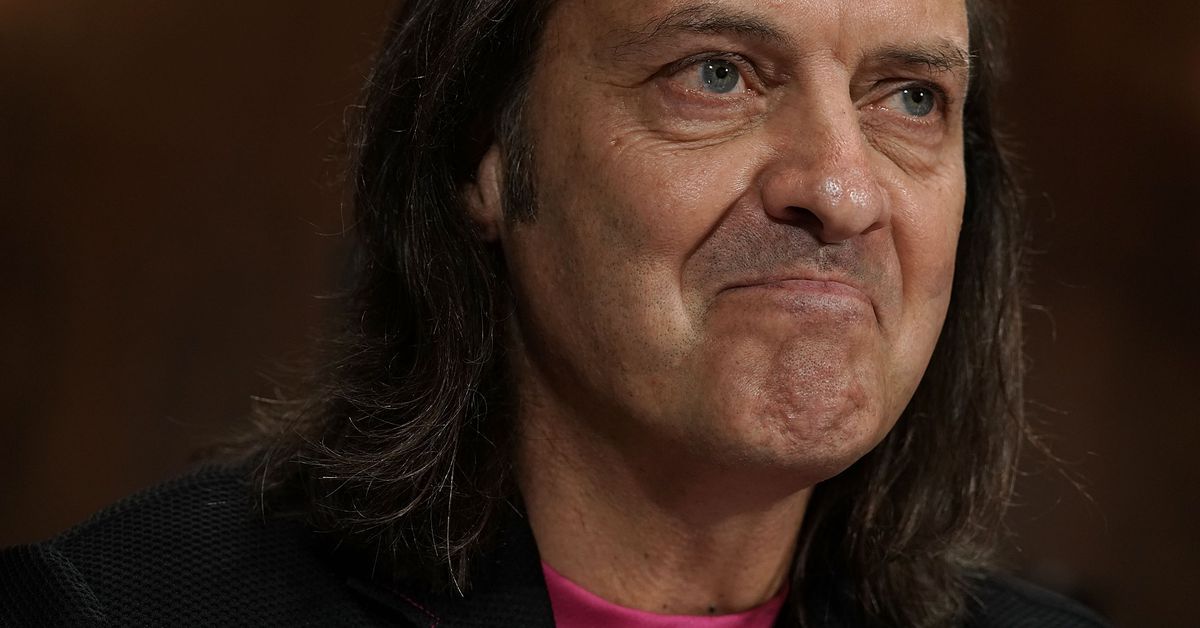 T-Mobile announced its plans for a 5G rollout yesterday, promising to launch “nationwide” service on December 6th. It’s much wider coverage than either AT&T or Verizon has promised, thanks in large part to T-Mobile’s use of the 600MHz spectrum it licenses. But even though T-Mobile appears to be doing better with 5G, there are still important caveats. We need to see it actually tested for speed and coverage, for one thing. For another, it’s only available on two fairly expensive phones: the Samsung Galaxy Note 10 Plus 5G and the OnePlus 7T Pro 5G.

In some ways, however, this announcement and even this deployment is a publicity stunt meant to drum up support for the merger with Sprint. T-Mobile has passed pretty much every regulatory hurdle — two days ago the FCC repeated its blessing. There’s essentially only one thing standing in CEO John Legere’s way, a lawsuit from 10 state attorneys general to block the merger.

The trial begins on December 9th, three days after T-Mobile says it’s lighting up its 5G network. What a coincidence!

T-Mobile is now engaged in a no-holds-barred campaign to win support for the merger from constituencies that might put pressure on those attorneys general to settle their case. Alongside the 5G rollout, T-Mobile launched an initiative it calls “5G for Good,” laden with programs that you would have to be a heartless jerk to criticize. I’m simply amazed at how brazen it is.

It came complete with a press release filled with diction, random capitalization, and exclamation points that are so Trumpian it seems custom-designed to bait our president into quoting it verbatim:

“We’re building a 5G network that will allow us to deliver future New T-Mobile moves that are going to be SO massive we couldn’t WAIT to share the first few. […] Only the New T-Mobile’s transformative 5G network will FINALLY have the capacity and reach to make the BOLD moves we announced today that are squarely aimed at SOLVING inequities that have huge impacts on our society. When it comes to wireless service, many have been taken advantage of, left behind or completely forgotten. It’s time for another wave of change and the New T-Mobile will be at the forefront of that!” said John Legere, CEO of T-Mobile.

The three programs T-Mobile announced are contingent on the merger. The company will only provide these services if it is able to complete its merger with Sprint. These programs are each cleverly designed to give T-Mobile instant rebuttals to potential criticisms of the merger. They’re so well-crafted that I can’t help but applaud how genius they are as pieces of propaganda. Even calling them “propaganda” makes me the asshole!

Let’s go through them each in turn and examine just why they could be effective.

This program is called the “Connecting Heroes Initiative” and it will offer a base level of free wireless service to police and firefighters throughout the country — with relatively inexpensive upgrades for data.

Recall that last year Verizon throttled data for California firefighters actively engaged in fighting the state’s wildfires. This move not only could gather support from local police and firefighters (who could put pressure on those attorneys general), it also is a not-so-subtle way for T-Mobile to position itself as the good guys compared to Verizon. Worried about T-Mobile doing bad things? It’s not like they’re Verizon!

On a larger level, though, the rhetorical kung-fu here is so blatant that I’m almost embarrassed to have to point it out: if you wanted to oppose this merger you will be vulnerable to accusations that you are not supporting our heroic first responders.

The number one accusation T-Mobile faces is that after the merger it will find ways to increase prices on its customers — customers who will have fewer alternatives because we’re moving from four big carriers to three. A $15/month plan is ridiculously inexpensive and so long as it’s around, T-Mobile can use it as a response to that accusation.

This proposal has levels. It’s designed to offer internet service specifically to children who wouldn’t otherwise have it, giving them access and helping them do homework. It’s also, I think, an indirect way to gesture towards the concern that big carriers aren’t doing enough to provide rural access.

It’s worth pointing out that all three of these plans are disingenuous as soon as you look at the fine print — which is the way with nearly all US mobile plans. The “heroes” are limited to 1GB a month, and it’s $15 to get 20GB. The kids are limited to 100GB/year, which is not very much data at all. And T-Mobile Connect only offers 2GB per month — which you could burn through in less than a day watching YouTube.

For a while now, this merger has had an air of inevitability. Sure, the 10 state AGs are going forward with the lawsuit, but it feels like it would take a miracle for it to successfully stop this train. It’s one thing for T-Mobile and Sprint to lobby the FTC, DOJ, and FCC — it’s quite another for it to challenge the states. An attorney general looks like the champion of the people when they take on a big corporation — will they look that way when firefighters are asking why they can’t get free cell phone service in an emergency?

Just last month, Colorado stopped opposing the deal because Dish Network (which is hoping to become a fourth network someday) promised to base its headquarters here. These new initiatives are a genuine good for cops, firefighters, and kids — but they’re also a perfectly targeted pressure campaign on the attorneys general who are trying to block the merger.

It’s not subtle. Then again, nobody’s ever accused John Legere of subtlety.

I would like to try to pithily capture all the Windows app platform / web stuff / 32-bit / ARM / confounding changes in direction / overall shiftlessness / uncertainty for consumers / fetishization of backwards compatibility / general nuttiness of what’s going on with this decision, but yeah, that’s a lot to synthesize. The article does a decent job of it, though.

+ Microsoft bet against Intel with its new Surfaces — and lost

Chaim Gartenberg is right — if Microsoft was hoping to put some fear into Intel this year, it has failed utterly. I bet that at Intel HQ somebody put up a banner reading “I TOLD YOU SO” in giant letters. They’re not entirely wrong — and after a year of ragging on Intel for failing to adequately innovate, I should eat a little crow. There’s something to be said for slow and steady — I think it’s too slow and too steady, but at least you know it’ll work.

I think Gates is engaging in more than a little revisionist history here. Just because Verizon may have screwed over Microsoft at around the same time it was screwing over webOS doesn’t mean that if it had gone another way that Windows Mobile would have succeeded. Verizon had already tried to anoint an iPhone killer before the period Gates is referring to: the absolutely atrocious BlackBerry Storm. If Verizon had picked WinMo instead of Android, it might have also been rejected.

In fact, as the founder and former Editor in Chief of a site called WMExperts that was exclusively dedicated to Windows Mobile, I can say with a high degree of confidence that while powerful, it was not ready for mainstream adoption.

Gates’ implication here is that if he had been paying more attention, Windows Mobile would have been a better product. I just don’t know if that is definitively true: Microsoft was producing a lot of stinkers in the late ‘90s and early 2000s. Regardless, it’s quite the condemnation of the rest of the company (Steve Ballmer especially) that Gates is saying the main reason it failed in mobile is because Bill Gates wasn’t personally working on it.

More from The Verge

Excellent analysis from Zoe Schiffer into an issue that you probably rolled your eyes at at first. But the censorship and global propaganda issues raised by TikTok are no joke.

Those surveillance concerns are much bigger than just TikTok. “The Chinese government has a history of gaining control over nodes in the information system,” said Sarah Cook, a senior research analyst for China, Hong Kong, and Taiwan at Freedom House. “They don’t always mobilize them right away to harm freedom of expression, until something threatening happens and then they do. It seems clear TikTok is censoring information related to the Hong Kong protests, but at the same time, even if it’s not happening that much now it’s really only a matter of time before it does.”

+ Never pay full price for a Pixel: The Google Pixel 4 will be up to $400 off on Black Friday

Have you noticed that Amazon is involved in more of these weird TV spats than Roku, Google, Samsung, LG, Vizio, or Apple? Because I have.

I am not kidding when I say that there should be an investigation from the FCC here. The companies that have bothered to commend have done so in the most terse, least illuminating way possible. Any time messages can’t get through a network, it’s a problem. SMS is often the last fallback option for lots of essential communications, not just texting between people. The stories of people receiving texts from deceased friends is heartbreaking, too.

The fact that all this happened with Valentine’s Day messages is also just bizarre. I don’t discount that SMS interchange is more complex than we assume — I still remember the days when an MMS from Sprint wasn’t compatible with an MMS from AT&T. But that very complexity means that we have to trust these companies to transparent. And not for nothing: we are still waiting for the next federated messaging model to launch, the RCS joint venture these companies just announced.

Sam Byford likes the radically curved screen. I do not. To each their own.

There’s no practical benefit to the Nex 3’s waterfall display, but there isn’t really much of a drawback, either. Vivo has done a good job making the Nex 3 easy to use without compromising how you’d expect a phone to work, so the only thing that really matters about the display is whether you like the way it looks.

Andrew Webster asks Bowser (yes, if you haven’t heard, that is really his name) about all the important questions: multiple accounts, joy-con drift, and 3DS support.

+ The wonderful world of Chinese hi-fi

I love this story — people competing to find the best audio gear for ridiculously cheap by hunting down companies using components from much more expensive headphones. The combination of online communities, global capitalism, and audio nerdery is well worth your time.