The Razr’s Back, Flipping Open an Old Love Story 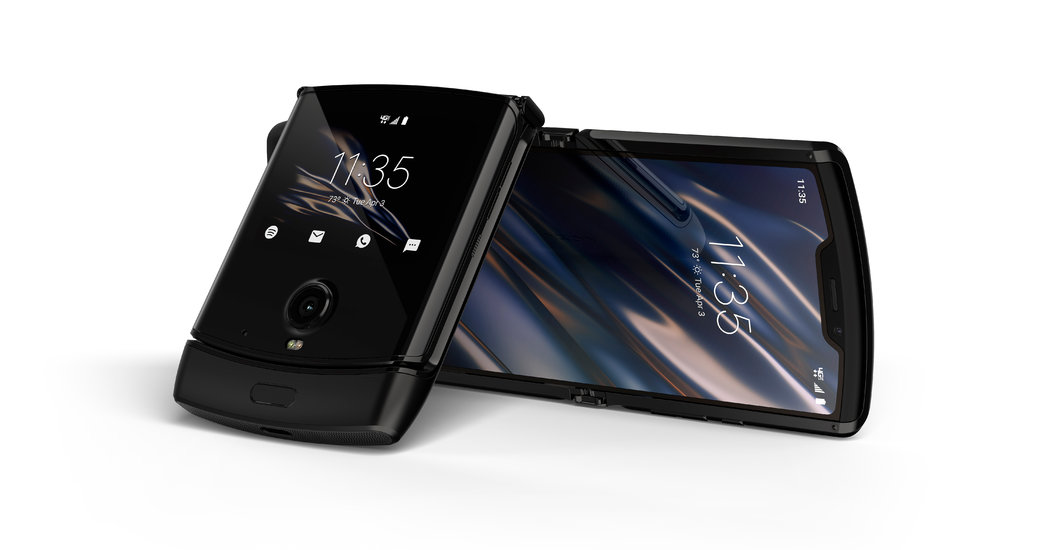 Everything old is new again, sort of. Television shows from decades ago are getting the reboot treatment. Animated films from yesteryear are back in theaters with a digital makeover. And now the Razr, the unmistakable slim flip phone from the 2000s, has returned, hoping to ride the fad for foldable tech back into people’s pockets.

Motorola announced the phone’s revival on Wednesday. Packed into its familiar retro clamshell design will be an Android operating system; two screens (a 6.2-inch touch-screen one on the inside and a 2.7-inch external one); and a lengthy list of other features that may or may not pull in millennials and lure away iPhone users.

The price of this nostalgia is $1,499, slightly more than the most expensive version of Apple’s iPhone 11 Pro Max. Consumers can begin preordering the device on Dec. 26 through Verizon, according to a news release.

The original Razr, released in 2004, came in nearly every color and was adored by millions for its sleek design. (David Beckham even filmed a commercial for it.) In 2004, the aluminum device was the thinnest phone on the market, according to CNET. For many Razr users, angrily flipping the phone shut — no need to press “end” — was the best way to cut short an annoying call.

A CNET reviewer summed up the device: “Streamlined. Utterly pocketable. Nostalgic, with a sharp futuristic edge.”

The future of foldable phones was called into question this year after the release of Samsung’s Galaxy Fold. It generated a lot of attention, both for its design and its nearly $2,000 price, but it spiraled into a public-relations nightmare. Reviews slammed the screen’s quality and ultimately sank the phone’s reputation.

Huawei is rolling out its Mate X foldable phone in China, but it has yet to hit the market in the United States.

Sergio Buniac, the president of Motorola, told CNET that the company developed the new Razr after seeing a consumer need for foldable phones. “It’s not like we decided to relaunch the Razr and figured something out,” he said.

Asked how the company would position the phone, given that it brings back memories for a certain generation but has no significance for today’s teenagers, Mr. Buniac said: “Foldable is a technology that’s starting. We believe there are so many options and avenues with that, so we have to think about new consumer segments as we move forward.”

Mr. Buniac said he saw the Razr as a franchise.

The phone was originally set to be released in the summer, but it was delayed until January.

“We are two or three months behind,” Mr. Buniac said. “That’s O.K. It’s new technology. There are good days and bad days, but we want to feel that it’s really mature before going to market.”

The company’s gambit seemed to be resonating with social media users on Thursday. One woman said on Twitter that her first thought about the phone’s release was “that’s hot,” a possible nod to Paris Hilton, a noted Razr user in the 2000s.

“I loved my hot pink Razr man,” another woman said on Twitter. “Flipping that thing closed felt so powerful!”

Others zeroed in on the price. “Loved the phone. Not the price,” one man on Twitter said of the new phone. Another man was more frank, calling the price “silly.”

A review by Tech Radar said Motorola’s new Razr was a “bold experiment” for keeping an old look and added that the phone inherited the original version’s early reputation “as a pricey status symbol.”

Digital Trends put it this way: “The Motorola Razr relies a lot on design and nostalgia to win over fans.”