The Tech You Love 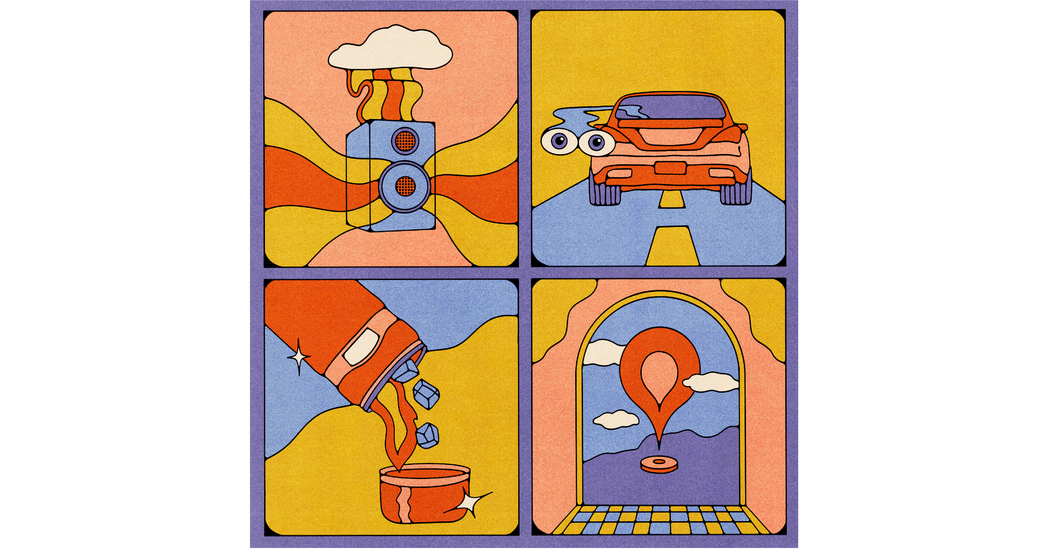 Everything in life has trade-offs. You can eat that delicious ice cream, but at a cost to your waistline. In technology, the trade-offs can be dire. The cool and useful technology you love might accuse the wrong person of a crime or enable four companies to have vast influence over our lives.

But look, I’ve been writing a lot recently about the downsides to our (metaphorical) waistlines from technology, and I wanted to indulge in a little ice cream.

So I asked our On Tech readers to tell us about the technology that makes their life fabulous. About 100 of you had suggestions, from the universal to the obscure. One reader waxed poetic about the thermos, which is not what I had in mind but I WILL ALLOW IT. (A fancy Japanese travel mug is my favorite possession.)

Thanks to our On Tech editor Hanna Ingber for picking a selection of gems. They have been lightly edited. Wave hello at Hanna through your screen.

The tech invention that makes my life fabulous is LiveBarn, a subscription streaming service that puts remote-controlled cameras in hockey rinks around the country and in Canada so that I can watch my grandchildren play whenever they are not local. — Max Goldsmith, Newton, Mass.

I still play Pokémon Go daily more than four years after its launch. It gives me an incentive to get outside, explore cities and find new places. I’ve made new friends while playing. I traveled to Chicago last summer for the game’s annual festival. Most importantly, while I’m playing I can’t be using other social media on my phone. — Jason Weill, Seattle

For me, GPS has to be the winner. Getting directions on my phone has enabled me to see places I would otherwise never have seen, get places I needed to with optimal speed, find family members and get them help in record time in emergency situations. It even helped me find my car in an airport parking lot. I find I go more places with confidence and spontaneity when the downside risk of getting lost is eliminated. — Linda Abraham, Tiburon, Calif.

I am a 73-year-old woman living alone with chronic health issues. Ever since my first candy-bar phone, I have felt safer because help is just a phone number away, even on the most deserted road. The confidence and self-reliance my phone affords me cannot be overstated, but I think it makes my son who lives 850 miles from me feel better too. — Barbara Sloan, Conway, S.C.

As an avid reader, I was sure nothing could surpass the feel of a paper book in my hands … until I experienced the ease of binge reading an entire series over the course of a weekend without leaving the house because I can purchase each new book instantaneously. — Jen V., Cedar Rapids, Iowa

I became a paraplegic 15 years ago. Ebay and Amazon have been instrumental in allowing me to be a fussy shopper without leaving my home. — Derek Porritt, Toronto

A little over a year ago I purchased a late model car that has blind-spot detection technology, and it’s great! It has saved me (several times) from being hit by drivers either trying to pass on the right or from cars traveling in my blind spot in a left hand lane that sped up when I put on the directional signal. — Steve Filipek, Hastings-on-Hudson, N.Y.

When traveling to places where I don’t speak the language and people don’t speak English I really appreciate having Google Images, because you can just show them a picture of what you want and hand signs will fix the rest! This would of course work with any search engine. — Zhuzhell Montano, Braunschweig, Germany

Online mobile device bank deposits are a terrific improvement over mailing in or going to the bank to make deposits. — Robert Breuer, Berkeley, Calif.

Spotify, the streaming service that compiles any possible song I could want or think of, has instrumentally improved my life, made doing chores easier, and provided the jams and soundtrack for my most exciting nights and times. — Stephanie Christensen, Phoenix

I’m a widowed great-grandmother in my tenth decade, living alone. My family is scattered all over the globe. WhatsApp, FaceTime, Zoom and Google Meet (with instant captions) have been a lifeline for me. Seeing my children and grandchildren’s faces and talking with them on a regular basis, sometimes daily, has made the lockdown and isolation bearable. I’m aware of the nefariousness of Big Data. But this technology cancels it out for me. — Blanche Korngold, Brookline, Mass.

Buying TikTok might be a steal AND a nightmare

Microsoft has been the shining star in the strange saga of the U.S. government forcing the Chinese app TikTok to sell part of itself or leave the country.

Microsoft has a shot at buying parts of TikTok, one of the biggest app breakthroughs in years, for what could be a lowball price because of White House intervention. Or … maybe this steal is really a nightmare?

Here are three potential minefields that Microsoft might be wading into:

Is Microsoft buying a husk of an app? As my colleague Kevin Roose wrote in his latest column, part of TikTok’s success is its computer formula that shows people one video after another tailored to their tastes.

Microsoft is negotiating to buy the TikTok app in four countries, with its current owner, ByteDance, keeping the rest. Kevin asked whether Microsoft would get the keys to TikTok’s algorithm in a possible takeover. If not, Microsoft might be paying a ton of money without getting TikTok’s secret sauce.

Owning an online gathering place is a nightmare: Greg Bensinger, a member of The New York Times editorial board, asked whether Microsoft is prepared to take over TikTok and deal with dangerous PizzaGate conspiracies, bullying of children, misinformation about the coronavirus and many more horrors.

Because Microsoft mostly sells boring software to businesses, it has largely been left out of the recent questions about whether America’s tech giants are too big or bad. Does Microsoft see the constant hot water that Facebook is in and think, “Yes, please?”

The possibility of retaliation from (at least) one government: Imagine a year from now if Microsoft does something that annoys a U.S. government official. I can already see the tweet or a speech in Congress that says, “The U.S. government handed Microsoft a deal of a lifetime, and now it’s betraying us by [fill-in-the-blank grievance].”

In politics, good deeds — and pushing TikTok into Microsoft’s arms might count as a good deed — usually come with strings attached.

A fuzzy duckling runs (or wobbles) up and down a path.

What shows are where? Your guide to NBC's Peacock, HBO Max, and more streaming services

Breaking Down the Spice, Worms, and Pain Boxes in Dune’s First Trailer

The 17 best tweets of the week, including beans, Trump memes, and Speed Racer