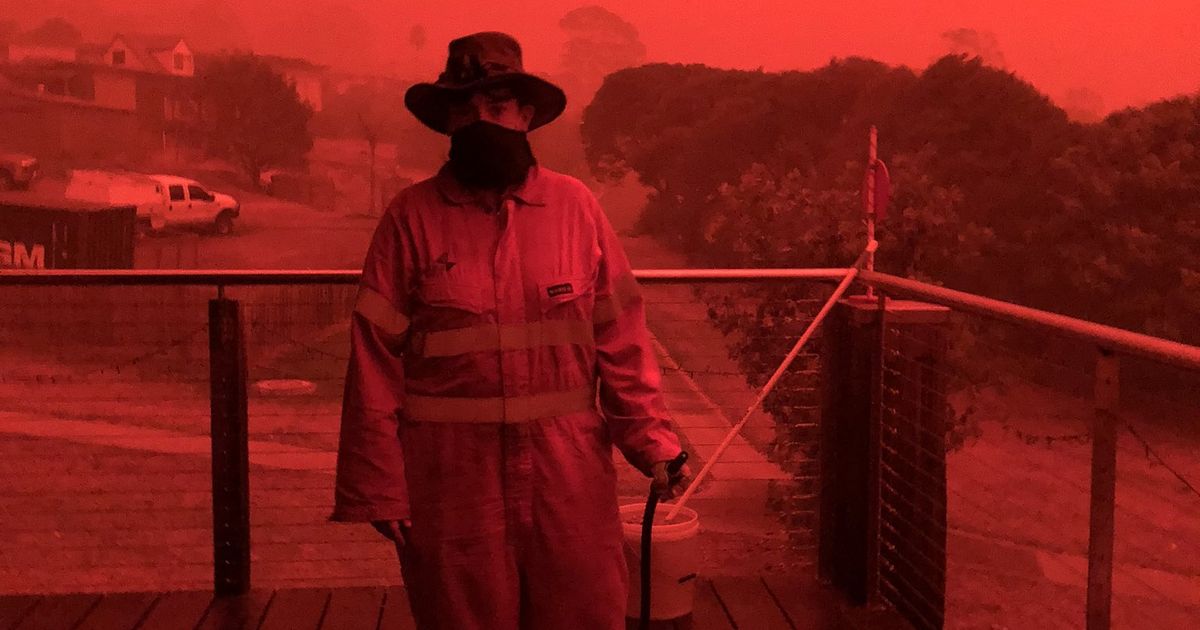 The sun didn’t rise on New Year’s Eve. The summer morning in a small beach town on the east coast of Australia looked like a winter’s night.

That black sky soon gave way to a blazing, eery orange as the flames approached. At least 4,000 people were told to jump into the ocean. Gas cylinders could be heard popping like fireworks as they exploded.

The town of Mallacoota looked apocalyptic on Tuesday local time as it became the latest victim of Australia’s out-of-control bushfires.

It was too late to evacuate.

“We are one road in, one road out. That road’s been blocked for hours and hours and hours,” Francesca Winterson from Mallacoota Community Radio told News Breakfast, a national TV broadcast.

“[T]he emergency services sounded their sirens all around town, telling people that’s it, get into your safe place.”

Mallacoota has over 1,000 residents, and is also a popular camping destination during the Christmas and New Year holidays, leading to a surge in population.

“At that point, I was praying. I was an atheist. I was praying to God, praying to Jesus, turn the wind,” David Geoffrey, owner of Mallacoota’s Wave Oasis bed and breakfast, told Australia’s ABC News.

Strong winds, lack of rain, and a historical heatwave have exacerbated Australia’s bushfire crisis, spreading the fires with incredible speed. At least nine people have died so far, including three volunteer firefighters. Over 11 million acres have burned, with approximately 900 homes destroyed in the state of New South Wales alone. Escape routes have been blocked, towns engulfed.

“[T]hey wanted us to get into the water, get against that [rock] wall,” Geoffrey said. “It’s got oysters and stuff, not the greatest thing to do but it will save you from radiant heat, it’s a barrier. So we were ready to jump in. And everyone was all along the edge, ready to go.”

“It was pitch black until about five minutes ago, now the sky is red,” resident Mark Tregellas told ABC Gippsland just before 10 a.m. “It’s starting to get embers coming out of the sky, the wind is coming directly at us from the west so everyone’s about as prepped and ready as they can be.”

#Mallacoota sky has lightened up to a pale orange now. Some smoke blown away by strong cool wind. Somewhat perplexing that we’re hearing of so much damage around town but haven’t seen the actual fire front ourselves. Then again, there are reasons we picked this place to defend pic.twitter.com/X4VJBvhpKv

11:25am update from Dad at the wharf in Mallacoota “I think its here. Both the bowling club & the golf club are gone. Gas cylinders exploding. Some houses are gone. Highly likely that my house has gone.” #Mallacoota #bushfirecrisis

The Stretchers for Nintendo Switch – Nintendo