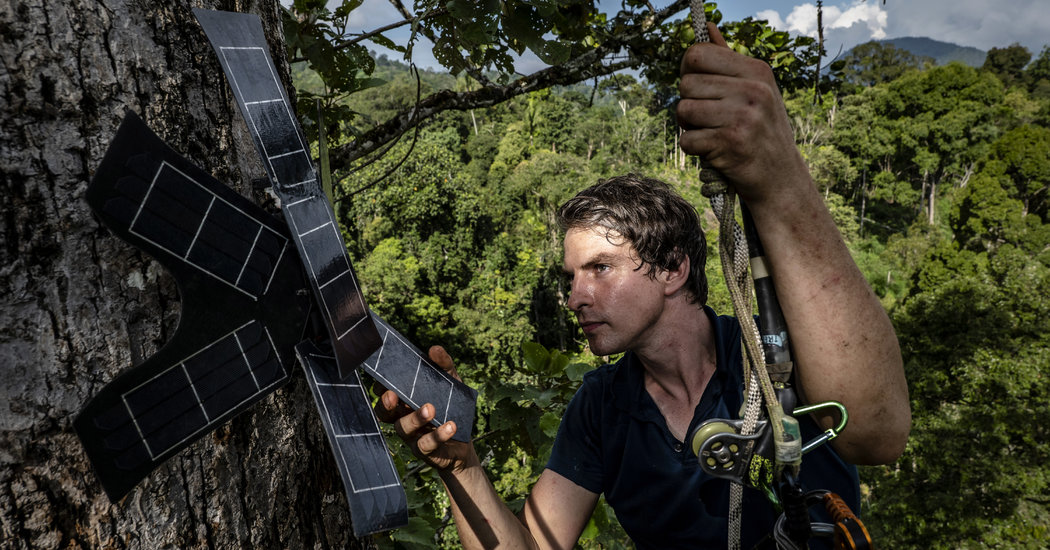 Want climate news in your inbox? Sign up here for Climate Fwd:, our email newsletter.

PAKAN RABAA, Indonesia — This village in West Sumatra, a lush province of volcanoes and hilly rain forests, had a problem with illegal loggers.

They were stealing valuable hardwood with impunity. At first, a group of local people put a fence across the main road leading into the forest, but it was flimsy and proved no match for the interlopers.

So, residents asked a local environmental group for camera traps or some other equipment that might help. In July, they got more than they expected: A treetop surveillance system that uses recycled cellphones and artificial intelligence software to listen for rogue loggers and catch them in the act.

“A lot of people are now afraid to take things from the forest,” Elvita Surianti, who lives in Pakan Rabaa, said days after a conservation technologist from San Francisco installed a dozen listening units by hoisting himself nearly 200 feet into the treetops. “It’s like the police are watching from above.”

The project, experts said in interviews, illustrates both the promise and perils of using artificial intelligence in the complex fight against deforestation.

“We know where the big illegal logging is happening. We can see that from satellite imagery,” said Erik Meijaard, an adjunct professor of biology at the University of Queensland in Australia and an expert on forest and wildlife management in Indonesia. “It’s in the next steps — following up, apprehending people, building a case in court and so on — where things generally go wrong.”

The outcome matters for global warming. Tropical deforestation is a major driver of climate change, accounting for about 8 percent of global emissions globally, according to the World Resources Institute, and forest-based climate mitigation accounts for a quarter of planned emissions reductions through 2030 by countries that signed the Paris climate accord, the 2015 agreement to reduce global greenhouse gas emissions.

Audio-based artificial-intelligence applications are already being used at sea to study whale behavior and the ecological effects of offshore energy exploration, among other things. But the treetop monitoring systems are relatively new and a potentially important innovation in the fight against deforestation, which typically relies on drones, camera traps and satellite images.

Rainforest Connection, a nonprofit group based in California and founded by the technologist, Topher White, has installed more than 200 of the treetop monitoring units in a dozen countries on three continents since 2016.

The concept behind Mr. White’s project is simple: Used cellphones, powered by solar panels, upload audio data. It is analyzed in real time by artificial-intelligence software capable of distinguishing the sounds of chain saws, logging trucks and other telltale audio signatures of illegal activity. The software then sends rangers instant alerts, through a specialized app that, in theory, could help them make arrests.

Mr. White, 37, said he thought of the concept in 2011 while volunteering at a gibbon conservation project in Indonesian Borneo, another island in the archipelago. He later left a communications job in France and began building early prototypes of forest surveillance units in his parents’ garage in the Haight-Ashbury neighborhood of San Francisco.

Because uploading real-time data from phones requires a steady power supply, a key challenge was figuring out how to power the units with solar panels in the shade of a tropical tree canopy.

Ordinary solar panels, designed to be used in the open, are not effective at caching the dappled light that filters through the canopy. After months of trial and error, Mr. White came up with a curved, petal-shaped solar apparatus that could pick up the short-lived “sunflecks” that filter through the jungle treetops.

“It doesn’t look like much,” he said of the petal-shaped units, which can supply enough power to upload about 200 megabytes of audio data over 24 hours. “But it doesn’t have to, because no one sees it.”

His nonprofit group, Rainforest Connection, raised $167,000 in a 2014 Kickstarter campaign, and has worked primarily in Africa and Latin America. It now has an annual budget of more than $1 million and receives funding from Google, Huawei, Hitachi and other corporations and foundations.

As of early 2019, the group’s surveillance systems covered a forested area of nearly 1,000 square miles, about twice the size of Los Angeles. Rainforest Connection uses Google A.I. software to filter out the sounds of chain saws and other logging noises that would otherwise be indistinguishable from the cacophony of the jungle. Each unit can detect such noises up to roughly a mile away.

Illegal logging accounts for about 50 to 90 percent of logging in many tropical countries, and around 15 to 30 percent globally, according to a 2012 report by Interpol, the international police organization, and the United Nations Environment Program.

For now, though, the group’s primary focus remains strengthening law-enforcement capabilities in tropical forests affected by logging, mining and poaching. (Legalized deforestation is also a huge problem, experts say, but it requires policy solutions rather than law enforcement ones.)

Luisa Ríos, a regional coordinator for SPDA, a Peruvian nonprofit group that provides legal support to communities affected by illegal logging and mining, said alerts from Rainforest Connection systems had recently helped local rangers catch and arrest two members of a logging syndicate that had been operating for years with impunity.

Ms. Ríos said that a pending legal case against the loggers could eventually help prosecutors build a bigger one against the syndicate’s leader. “Either way, the next time he’s going to think twice before he sends people to cut trees in that place,” she added.

But Mr. White said that, for every success story, there were setbacks. In Peru, for example, Rainforest Connection’s surveillance systems detected logging activity outside the boundaries of the protected areas where local rangers had jurisdiction. And in Ecuador, rangers told him they were too scared to confront the armed poachers they knew were afoot.

“The question is whether this technology can reach a point where it can fly on its own and be useful on its own,” Mr. White said. “And I think there are some partnerships where we see that working, but the only way for us to know is to allow some implementations of it to not work.”

During a recent trip to Sumatra, he installed a dozen surveillance systems in community-managed forests on the outskirts of four villages, including Pakan Rabaa.

Installing the software — by using rock-climbing equipment to ratchet himself up a rope, nearly 200 feet into the treetops — went smoothly enough despite the stifling heat and the leeches that crawled into his boots.

But in Pakan Rabaa, Mr. White’s technical presentation on how his software should be used was peppered with technical terms that might have confused someone with a Ph.D. The forest patrollers in the audience, who make their living by rice farming, were understandably baffled.

“That stuff is too complicated for me,” said Ujang, one of the local rangers, who goes by one name. “I’ll just keep patrolling.”

The local rangers were also disappointed to learn that, because phone signals were patchy in the nearby forest, the surveillance gear would be useless in a cellular dead zone where loggers liked to illegally harvest cinnamon and rattan — the very activity villagers feared would destabilize local watersheds and exacerbate seasonal flash floods.

An even greater challenge was that illegal logging is rarely prosecuted in Indonesia, and the patrollers had only partial law-enforcement powers.

“Can you just make a tool that will turn off the chain saws?” Ms. Surianti’s husband, Zulsafrihardi, the secretary of the village’s quasi-official Community Forest Committee, asked Mr. White at the end of the presentation.

“It’s only you who can actually stop it,” Mr. White said.