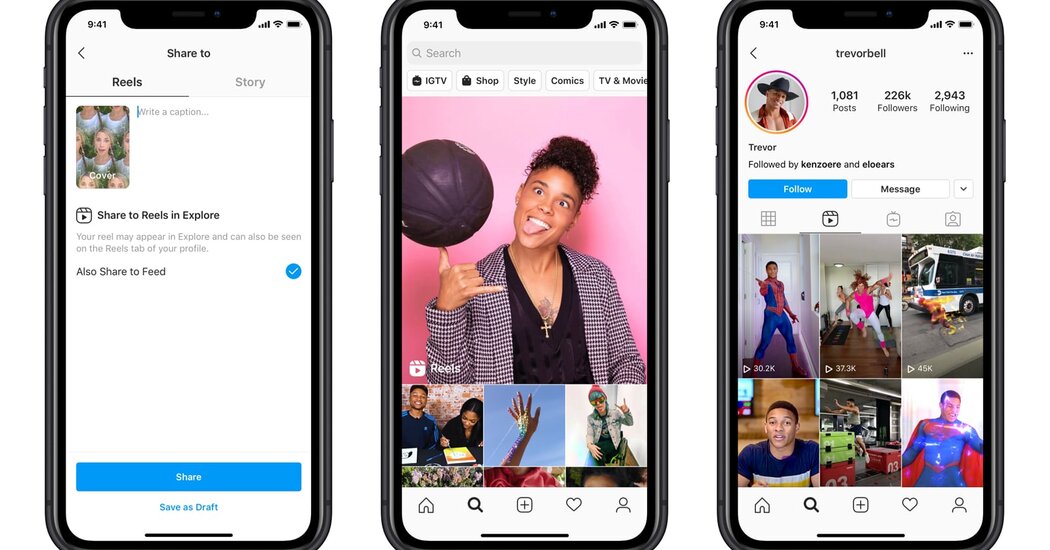 SAN FRANCISCO — As the Chinese-owned video app TikTok works to head off the threat of a ban in the United States, Facebook has sensed opportunity.

On Wednesday, Instagram, the photo-sharing app owned by Facebook, released Reels. Just like TikTok, people can use Reels to create 15-second videos that are designed to be easily shareable. And just like TikTok, Reels allows users to sync up their video recordings with clips of music or audio files that they record themselves, while adding other effects, like augmented reality filters.

The timing of the release couldn’t be more on the nose. TikTok has been struggling through a geopolitical morass with President Trump. The White House, which has said TikTok is a national security threat because of its ownership by the Chinese internet company ByteDance, has said the app must sell its U.S. business within 45 days or face a ban.

Reels will be available widely starting Wednesday in more than 50 countries, including the United States, Britain and Japan. It will also be featured in India, one of Facebook’s key growth areas. In June, TikTok was banned in India as part of a crackdown on many Chinese apps.

“TikTok is doing big things in this format, as have apps and features like Snap, YouTube and others,” Instagram said in a statement. It added that it had also seen the rise of short-videos on its service. “No two services are the same and this responsiveness to consumer demand is competition at work and one of the longtime hallmarks of the tech sector,” it said. “It increases choice, which is good for people.”

Facebook has a history of cloning features or apps from its competitors. Mark Zuckerberg, chief executive of Facebook, rolled out a product called Stories for Instagram and Facebook in 2016 and 2017, respectively, as a response to the rise of the app Snapchat. Stories was a near-exact copy of Snapchat’s Stories, which let people chronicle their days and can be set to disappear.

In a memo to employees this week, executives at TikTok’s parent company criticized Facebook. Zhang Yiming, chief executive of ByteDance, said that he wished to expand as a global company but that TikTok faced an “intense international political environment, the collision and conflict of different cultures, and the plagiarism and smear of competitor Facebook.” Mr. Zhang noted the “complex and unimaginable difficulties” his company has faced over the past year, and that it has only grown worse under the “unfair” treatment from the Trump administration.

In a congressional hearing last month with other tech chief executives, Mr. Zuckerberg pointed to China and products like TikTok as innovation that the United States should be worried about, and that TikTok’s ascendancy was grounds to avoid unduly harsh regulation against American companies.

TikTok has long been in Facebook’s sights. As TikTok grew rapidly over the past few years in the United States and elsewhere, Facebook also rolled out Lasso, another clone of TikTok, in 2018. But Lasso did not catch on with audiences and Facebook shut it down in July.

What Would Happen If Mark Zuckerberg Deleted All of Facebook?

5 significant history-making moments from the 2020 Emmys

All the best deals on home gym equipment

5 Things We Liked (and 3 We Didn't) About Netflix's Transformers: War for Cybertron - Siege

EarFun’s Wireless Buds Are Pretty Good, And You Can Save $14 Today

This Is a Story About Abortion, No One Will Read It