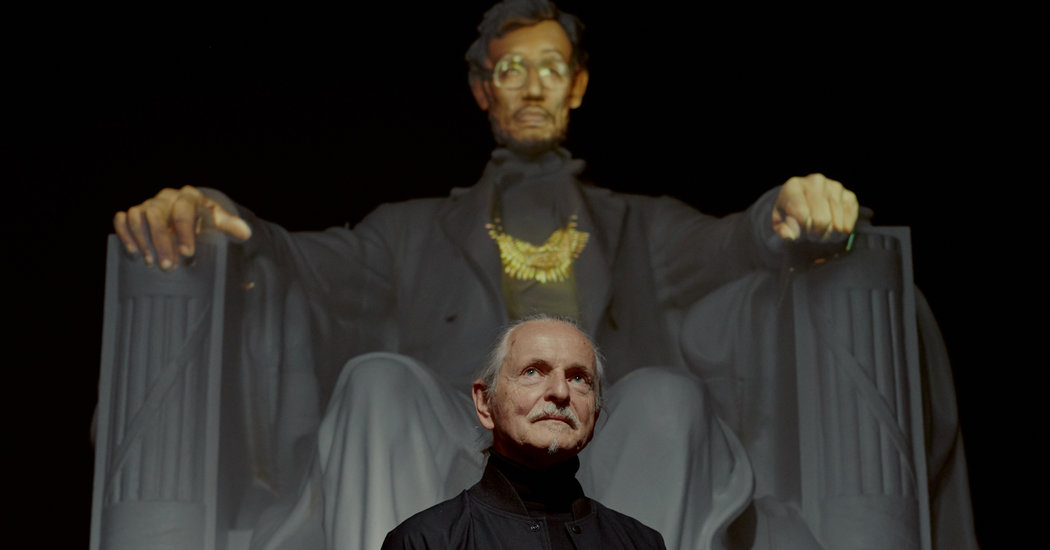 Long before monuments were generating debates, protests and headlines over what and who should be commemorated, the Polish-born conceptual artist Krzysztof Wodiczko was broadening the scope of what memorials around the world could be, taking them well beyond their makers’ intentions.

Since the 1980s, he has been projecting videos onto historical statuary and structures, making monuments into megaphones for the powerless in society. War veterans, Hiroshima survivors, the grieving mothers of murdered children, abused female laborers — all have proclaimed their personal stories from these pedestals.

“Monuments can be useful for the living,” said Mr. Wodiczko, 76, at his studio in the East Village, the New York neighborhood he has called home since 1983. (Mr. Wodiczko, who is married to the painter Ewa Harabasz, commutes each week to Cambridge, Mass., where he has taught for the last decade at the Graduate School of Design at Harvard University.) “Sometimes it’s safer and easier for people to tell the truth in public,” he mused.

Two socially and politically charged public projections are currently bringing new life to monuments in Manhattan. After dusk each evening in Madison Square Park, continuing through May 10, the faces and hands of 12 resettled refugees animate the 1881 bronze statue honoring Adm. David Glasgow Farragut, a Civil War hero, which was designed by Augustus Saint-Gaudens. The refugees, in a looping projection by Mr. Wodiczko, recount their harrowing journeys to the United States from their war-torn countries, including Syria, Guatemala and Mozambique.

“People don’t really know what it means to be stateless and to flee,” one participant from Burma said in a recent phone interview. (Like the other refugees in the video, her identity is cloaked to protect family members back home.) “It was an opportunity to tell people that refugees are not here just to take,” she added.

A man who fled from Afghanistan said by telephone that he found participating to be cathartic. “It was really important for me to get it off my chest,” he said. “No one in the world would ever choose to take refuge in another country. They will be compelled for whatever reason.”

In late summer, on Governors Island, Mr. Wodiczko hopes to launch drones equipped with screens that project the blinking eyes and voices of young immigrants. It is a new iteration of the project “Loro (Them)” presented in Milan last year. “The drones actually look at us and speak, like angels,” he said.

Intense during conversations, he is immediately engaging, and also mirthful. Mr. Wodiczko described himself as a refugee, but autobiography is not a part of his work. “I am against ego art,” he said.

“Krzysztof’s own personal story is so steeped in trauma and he has an incredibly special gift for coaxing this out of people,” said Jill Medvedow, the director of the Institute of Contemporary Art in Boston. She commissioned the artist’s “Bunker Hill Monument” in Charlestown, Mass., in 1998, a part of the city that had a high murder rate from 1975 through 1996 — and a rigid code of silence that left the majority of those murders unsolved. On the obelisk he projected bereaved mothers talking about their sons’ murders.

“What I remember most was that he got these mothers to speak,” Ms. Medvedow said. “It did bring people together to see it. It had a healing factor.”

Mr. Wodiczko was born in Warsaw in 1943, three days before the start of the Warsaw Ghetto uprising, the enormous act of Jewish resistance during World War II. His mother’s side of the family were among the thousands of Jews who perished. As a baby, he was hidden with his mother, then smuggled through the front line to the Soviet side with the help of his father’s family, who were Christian.

Mr. Wodiczko’s earliest memories were of returning to Warsaw after the war. “You’re just on the ruins of everything, human and physical,” he said.

The artist enacted his first public intervention in Poland in 1969 as a response to suppression under Communist-party rule. After receiving his graduate degree in industrial design, he created a headset and hand sensors that selectively filtered the sounds of the street as he walked through Warsaw wearing this equipment. “Personal Instrument” showed Mr. Wodiczko, like a conductor, exerting his freedom of choice, tuning out the “megaphones telling you how you should live” under the authoritarian regime.

In the mid-1970s, while working in Canada as a visiting artist, Mr. Wodiczko was called to the consulate in Toronto and told that the Polish government had decided for him that he lived in Canada permanently. “I was kicked out of Poland,” he said, incredulously. After that, he would have to apply for a visa to visit his homeland.

He moved to the gentrifying East Village. His first collaboration with a marginalized group began in 1988, when the homeless crisis peaked with the Tompkins Square Park demonstrations, near where Mr. Wodiczko lived in an apartment without heat. “Of course I had a much better situation than they did,” Mr. Wodiczko said of the homeless men he enlisted as consultants in the design of his “Homeless Vehicle.” The cart, with a missile-like projection, could be wheeled through the city and expanded for sleeping and bathroom facilities, as well as storage for can collections.

It wasn’t designed as a solution but to expose a situation “that should not exist in a civilized world,” said Mr. Wodiczko, who showed photographs of the men and these structures in an art gallery.

The vision of New York’s homeless pushing these vehicles was “a kind of nightmare,” said Manuel Borja-Villel, the director of the Museo Nacional Centro de Arte Reina Sofia in Madrid. The dystopia of the artist’s objects “is a key element that made his work very relevant in the 1980s,” he said, “and even more relevant today.” (Mr. Wodiczko received the Hiroshima Art Prize for his achievement in contemporary art and his contribution to world peace.)

In “A House Divided…,” which goes on view Saturday at Galerie Lelong in Chelsea, Mr. Wodiczko tries to mediate the polarization threatening to rip apart the United States.

For the first time, monuments will engage in a conversation. Two eight-foot-high models of Abraham Lincoln face off, each animated by projections of residents from Staten Island, which in the 2016 election split almost 50-50 along party lines. Mr. Wodiczko filmed people who know each other — friends, colleagues, even family members — expressing opposing viewpoints, which bounce back and forth across the twin Lincolns. Their responses show more civility than is typically depicted by the media, he noted.

“The dialogue is the issue here,” said Mr. Wodiczko. “This project is not curing the problem but more a recognition of somebody else’s point of view.”

At the Harvard Art Museums this fall, he plans to stage a debate with two replicas of a Gilbert Stuart painting of George Washington and projections of students exploring the meaning of democracy today.

Mr. Wodiczko’s large-scale installations sell in the low- to mid-six figures, largely to institutions like the Hirshhorn Museum and Sculpture Garden in Washington, Fundació Antoni Tàpies in Barcelona, Spain, and the National Museum of Modern Art, Kyoto in Japan.

A coming documentary by Maria Niro, “The Art of Un-War,” will explore Mr. Wodiczko’s 50-year career shaking up the public’s complacency around war. A focal point is his proposal, first made in 2010, to temporarily transform the Arc de Triomphe in Paris — glorifying the armies of the France’s Revolution and empire — into the World Institute for the Abolition of War. It called for this war monument to be enclosed in a latticelike structure that would allow the public to see its friezes up close while encouraging peace activists to gather.

This proposition “is a culmination of all his work,” Ms. Niro said. “He’s really questioning war in its entirety.”

Though it may never be realized during his lifetime, the proposal was “an inspiration and provocation,” Mr. Wodiczko said. “The main narrative of this Arc de Triomphe is that the path to peace is war, which is an absurd idea.”

The Arc de Triomphe is “the mother of all this nonsense all over the world,” he said. “Everything in this monument needs to be discussed.”

Through May 10 at Madison Square Park, Manhattan; madisonsquarepark.org.

Air Travelers Can’t See All of It, but More Tech Is Moving Them Along

‘Like a Scream of Resistance’: Rio’s Carnival in Bolsonaro’s Brazil

House Hunting in Japan: A Modern Ski Cabin in the Woods

What Does a Watchmaker Do? Behind the Scenes at Ole Mathiesen