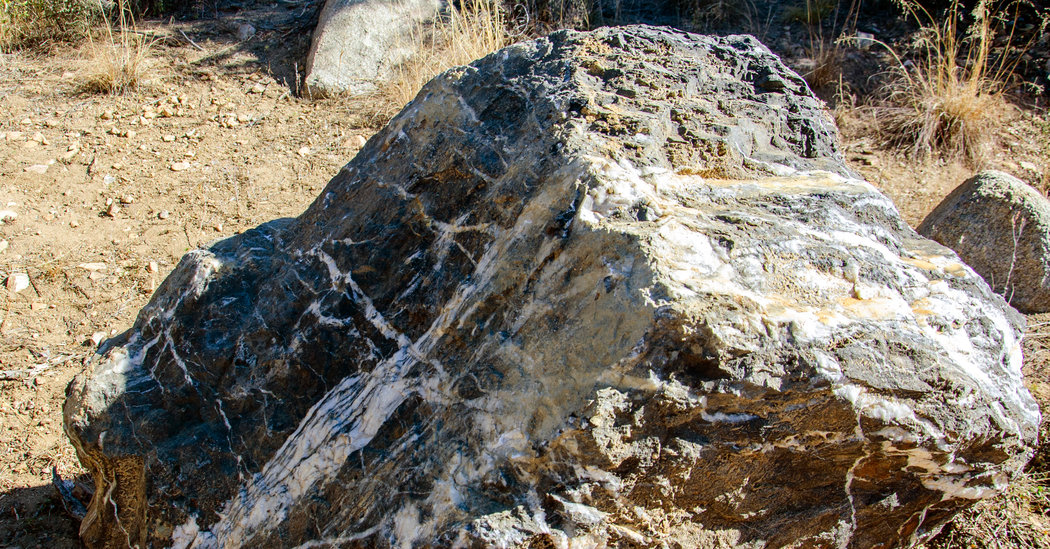 Drivers traveling along Route 89 in Arizona have seen it off the two-lane road.

A one-ton black boulder covered in streaks of white quartz sitting in an open meadow of lightly wooded trees outside Prescott, about 90 minutes north of Phoenix.

So when the boulder, fondly known to locals as Wizard Rock, suddenly vanished last month from the Prescott National Forest, forest officials were surprised: Who could move such a big thing without anyone noticing?

They sent out news releases and pleas on social media for its return.

And as stumped as they were that someone had swiped it, forest officials were just as astonished when someone returned the boulder, sometime during Halloween night.

“Maybe it’s magical,” joked Jason Williams, trails and wilderness manager at the national forest, which has 1.2 million acres outside Prescott.

Forest officials don’t know who took or returned the rock.

“We have no idea,” Mr. Williams said in an interview. “It was taken with a piece of equipment. Somebody loaded it up and hauled it off. The intention is unknown whether they actually knew it was a big deal or not.”

He said he and other forest officials were thrilled at the return of the boulder, which has become a local landmark. People often pull over at the side of the highway to marvel at the rock and snap selfies.

“We just appreciate that somebody saw the value it had to the community and decided to return it,’’ Mr. Williams said.

A forest employee on patrol Friday morning came across the boulder, which, Mr. Williams said, was about 10 feet away from its original spot.

“It’s a striking rock,’’ said John Heiney, community outreach manager and head of the tourism office in Prescott, which has a population of 46,000. “It was this big beautiful rock close to the road.”

“It’s something definitely people would go look for and take a photo,” he said in an interview. “To have a large specimen like this is unusual.”

So when the boulder went missing, the forest service asked for help.

“It’s unfortunate when we lose a treasure such as the Wizard Rock,” Sarah Clawson, district ranger for the Bradshaw Ranger District, said in a news release at the time. “These boulders belong to the public, and should be enjoyed by locals and visitors for years to come.”

Robert Coombs, a manager at the visitor and information center in Prescott, said the return of the Wizard Rock boulder was a good thing, but boulders have gone missing before.

In the last four months, there were two incidents of boulders weighing 750 to 2,000 pounds being swiped from the forest by people using heavy equipment, according to the national forest news release in late October.

In 2009, an 80-pound rock in the shape of a heart was removed from the Granite Mountain Wilderness. Forest officials also asked for the public’s help in that theft. An anonymous person returned the rock, Mr. Williams said. No questions were asked — the same with the Wizard Rock.

Permits are required to gather and remove most things such as rocks, firewood and trees from the forest.

Forest officials are looking to move the rock to a place where it can be more visible to the public.

“We are probably going to move it to one of our recreation sites that has a gate locked nightly,’’ said Mr. Williams. “We want to avoid other folks getting a kick out of moving the rock.”

In Amsterdam, Floating Homes That Only Look Like Ships

Tears for the Magnificent and Shrinking Everglades, a ‘River of Grass’

The Coronavirus: What Travelers Need to Know