28 BRILLIANT BODY TRICKS TO LOOK FLAWLESS IN NO TIME 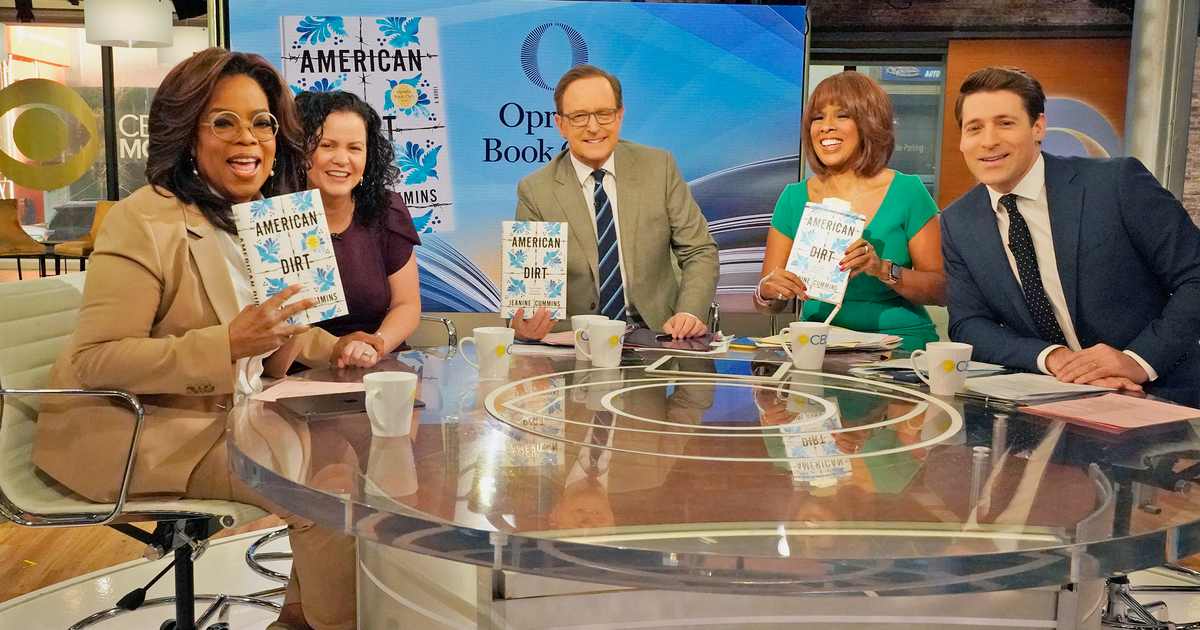 The first few pages of American Dirt, the new novel by Jeanine Cummins about a Mexican woman and her 8-year-old son who flee a drug kingpin for the southern U.S. border, begin with a jolt of adrenaline. The son, Luca, is standing over a toilet when bullets fly into the bathroom. He barely has time to register what’s happening — gunmen are murdering his family at a party — before his mother, Lydia, hurls them both into a shower stall to hide. It’s a gripping scene laid out with urgent prose.

It’s no wonder why Oprah Winfrey, who selected it this week for her book club, said she couldn’t put the novel down after those first pages. The story follows Lydia, a middle-class bookstore owner who unwittingly befriends the kingpin who ultimately kills her family, as she tries to escape Mexico with Luca by her side. Critics say the book’s depiction of Lydia’s experience reads like a “cheap-thrill narconovela” and feels like “the work of an outsider.”

But when Oprah announced the pick on CBS This Morning, she said, “Every night on the news, I think you hear so many stories, you hear so many migrant stories … you see the stories of the border, I thought this humanized that migration process in a way that nothing else I had ever felt or seen had … This story really changed me and changed the way I see what it means to be an immigrant trying to come to this country.”

That’s a powerful endorsement, especially coming from Oprah. But combining thrilling entertainment with the feel-good sensation of empathy can lead people to wildly problematic places (remember the movie Crash?), which is where we find ourselves with American Dirt.

It’s a familiar news cycle that too often gets reduced to an example of so-called cancel culture: Writer offensively portrays marginalized people without first-hand knowledge of said people’s lived experiences, is rewarded handsomely by their industry or peers, and those who might see themselves reflected in the writer’s narrative see a charlatan at work instead and voice their outrage over who gets to tell — and profit — from such stories. (Cummins received a seven-figure deal for the book.)

Some would have you believe that this debate is about cancelling Cummins and censoring anyone who dares to write about an experience they haven’t lived. The controversy will be blamed on “political correctness” or so-called cancel culture, making it easy for readers and fans to move past the outcry.

In fact, the anger is about who gets to publish whose stories and for what price. It’s about how quickly an author who takes on a subject written about by numerous Mexican and Mexican-American authors can find herself elevated above them all to Oprah Book Club status. And the controversy highlights people’s intense desire to avoid hearing something they love is offensive rather than take seriously the critics’ claims and genuinely explore why they must protest so loudly in the first place.

The backlash against American Dirt had been brewing since December, when the Chicana author Myriam Gurba published her scathing review of the book.

“That Lydia is so shocked by her own country’s day-to-day realities, realities that I’m intimate with as a Chicana living en el norte, gives the impression that Lydia might not be … a credible Mexican,” wrote Gurba. “In fact, she perceives her own country through the eyes of a pearl-clutching American tourist.”

Such critical perspectives have always existed in literature. Yet in an era where anyone can use the internet and social media as a bullhorn, those voices increasingly threaten power brokers, including publishers, agents, and publicists, and audiences alike because they insist on revealing, in the public square, the inadequacies and betrayals of stories that some feel compelled to fiercely defend. No one, particularly not Oprah and or her devoted fans, wants to embrace a book like American Dirt, feel good about themselves for having done so, only to learn that it’s reviled by many as inauthentic and even harmful to the very cause it seeks to champion.

Cummins has deflected questions about the criticism by saying it’s up to each reader to decide how they feel about the book, and that individual writers shouldn’t be made to answer for inequities created and perpetuated by the publishing industry.

“I was never going to turn down money that someone offered me for something that took me seven years to write.”

“I was never going to turn down money that someone offered me for something that took me seven years to write,” she said in a recent appearance.

American Dirt‘s publisher, Flatiron Books, said in a statement that it’s “[C]arefully listening to the conversation happening around the novel. The concerns that have been raised, including the question of who gets to tell which stories, are valid ones in relation to literature and we welcome the conversation.”

The outrage over the novel’s success prompted one writer to draft a form letter urging independent booksellers to read critiques of the book, recycle advertising materials for it, prominently display books by immigrant and Latinx authors instead, and avoid hosting Cummins. The director of McAllen Public Library, located on the Mexico-U.S. border, declined an invitation to celebrate American Dirt in partnership with Oprah’s Book Club.

“The numerous inaccuracies in her story are clear evidence of the white gaze, capitalizing on hurtful stereotypes and cashing in on human suffering,” she wrote. “After two sleepless nights and numerous conversations with my predominantly Latinx staff, I decided that I cannot – will not– endorse this book at my library.”

A “bridge” to where?

Cummins says she spent years researching the book and wrote it to be a “bridge.” She also fretted in her afterword that perhaps someone “slightly browner” should’ve written this story instead. That comment alone created a groundswell of distrust amongst the book’s Latinx critics, but Cummins had also previously written in 2015 that she thinks of herself as white and is uncomfortable talking about race. Since then, she began publicly identifying as Latina; her grandmother is Puerto Rican.

Meanwhile, she’s talked about the importance of writing a book like American Dirt with “tremendous care and sensitivity” but gushed on social media about a barbwire manicure that mimicked her book jacket art and gleefully shared an image of a barbwire centerpiece at a bookseller dinner. Such displays don’t exactly scream “tremendous care and sensitivity.”

In an interview, Bowles said he believed that American Dirt would’ve been well-received by critics like him had Cummins succeeded in writing the thoughtful novel she apparently thought she’d delivered to her publisher.

“I don’t think there would’ve been this backlash,” he said, adding that he believes writers can take on subjects outside of their own life experiences.

“I’m a big proponent of the idea that you can write outside of your lane if you do the work,” said Bowles.

Cummins did conduct extensive research in the process of writing her book. In 2015, she spoke to Norma Iglesias-Prieto, a professor in the department of Chicano and Chicana Studies at San Diego State University, whose initial support of the novel Cummins has used like a shield against criticism.

“I’m a big proponent of the idea that you can write outside of your lane if you do the work.”

“I resisted for a very long time telling the story from a migrant’s point of view because I was worried that I didn’t know enough, that my privilege would make me blind to certain truths,” Cummins said on CBS This Morning. “I expressed my concerns about this to [Iglesias-Prieto] and she said, ‘Jeanine, we need every voice we can get telling this story.'”

Iglesias-Prieto, who responded to questions by email, said that in general she supported Cummins’ interest in writing about immigration, partly because she had reached out to several experts in the field. That support, Iglesias-Prieto said, was for a research process that could lead to a well-founded narrative, not an endorsement of the novel that Cummins’ eventually wrote.

Iglesias-Prieto said that Cummins sent the book manuscript last year to her with a request to help spot problems in the portrayal of the protagonists and Mexican culture. Iglesias-Prieto did not have time to read the novel then.

“The responsibility ultimately falls on the author and her editors, of which I was not one,” she said.

Iglesias-Prieto quickly reviewed the book this week. While she demurred when asked about criticism of American Dirt‘s plot and characters, she agreed that critics are right to be skeptical of the book’s success.

My response as an immigrant and journalist to a book crowned the great immigrant novel of our times: When Latinos are shut out of the book industry, you end up with ‘American Dirt’ https://t.co/V5XCmqCWHd

“The debate about the book has opened a long-standing discussion about the topics that are extremely relevant and are of great impact: the obvious reproduction of the structure of power and of the inequality in the literary market,” she wrote in Spanish. “It is sad and bothersome to see that authors who have written very good novels, with years of literary experience, do not have the same support, attention, and recognition.”

Of particular concern to critics is the way American Dirt is being lauded as “extraordinary” (Stephen King) and “the great novel of las Americas” (Sandra Cisneros). White readers, they worry, will take the novel’s sensationalized portrayal as fact. The publishing industry will reap the financial rewards of having catapulted Cummins to fame and the same pattern will play out again and again in the future.

The voices protesting the book aren’t serving up “haterade” for the sake of it, as CBS This Morning anchor Gayle King (and Oprah’s bestie) suggested during the show’s segment on American Dirt.

Bowles would like the debate to focus on why and how the publishing industry anointed a book like American Dirt as a great novel about immigration. He’d like to see Oprah account for her book club choices, which he says have only included Latinx authors a handful of times.

So many folks whine about “mob mentality” & “cancel culture”

what about the power of tastemakers, influencers, celebrity endorsements?

Guess what. @OprahsBooks is somewhere between 20 & 100 times more influential in the market than ANY OTHER mechanism.

“I do think that she should have given a different approach to the criticism,” he said.

Even if she wouldn’t drop the novel as her official pick, offering readers a list of books by Mexican and Mexican-American authors and alongside American Dirt could create an important opportunity for audiences who wouldn’t otherwise be exposed to that literature.

“This is not cancel culture,” Bowles said. “It’s a privileged point of view to say that people should have absolute freedom to write whatever they want … without anyone saying, ‘Hey, you’re about to read a problematic book.'”