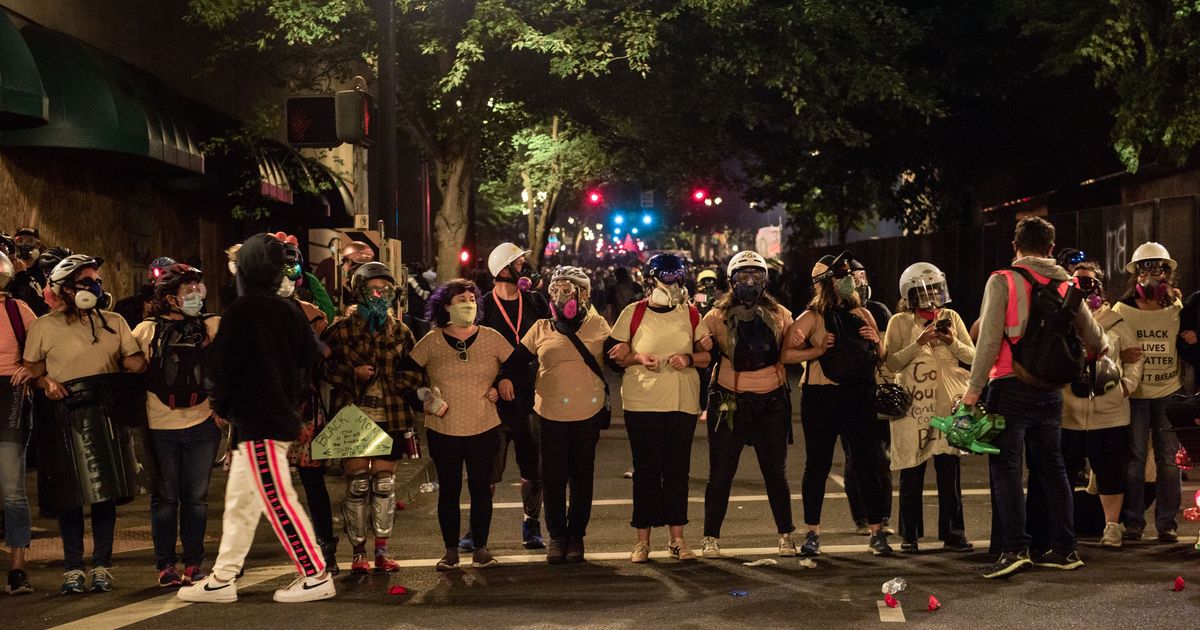 In response to the presence of federal agents at Black Lives Matter protests in Portland, a group of largely white moms, dubbed the Wall of Moms, organized to form barriers between demonstrators and federal agents.

From the group’s first appearance at protests on the weekend of July 18, the Wall of Moms was largely lauded in news outlets and on social media.

But just weeks after its formation, the group is facing allegations of “anti-Blackness” from Don’t Shoot Portland, a Black-led social justice and community organizing group.

On Wednesday, July 29, Don’t Shoot Portland shared an Instagram post chronicling the group’s troubles with the Wall of Moms, specifically citing a lack of safety protections for Black members at protests and a lack of consultation with Black leaders before filing business registrations.

Early in the formation of the Wall of Moms, Don’t Shoot Portland had agreed to partner with the group in order to help guide the group’s organizing efforts, according to reporting from Jezebel.

It was also announced that Bev Barnum, the group’s founder, who is Mexican American and describes herself as “white-appearing,” would stay on as an administrator.

The Wall of Moms wrote at the time that the decision was meant to serve as “a deepening of a powerful collaboration that will more firmly root us in our collective goals of ending racism, healing historic and ongoing wrongs, and doing the hard but much needed work of healing our society and world from the legacies of colonialism, racism, and white supremacy.”

In its post on July 29, Don’t Shoot Portland outlined the ways in which it felt the Wall of Moms’ leadership was failing Black organizers.

“We began having safety concerns within the group because Black women started saying they were not protected by WOM leadership,” the group wrote. “Too frequently [they] would be in communication for safety, transport etc. and when the time came, there would be zero response and no leadership to rely on. It’s put many on the ground in direct danger.”

In the post, the group announced that it was no longer working with the Wall of Moms, and urged others to stop supporting the group’s leadership as well.

Don’t Shoot Portland added that in addition to the lack of protection from leadership at protests, the group was concerned that Barnum made three business registrations with Oregon’s Secretary of State, one of which made the Wall of Moms a 501c3 nonprofit, per the Oregonian, without consulting the newly appointed Black leaders.

The three registrations signaled to Don’t Shoot Portland that the objective of the Wall of Moms was to get federal officers out of Portland, not to support the Black Lives Matter movement.

“You don’t need a nonprofit for that. You don’t need to discredit Black women for that,” Raiford told Jezebel. “Why would you make it about yourself when we’re already out here doing the work? Why try to co-opt that?”

Even before the filing, Jezebel notes that Facebook posts from Barnum, such as one that said “WOM is a group that supports BLM, but it is not a BLM group,” caused confusion among the group’s supporters and members about Barnum’s intentions with the Wall of Moms.

“The lies are finally clear and we are sad but ultimately not surprised that anti-Blackness showed it’s [sic] ugly face with Wall of Moms,” Don’t Shoot Portland wrote. “We need everyone to show up against racism, but it’s even more crucial to prioritize transparency and accountability.”

On July 29, following the allegations from Don’t Shoot Portland, the Twitter account for the Wall of Moms wrote that “lots of us are trying to regroup and do things the right way,” and asserted its support of the Black Lives Matter movement.

Hey team, by now y’all have heard about the drama unfolding. Lots of us are trying to regroup and do things the right way. No official announcements yet – standby. #BlackLivesMatter

Wall of Moms started with a social contract: Defer to BLACK voices. Shield BLACK bodies. The people who joined this movement of mothers did so under that understanding. The founder, Bev Barnum, decided to BREAK that social contract. #WallOfGloms

In replies to its tweets, the Wall of Moms account continued to reiterate that its views were separate from Barnum’s.

Since Don’t Shoot Portland’s post, some have announced resignations from their previous positions within the Wall of Moms group, or otherwise expressed a disavowal of the leadership.

When asked for comment, Barnum told Mashable via email that the allegations were “false.”

Mashable has reached out to Don’t Shoot Portland and @WallofMoms for comment.