A Connection Before the Coffee Was Cold 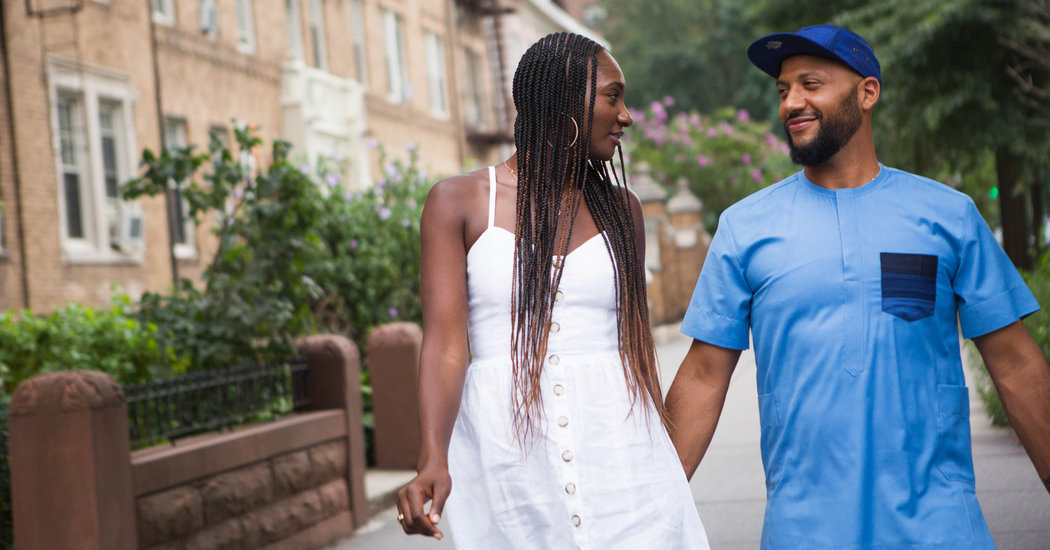 Rolake Bamgbose and Justice Whitaker, filmmakers from the West Coast, sat across from each other at a coffee shop in Brooklyn, engrossed in conversation.

“His eyes were very kind, and he spoke so openly,” said Ms. Bamgbose, 37. “He was genuine and spoke to me in a way that made it feel as if we were the only two people in the coffee shop.”

On that March day in 2018, they had only eyes for each other.

Ms. Bamgbose, a producer and director of documentaries and short films, including Bill Moyers’s “Rikers: An American Jail,” which premiered in 2016 at New York’s annual film festival, DOC NYC, had met Mr. Whitaker several days earlier on a dating app, and they soon realized they had both grown up in California, she in Los Angeles and he in Arroyo Grande, Calif.

At the time, they were both living in Brooklyn, though Mr. Whitaker was there only temporarily on a work project, which was winding down. He was preparing for a return to his life in Santa Fe, N.M., when they clicked into each other’s lives.

“She was very intriguing to me, her eyes, just drew me in,” said Mr. Whitaker, 38, the director of “Kut to Be the Best: The Last Black Barber Shop in San Luis Obispo,” an official selection of the San Luis Obispo International Film Festival, which begins next month. (He is also a founding faculty member of the Green School in 2006, an academy for environmental careers in Brooklyn, where he taught cinema production and media literacy.)

“Rolake also had a very regal nature about her,” Mr. Whitaker said. “She carried herself like a queen.”

Ms. Bamgbose left for a week to go surfing with a friend in Costa Rica, but when she returned, she and Mr. Whitaker went out twice before he completed his project, and went back to Santa Fe sky-high on believing that he had met his future wife.

“For the first time in my life,” he said, “I saw in a woman a life partner, someone I would like to have children with.”

Three weeks later, she visited him in Santa Fe for a weekend “that made us both realize we were going to be more than just a fling,” Ms. Bamgbose said.

They were engaged in May 2019 on a trip to Jamaica and were married Feb. 8 at the Ebell of Los Angeles, a women’s club. The Rev. Dr. Sharon Rhodes-Wickett, a United Methodist minister, officiated. A traditional Yoruba wedding ceremony was held later that day, with Yimika Olapo, the mistress of ceremony, officiating.

■ The bride graduated from Emory University and received a master’s degree in communications from Howard University. She is a daughter of Olayinka T. Bamgbose, a vice president and senior portfolio manager with the California Bank and Trust commercial banking group in Los Angeles, and of the late Dr. Olujimi O. Bamgbose, who was a clinical and forensic psychologist in private practice in Los Angeles.

■ The groom, who graduated from N.Y.U., is a son of Regina L. Whitaker of Arroyo Grande, and Geronimo A. Whitaker of Seattle. The groom’s mother, a community leader and activist in the City of San Luis Obispo, retired as a public-school teacher and health educator. His father retired as a physical therapist in private practice. His father also served in the First Air Cavalry Division as an infantryman in the Vietnam War.

■The groom’s paternal grandfather, James Whitaker Sr., trained at the Tuskegee Institute in aerial combat and served in the Pacific Ocean Theater during World War II.

Under the Stars with Shiraz and Scorpions

Simone Rachel Press and Michael Richard Foy met at the end of December 2016 after joining a tour group at ...